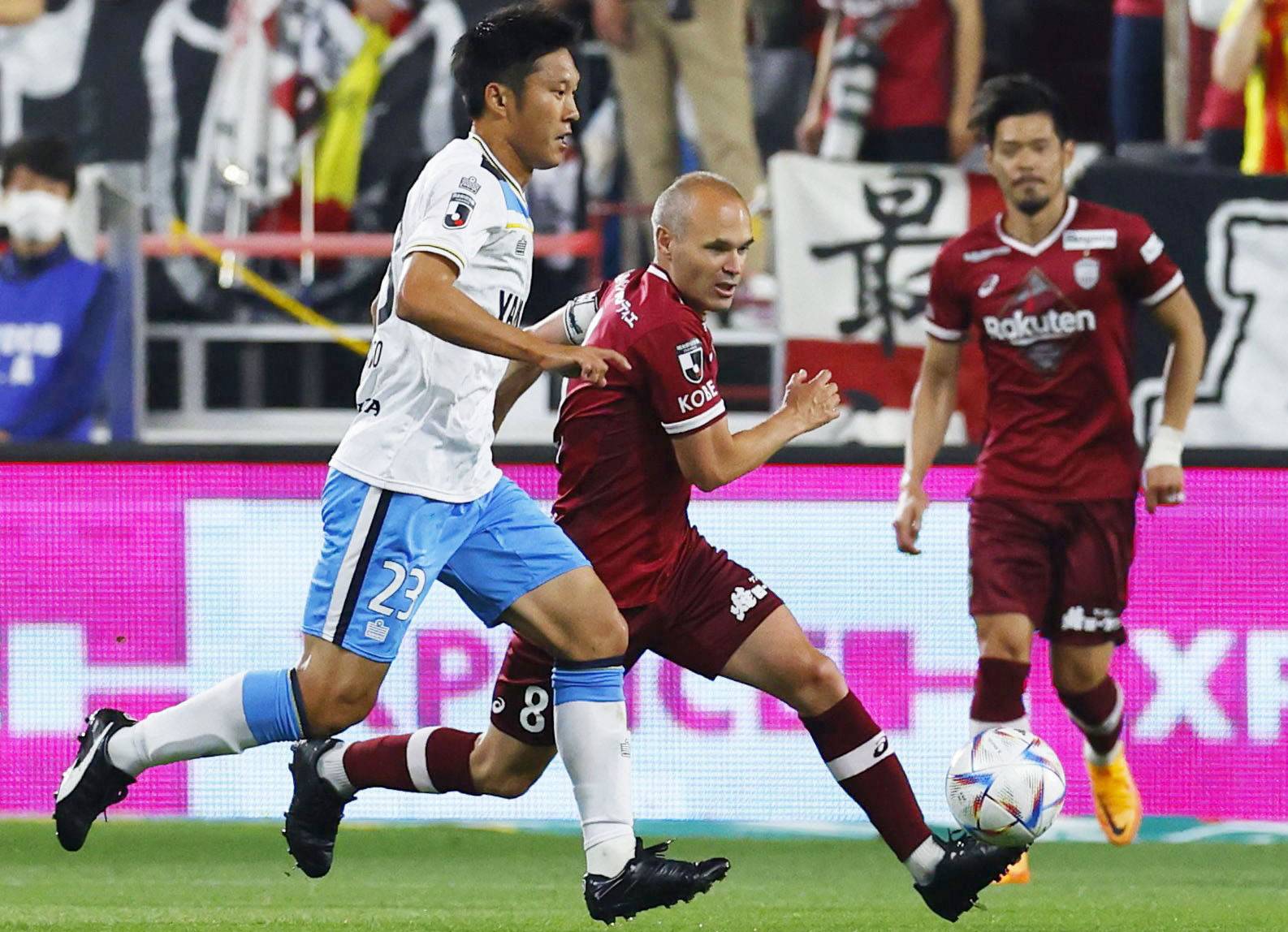 He scored the biggest goal in Spain national team’s history. His winning tally in the 2010 World Cup final in the 118th minute was the difference in a 1-0 triumph over the Netherlands in Johannesburg.

Twelve years ago, Andres Iniesta was in his prime as an athlete, celebrating the signature moment of his career.

Twelve years is a lifetime in sports. But now, in the twilight of his career, the Vissel Kobe midfielder remains as hungry as ever to win.

In an “At a Glance” interview posted on the NHK World website on June 13, Iniesta discussed his passion for winning and his desire to help develop the next generation of players.

“Of course I want to win as many titles as possible and achieve big results,” the 38-year-old midfielder said. “But I want to leave something more than that.”

Iniesta’s Methodology, a youth soccer academy, was established in Spain in 2013, with annual summer camps showcasing the skills of youth footballers from all over the world. After Iniesta’s much-publicized arrival in the summer 2018 to play in the J.League following 16 years at Barcelona, preparations began for the academy to establish roots in Japan.

It was an opportunity for the iconic Spaniard to exhibit the objectives of Iniesta’s Methodology.

Before the day was through, Iniesta explained his long-term aspirations for his involvement with Japanese youth soccer.

“Of course I want to share my style of soccer, but more importantly I want to convey to them the drive that’s necessary to fight for your dreams,” Iniesta told Rakuten Today, the official blog of Rakuten Group, Inc. “As for game mechanics, I want them to learn how to hold the ball, what to do when they have the ball, what they should do when they don’t — everything young players should be learning in order to build a solid foundation.”

Countless prominent athletes around the world have invested time and money to establish and run schools, camps and clinics for decades. Others have received backing from big corporations to make things happen. Rakuten, which owns Vissel Kobe, operates Iniesta’s Methodology academy in Japan.

In 2018, the nine-time FIFA FIFPro World 11 selection (2009-17) expounded on his mission for Iniesta’s Methodology in Japan.

“It’s not about just wanting to become a soccer player, it’s about thinking about what you need to do in order to become a soccer player,” he said, recounting his message to the aforementioned youngsters, according to Rakuten Today. “That’s what young players should be focusing their training on, and I want everyone here today to remember that. If Japan masters this fundamental concept, the country will be able to compete at a very high level on the world stage.”

Can Vissel climb into a respectable position on the J.League table over the next several weeks?

New manager Miguel Angel Lotina, who replaced interim boss Lluis Planaguma in April, guided Vissel to back-to-back wins ― 4-1 over Consadole Sapporo on May 29 in a J1 match and 3-2 over J3 side Kataller Toyama in an Emperor’s Cup second-round match on June 1 ― before the international break began in early June.

Before Planaguma briefly took over, manager Atushiro Miura lost his job after a seven-match winless streak (which eventually reached 11 games) to open the season.

Iniesta and his teammates are still in the thick of things in the AFC (Asian Football Confederation) Champions League, advancing from Group J to the round of 16. Up next: a clash with Yokohama F. Marinos on August 18.

After a third-place finish in the J.League in 2021, Vissel qualified again for Asia’s Champions League as one of league’s top-four finishers.

Though a variety of injuries have kept him out of the Vissel lineup off and on for a significant chunk of time since 2018, team captain Iniesta’s on-field impact can still be seen when he’s out there.

For example, his one-goal, one-assist performance in the Kansai club’s first J.League win of 2022, in a 4-0 thrashing of Sagan Tosu on May 14. His goal gave Vissel the lead in the second minute.

Or his match-opening goal in the sixth minute against AFC Champions League foe Melbourne Victory on March 15, helping Vissel secure a 4-3 win.

Those two matches illustrated Iniesta’s role as a tone-setting force for Vissel.

Upon signing a new two-year contract with the club in May 2021, Iniesta told reporters, according to Kyodo News: "I'm still very motivated to continue this project. I had a strong feeling when I came here three years ago, and I still have that same feeling now.

"There have been some tough times over the past three years ... but I realize we've made history with a first title and ACL appearance.”

Tough times have defined Vissel’s 2022 season, but new manager Lotina’s club has nowhere to go but up in the standings.

It will be interesting to see how Iniesta and his teammates perform as the season progresses, and how much influence the playmaking maestro will have on their season.

In October 2021, Vissel teammate Leo Osaki told Stats Perform, a sports data and analytics company, that Iniesta is the glue that holds the team together.

“Playing-wise, he demands a lot from everybody, not just players next to him but behind him, goalkeeper and strikers,” Osaki said. “In our bad times, he tries to talk to players and motivate them so the team doesn't fall apart.”

Andres Iniesta has helped raise Vissel Kobe's profile on a global scale. Pushing himself and his teammates to strive for excellence is one big reason he's such an important part of the franchise.