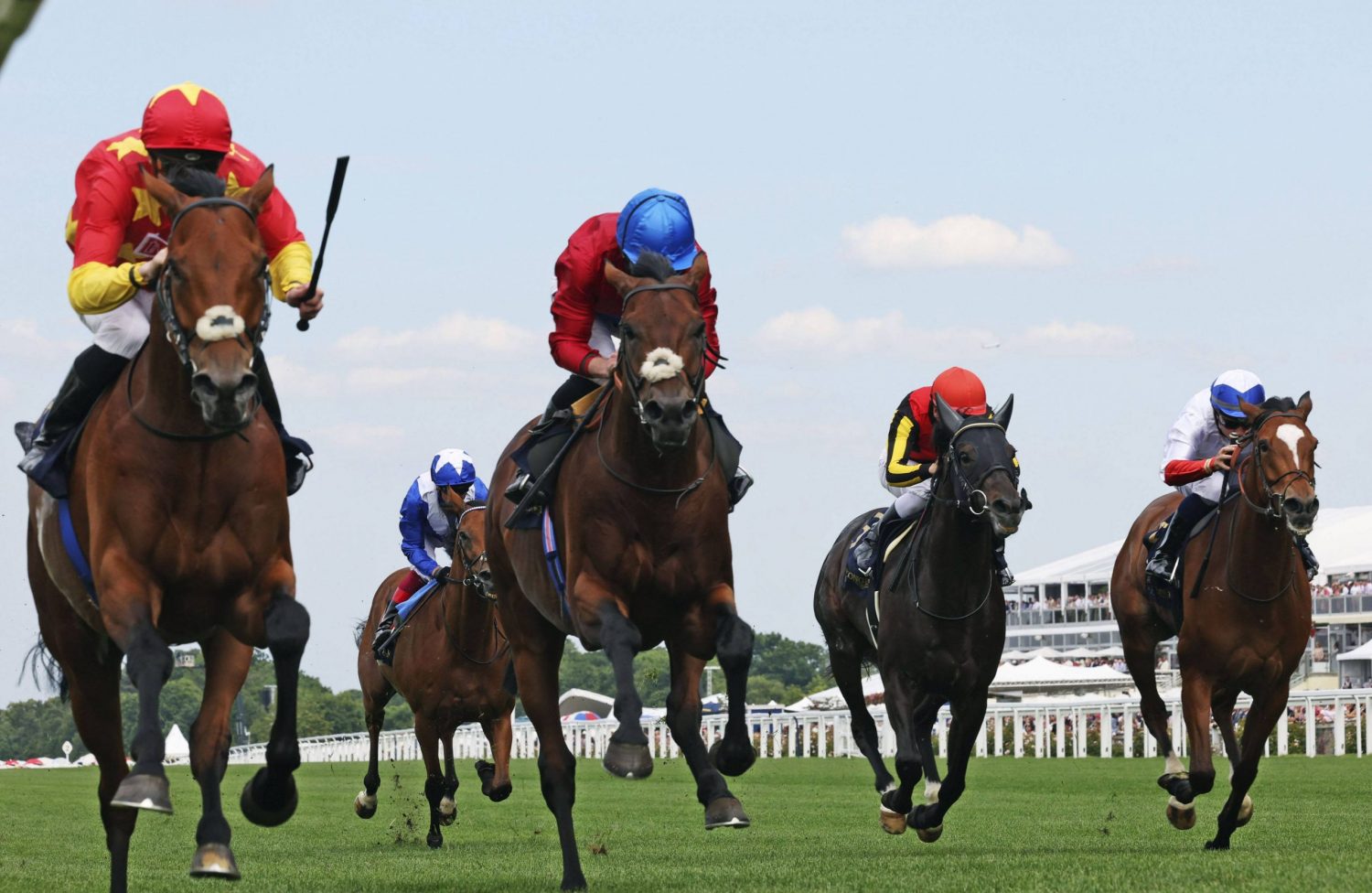 Shahryar (second from right), ridden by Cristian Demuro, races in the Prince of Wales's Stakes at Ascot Racecourse in Ascot, England, on June 15. (KYODO)

Most top-tier races around the world feature crowded fields of thoroughbreds, such as the Kentucky Derby and Japan Cup. Other premier races feature a much smaller number of entrants, giving each horse much more room to operate ― and a different viewing experience for spectators and TV viewers.

Take the Prince of Wales’s Stakes, for instance. The showpiece race, the third of seven on the docket at Ascot Racecourse in England, on Wednesday afternoon, June 15, had a field of five horses on Day 2 of the Royal Ascot equestrian meet, a showcase of glitz and glamour for five days. The race was first held in 1862; suspended after World War II, it returned in 1968.

Lord North (Frankie Dettori) rounded out the field in fifth place. Winner of the 2020 Prince of Wales’s Stakes, Lord North was the lone 6-year-old in the field. The other four entrants are 4-year-olds.

In the early going, State of Rest was the pace-setter, followed by second favorite Shahryar on Ascot’s turf.

At the midway point, there was no change at the front of the pack.

State of Rest maintained the lead throughout the race, with Bay Bridge pulling ahead of Shahryar and Grand Glory to produce a spirited effort down the back stretch.

Joseph O’Brien, State of Rest’s trainer, won the 2012 Prince of Wales’s Stakes aboard So You Think. Collecting his first win in the race as a trainer was an exhilarating experience.

“It was a brilliant ride on a tough horse,” O’Brien said, according to the BBC. “It’s very special to get a winner here.

Speaking to Sky Sports Racing, Crosse said: “It’s surreal. It was amazing, the perfect run around. What a horse and a super training performance from Joseph. I’m just so grateful to be able to ride him on a day like today.”

Shahryar gave a formidable challenge, but came up short.

The Japanese horse is obviously very good, but our lad thankfully was on top,” Crosse added. “He’s a jockey’s dream.”

Demuro noted that Shahryar ran out of steam at the end of the race.

“When I asked to go, he didn’t have the same acceleration as last time,” Demuro was quoted as saying by Agence France-Presse.

With Demuro handling the reins, Shahryar’s victory in the Dubai Sheema Classic in the United Arab Emirates on March 26 was the colt’s first overseas triumph. It raised expectations for the colt.

In the run-up to the Royal Ascot meet, Hiroyasu Matsumoto, manager of Northern Farm in Hokkaido where Shahryar was bred, discussed the significance of the £1 million GBP (about ¥161.24 million JPY) Prince of the Wales’s Stakes to him and the high-profile horse’s racing team.

“We really want to win at Royal Ascot with a Japanese horse,” Matsumoto was quoted as saying by Paulick Report, which covers the horse-racing industry. “It’s always been a dream and it’s a great honor to be running here.”