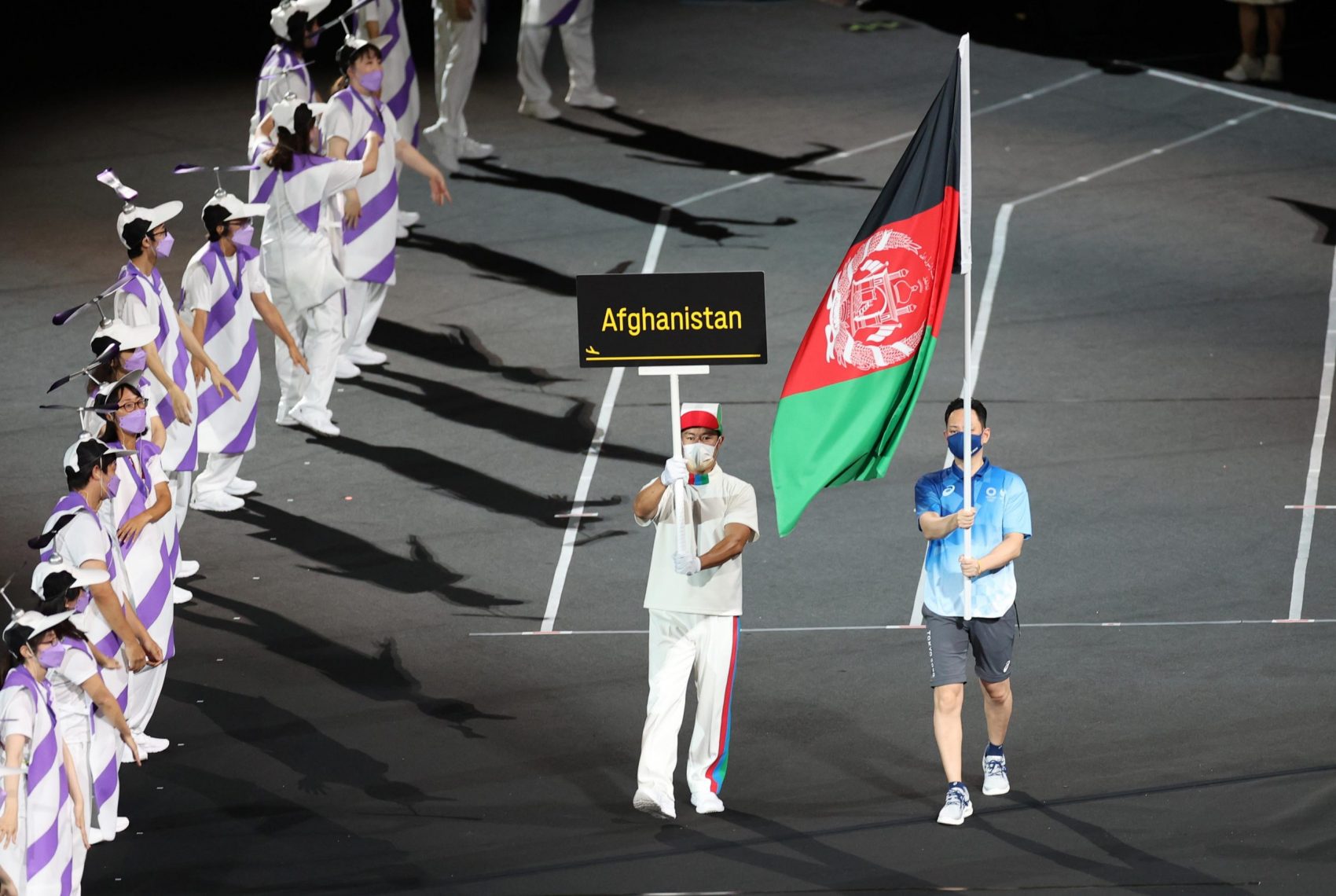 A volunteer carries the Afghanistan flag at the Opening Ceremony of the Tokyo Paralympics on August 24 at the New National Stadium.

In an unexpected bit of good news, Afghanistan’s Zakia Khudadadi and Hossain Rasouli will compete at the Tokyo Paralympics, it was announced late Saturday night, August 28.

That didn’t seem possible in the run-up to the Opening Ceremony, which was held on August 24 at Tokyo’s New National Stadium.

But the two athletes quietly departed their war-torn homeland in the days before a major terror attack at the airport in Afghanistan’s capital. Khudadadi, a taekwondo participant, and Rasouli, an athletics sprinter, were in Paris for one week before flying from Charles de Gaulle Airport to Haneda Airport, an 11-hour journey, on the day of the announcement.

While in France, the two Paralympians stayed at the National Institute of Sport Expertise and Performance (also known as INSEP), and International Paralympic Committee President Andrew Parsons provided a compelling update.

“Twelve days ago we were informed that the Afghan Paralympic Team could not travel to Tokyo, a move that broke the hearts of all involved in the Paralympic Movement and left both athletes devastated,” Parsons said. “That announcement kickstarted a major global operation that led to their safe evacuation from Afghanistan, their recuperation by  France, and now their safe arrival in Tokyo.

“We always knew there was a remote chance both athletes could participate at Tokyo 2020  which is why the Afghan flag was paraded at Tuesday’s Opening Ceremony. Like all the athletes here at Tokyo 2020, we never gave up hope and to now have Zakia and Hossain in the Paralympic Village alongside 4,403 other Paralympians shows the remarkable power of sport to bring people together in peace.

“Our number one priority has and always will be the health and well-being of both athletes. Over the last 12 days, Zakia and Hossain have continued to express their absolute desire to come and compete at the Tokyo 2020 Paralympic Games.”

The 22-year-old Khudadadi is scheduled to participate in the women’s K44 under-49 kg weight category in taekwondo on Thursday, September 2.

Her compatriot Rasouli, who is 26 and also a first-time Paralympian, originally planned to represent his homeland in the men’s T47 100-meter event on August 28. But due to the timing of his arrival in Japan, Rasouli, who lost his left arm due to a mine blast, is now set to take part in the T47 long-jump competition on Tuesday, August 31.

Arian Sadiqi, serving as the chef de mission of the Afghanistan Paralympic Committe’s delegation, issued an upbeat statement about the positive role of sports in a world full of geopolitical conflicts and endless wars.

“I strongly believe that, through the Paralympic Movement and the Paralympic Games, we all can deliver the positive message that peaceful co-existence is best for humanity,” Sadiqi said, “that we should celebrate our differences knowing that we have more in common than that which divides us, and that we should keep and cherish peace because quarrels and negative feelings only destroy  humankind.”

Nobody is predicting that Khudadadi and Rasouli will win gold medals, but their upcoming participation in the Paralympics represents a major victory in and of itself.

And you can’t help but share in the delight of the various authorities within the IPC and groups that supported the two Paralympians in traveling safely to Japan. After all, it’s the polar opposite of the bloodshed and suicide bomb attacks, oppression and chaos, anarchy and heartache since the Taliban takeover a few weeks ago.

Reflecting on the two Afghan Paralympians’ story, Chelsey Gotell, the chairperson of the IPC Athletes’ Council, delivered heartfelt remarks on behalf of the council. It reminded everyone that Khudadadi and Rasouli have earnestly maintained their desire to compete and this mission will make it happen.

“Since leaving Afghanistan last week they have received excellent care from the French authorities and the team at INSEP,” Gotell said. “Throughout and going forward the most important thing is Zakia and Hossain’s physical and mental wellbeing. We have been reassured that they arrived in Tokyo ready to do what they have trained years for.

“They will have the full support of the Paralympic family while with us. We know Zakia and Hossain will want to [make] themselves and their families proud. The stage is theirs to show the  world the power of sport.”

After the trauma they’ve faced escaping their homeland, it’s understandable that Khudadi and Rasouli won’t be available for interviews during the Paralympic Games.

IOC spokesman Craig Spence said, “Human life is the most important thing here. I think their performances will do the talking on the field of play.”

He continued: “The last thing they want at the moment is to be asked multiple questions about either what’s gone on or the future.”

Yes, the world already knows their story. But we’ll learn even more about them in the upcoming days during competitions.

Nearly everybody (minus the Taliban) will be rooting for them.