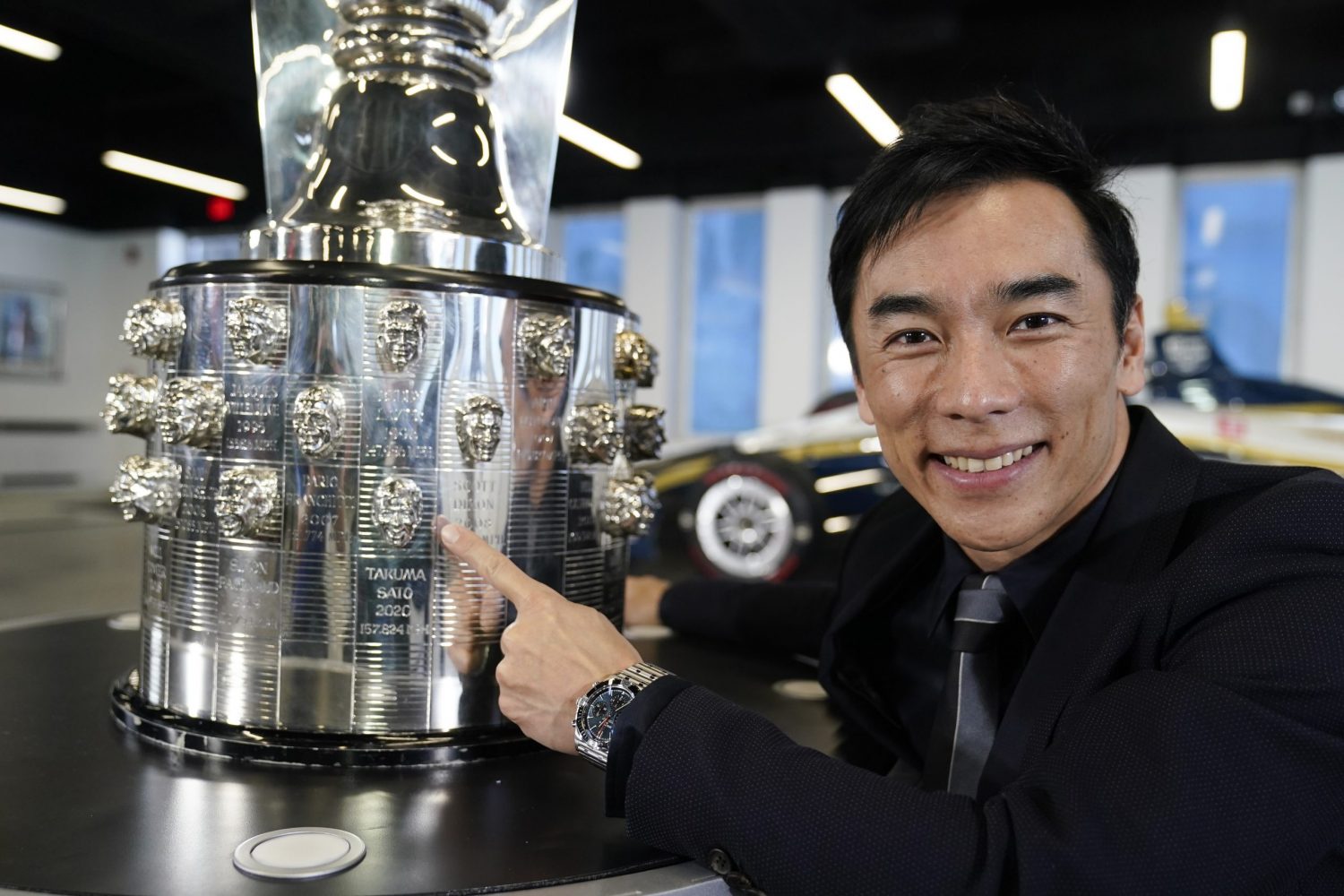 Takuma Sato poses with the Borg-Warner Trophy at an unveiling at Indianapolis Motor Speedway on February 19. (Darron Cummings/AP)

Takuma Sato will be vying for his third Indianapolis 500 title on May 30, and the Tokyo native could become only the sixth driver to win it in back-to-back years.

After winning his first Indy 500 title in 2017, Sato slipped to 32nd place the next year, but rebounded in 2019 with a third-place finish. And then he captured his second Indy 500 title last summer in the pandemic-delayed race, which was held without spectators.

There have already been five races in the current IndyCar Series season, with the Grand Prix of Indianapolis, also known as the GNR Grand Prix, being the most recent on Saturday, May 15 at the Indianapolis Motor Speedway. Sato finished 16th out of 25 participants.

In the run-up to the Indy 500, defending champion Sato is, of course, a focal point of media coverage and fan attention. And, for him, a return to a level of normalcy at this year’s race is a big deal.

“First of all, very exciting to come back to IMS, particularly [because] we have fans this year,” Sato said during a news conference on May 11. “As we kept saying, it’s a great thing [the] Indiana government, IMS and everybody is working together to make it happen.”

“The Indy 500 is the Indy 500 because of the fans, truthfully,” Rahal commented at the same news conference. “Yes, it’s tradition. Yes, it’s the greatest race in the world, certainly in all of our opinion. The fans are what make it that. It’s great to be able to see 140,000 of our best friends out there in a couple weeks’ time.”

Doug Boles, president of Indianapolis Motor Speedway, has said there will be some sort of planned recognition for Sato’s 2020 victory on May 30, giving him the special spotlight in front of the fans.

Asked about having a chance to celebrate with fans nine months after last year’s race was held, Sato didn’t hesitate to mention that he’ll “really appreciate” it.

“I’m just looking forward to sharing a great, happy moment with the fans physically there,” Sato said during the wide-ranging interview. “That’s the most important thing, just to get the atmosphere back in IMS. Whether it’s before the race or doing {some] event, I don’t know.”

And even though the speedway won’t be filled to capacity due to COVID-19 era rules, Sato believes there’ll be a wonderful atmosphere for the biggest race on the IndyCar calendar. He explained his outlook by saying, “I think the people’s energy will cover like 300,000 people. I believe that’s what’s happening.”

Kudos to Sato for also wanting to share the spotlight with the entire Rahal Letterman Lanigan Racing team, including the pit crew.

“It will be good to give the team credit, especially for the 30 boys to have a great hand clapping with the fans,” Sato opined. “I think it will be good for the boys, definitely.”

After winning his first Indy 500, Takuma Sato’s fame soared on both sides of the Pacific Ocean. For example, he was invited to throw out the ceremonial first pitch before a Los Angeles Angels game on April 3, 2018. A guy named Shohei Ohtani slugged his first major-league home run, a three-run blast, in the first inning.

“That was great to see him,” Sato said.

From a broader vantage point, Sato also feels a strong bond with Japanese athletes who have enjoyed success on the global stage. In addition to keeping tabs on Ohtani, who belted his MLB-leading 13th home run on Tuesday, May 18, he is close friends with tennis player Kei Nishikori. He said he hopes to meet Masters champion Hideki Matsuyama in the future.

Sato also wants to learn about up-and-coming athletes and follow their careers.

“Yeah, looking forward to the next generation that always comes up,” he says. “It’s a great motivation for all of us.”

When Sato triumphed in the Indy 500 for the second time on August 23, 2020, it didn’t mean that he would be as recognizable as actor Tom Cruise or singer Shakira in every square mile of Japan. But he certainly noticed that he’s a bigger celebrity than he was even a year ago.

Spending the IndyCar offseason in Japan gave him plenty of time to observe how people react to seeing him.

“Let’s put it this way: If you go to the racing venue, for example at Suzuka [Circuit in Mie Prefecture], obviously there is no way I can walk outside. It’s impossible,” he told reporters. “That’s only happening in the racing context.

“I can go to [a] restaurant, I can go to [a] convenience store, [a] gas station by myself. Daily stuff I can, no problem. Yes, some people recognize me, cheering me.”

He said it’s not comparable to what a movie star deals with every day, e.g. no privacy.

Does Sato appreciate the public’s affection?

“It’s always good. It’s always positive energy [from] the fans,” he pointed out.

What’s more, the Indy 500 “has been recognized in Japan more and more, particularly since 2017, it’s even more [well-known]. Then last year made a huge impact, too.”

In other words, Sato has played a pivotal role in making more people aware of the Indy 500 in his homeland.

And he’s grateful for the fans’ steadfast encouragement.

“I have great support from the loyal fans in Japan,” Sato mentioned.


Working as a Team

You can’t overstate how important the synergy between a driver and a racing team is.

Each member of the racing team has a specialized job, including the vital behind-the-scenes work of a race engineer, and developing a good rapport with new team members takes time.

Just ask Sato, who expressed optimism about the progress his racing team has made over the course of the first several weeks of the season.

“The important thing is, as Graham said, we have very strong engineering. “The boys [are] doing a great job now,” he pointed out during the aforementioned news conference in Indianapolis. “I have a new engineer, Matt Greasley over Eddie Jones from last year, which takes some time to understand each other together, but the relationship is really good. He understands me. I understand him.

“[It’s] just [a] matter of we’re talking about thousandths of seconds in this competitive world. Everything [needs to be done] perfectly. It’s coming better for that.”

Sato has a long history as a competitor in elite-level auto racing. Before making his IndyCar debut in 2010, he was a Formula One pilot from 2002-08.

He turned 44 in January. He’s focused on maintaining good physical fitness, something he considers one of the keys to success on the racetrack.

“All the drivers in the paddock, you can see they’re fit, athletic,” Sato told reporters. It’s “different than a century ago. Today everyone has to train really hard. I am the same case, too.”

He continued: “The most important thing is I feel mentally, physically the best is coming yet. I feel like every time I  jump in the car I learn something. Physically, yes, there is some certain part, like let’s say the flexibility or healing speed is not as good as at 20, for example. But that’s fine. You can work out together. I feel very motivated for that.

“Hopefully I don’t lose any speed for the coming months and years. Hopefully I can keep the competitiveness. If I don’t feel any good of that in myself, then that’s the time reaching for something else. For now I don’t feel anything about that.”

Clearly, Sato loves his job and the excitement it provides for the fans.