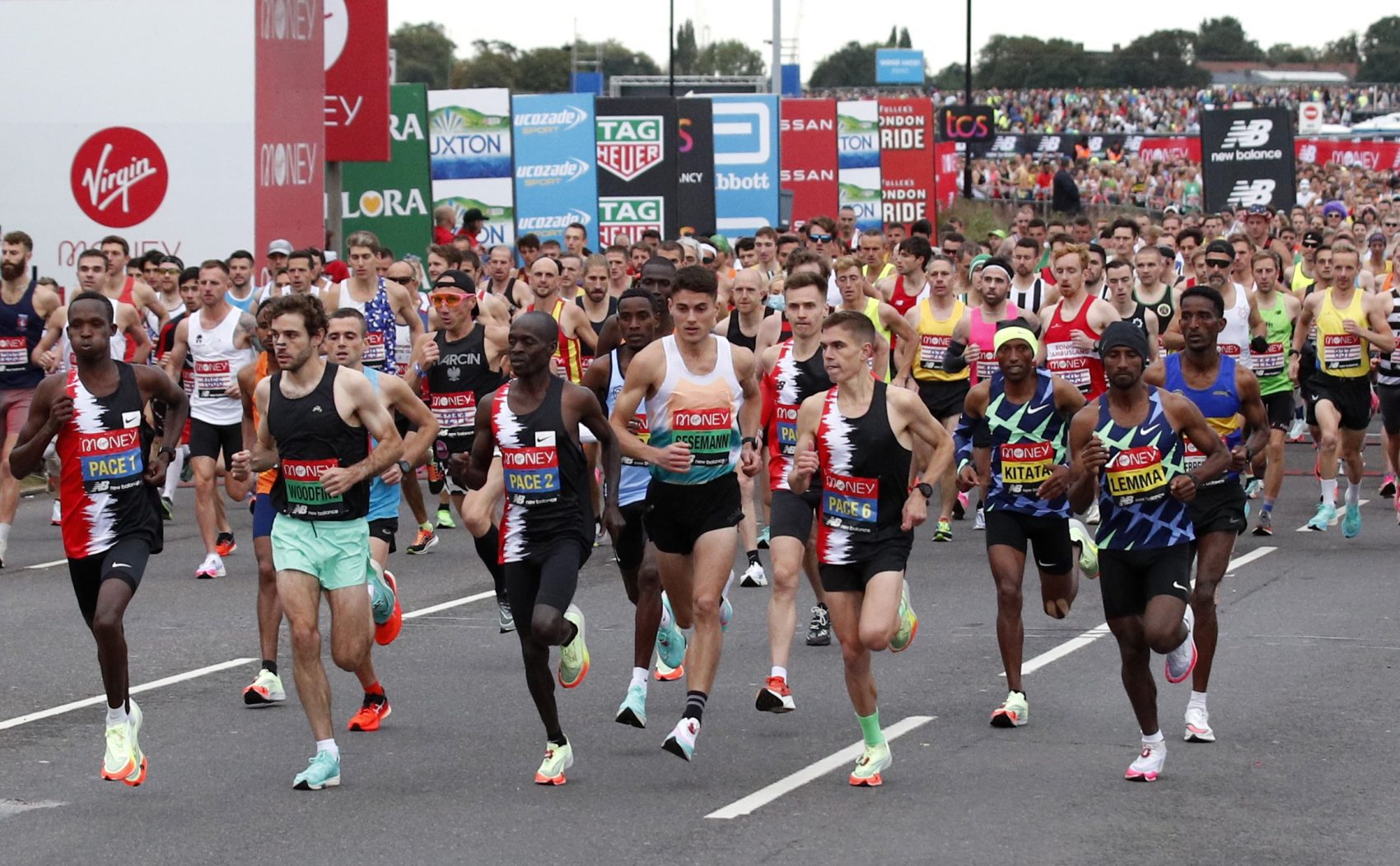 Streets are crowded along marathon routes, such as during the London Marathon on October 3. (Andrew Boyers/ACTION IMAGES/via REUTERS)

Some news stories ought to be filed under the “things that make you go hmmm” category. Like this one about the Kanazawa Marathon on Sunday, October 31 from Japan Running News:

“Due to be held the same day as voting in the upcoming election for the House of Representatives, runners at the Kanazawa Marathon can expect to be stopped at over 20 intersections on the course in order to allow voters on their way to the polls to pass without interference.”

Japan Running News, an informative source about this nation’s running scene, cited a recent news report from NHK for its October 14 article. It immediately grabbed my attention.

The headline, “Kanazawa Marathon to Stop Runners at 21 Locations Due to Election,” accomplished that.

After all, marathon runners are trained to go, go, go ー not stop for traffic.

But the influx of people (an estimated 50,000) coming and going from polling sites in the Ishikawa Prefecture city on Sunday is something that city officials and law enforcement can’t ignore.

“On race day, road closures for the marathon will be in place for up to 6 hours, but the locations of 14 polling stations on the course mean that voters will need to be able to cross through intersections,” Japan Running News reported.

Asking marathon runners to be prepared to stand still and wait while potential throngs of voters proceed through one of the 21 intersections cited above during the race’s scheduled hours (8:35 a.m. to 3:40 p.m.) is unreasonable.

There’s nothing normal about these race-related conditions.

Which begs the following questions: Could event organizers have decided to hold the race a day earlier? Or a week later? Could the city’s security personnel have been persuaded that another day would be a more manageable traffic control task?

Taking into account the complexities of both events on Halloween, scheduling flexibility for the marathon seems to have been lost.

Sure, the winds of political change necessitated by new Japanese Prime Minister Fumio Kishida’s election earlier this month made October 31 an important day on the national calendar ー and yes, the Kanazawa Marathon, which was first held in 2015, had already been scheduled. (And many runners had already made hotel reservations.)

And yes, it’s understandable that event organizers want to proceed as planned after last year’s race was canceled due to the COVID-19 pandemic.

But asking the expected field of 10,000 runners to stop running because the streets might be too busy for safe passage during daylight hours creates conditions that are the opposite of ideal. These are conditions that should be avoided.

Instead, who knows how many delays may occur, even if voters follow requests to vote early or visit polling stations that are not located along the marathon route.

The natural rhythm of running a race and the collective competitive spirit of the runners may be compromised because of the need for voters to arrive at polling stations and leave them.

Indeed, there are always marathon runners who lace up their sneakers on race days with the intended goal of shattering personal, national, event or world records. Will that be possible in this race due to the possibility of disruptions at intersections?

This year’s Kanazawa Marathon will be held with a unique asterisk hovering above it, a special request from the city’s mayor.

“We would like to give runners who are planning to chase time goals advance notice and ask for their understanding,” Kanazawa Mayor Yukiyoshi Yamano said at an October 13 press conference, according to Japan Running News.

Understanding is a universal concept.

Halting hundreds or thousands of runners at intersections during a 42.1.95-km race isn’t.

Hopefully, the actual race will resemble normal marathon conditions from start to finish.

On paper, that doesn’t seem possible, though.