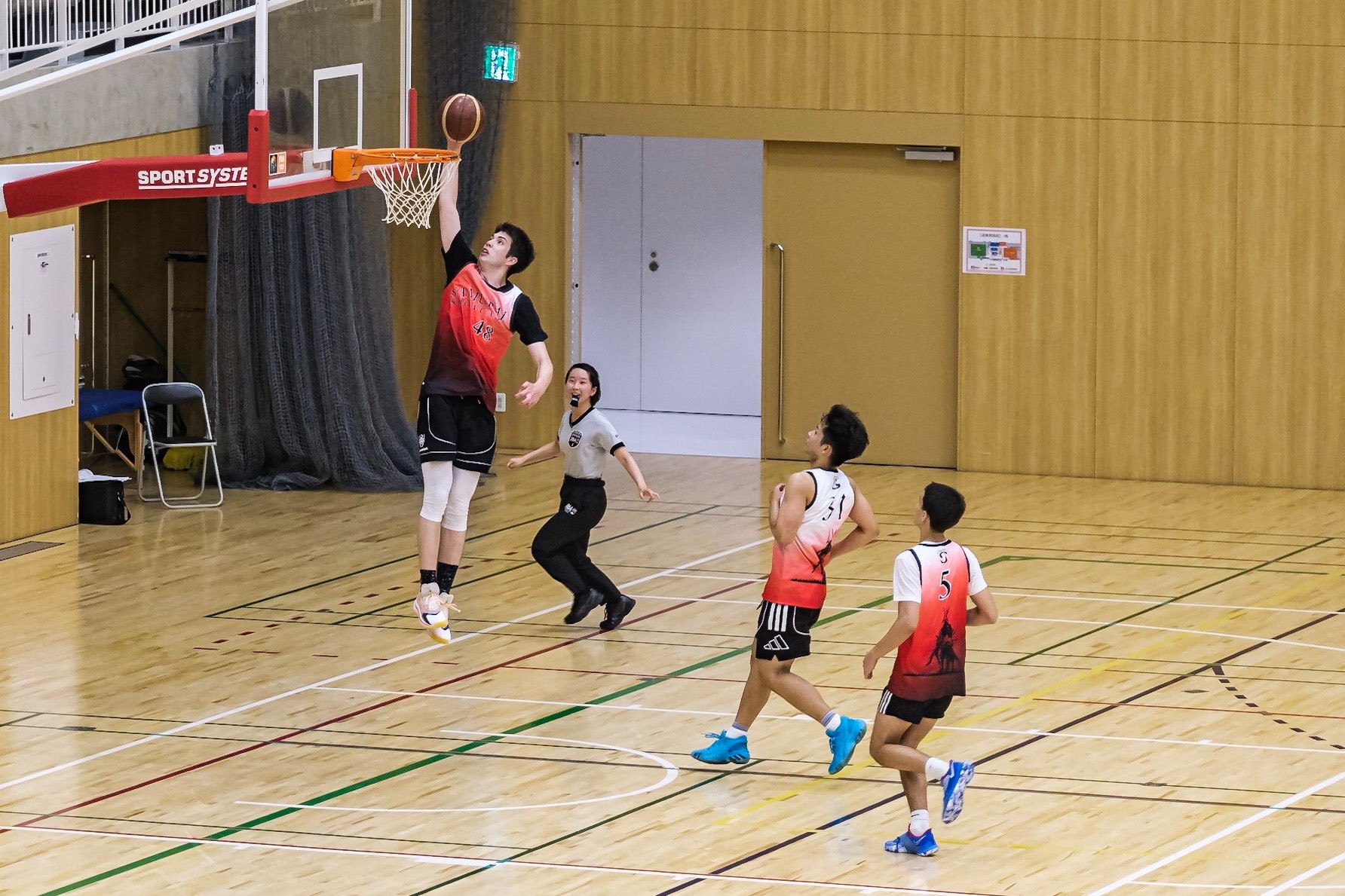 Taiyo Murayama shoots a layup at the Tokyo Top 30 Showcase on June 11 in Kawasaki. (Rohan Gillett)

The Tokyo Samurai AAU youth basketball organization provides opportunities for players to develop their skills and participate in events that give them exposure, both in Japan and overseas.

It’s a year-round mission for Tokyo Samurai director and head coach Kris Thiesen and his staff.

Clearly, they love basketball and teaching the game.

The Tokyo Samurai website highlights their mission. “…The Tokyo Samurai AAU youth basketball organization mixes international and Japanese players based in Tokyo to expand the game of basketball in Japan,” the website states. “We develop fundamentally sound young players of good character and aid them in gaining exposure both at home and abroad.​”

The Tokyo Top 30 Showcase event on June 11 in Kawasaki perfectly illustrates the value of an organization like Tokyo Samurai, because it entices talent evaluators to watch a lot of players in one place at the same time and facilitates future opportunities as well.

High school, college and pro coaches, as well as administrators with decision-making roles, recognize the importance of hoop showcases and invest their time in seeing how players perform in the spotlight.

Several days after the Tokyo Top 30 Showcase at Kawasaki Culttz Main Arena, Thiesen filled me in on his overall impressions of the event. It was an insightful exchange, and he gave detailed responses to all of my questions.

“The purpose of the event was twofold,” he explained. “At the high-school level, we want to be able to send film to college coaches showing these players playing against older, more experienced players. This can give coaches a better indication how a player might handle college basketball in the U.S. as opposed to just showing them film against other high-school players in Japan.”

This event was held for the first time last year, and Thiesen gave a quick rundown of how and why Tokyo Samurai invested its time into the project.

“We ran it last summer in July, mostly because it started out as a chance for our high-school kids to send film to college coaches playing against high-level talent,” Thiesen said. “A couple coaches came out and they encouraged us to run it again. June/July is ideal because pro teams are looking for players, our high school kids are prepping to go to the U.S. to play in tournaments and a number of college kids are back for the summer. “

In addition to his busy workload with Tokyo Samurai, which fields Under-15, U-16 and U-17 teams and a youth basketball academy, Thiesen serves as the head varsity coach at St. Mary’s International School in Tokyo’s Setagaya Ward.

This keeps him well-connected to grassroots basketball and a growing pipeline of players and coaches.

And, it’s safe to suggest, Thiesen didn’t need to beg players to participate in the Tokyo Top 30 Showcase.

Competition is a powerful motivational force, and players with aspirations to take their game to the next level understand how important days like June 11 can be.

Forty-eight players took part in the big day’s activities, and players were grouped into five teams. All players showed up at the gym with a guarantee of appearing in three games that day. The event organizers also made sure that the top players would be recognized for their performances, with All-Star picks made at the conclusion of the day.

Who were the four dozen players?

“The age range was between 15-24 years old, but the average was 19.5,” Thiesen reported. “We had a mix of high school, college and recent graduates or professionals involved in the event.”

He continued: “For our college-aged players, many are hoping to land a professional contract or make a strong impression to have the team further pursue them. B. League teams often want to find up-and-coming talent they can scout for the future or they can develop now and this gives them a chance to see them live. A number of our players are either abroad for college or if they are in high school, not in the Japanese high-school circuit, so they are relatively off the radar. There is some hidden talent that many don’t know about and this gives teams a chance to see them.”

Playing for Tokyo Samurai helped raise Stockman’s profile. He completed his first season with the B. League’s Yokohama B-Corsairs this spring.

“He came in a virtual unknown, started as a practice player and was signed to a contract by December, playing 10 minutes a game,” Thiesen noted.

By season’s end, Stockman had appeared in 41 of the B-Corsairs’ 59 games.

Indeed, Stockman’s story gives a glimpse into how June 11 may factor into other players’ future plans.

And it’s got to be an encouraging sign that B. League personnel and Japan Basketball Association staff also stopped by the Kawasaki gym to watch. (Even though the B. League holds its own tryouts, players can always slip through the cracks, or show up one event, but skip another.)

“There was representation from all three levels of the B. League, as well as the JBA youth staff was in attendance,” Thiesen told ODDS and EVENS. “In total I think we had 12 teams in attendance, but I know others had gotten a hold of the film we put out of the event.”

In other words, even if B. League teams weren’t there, promising players’ skill sets can still pique teams’ interest, leading to potential tryouts or jobs in the future.

Did some of the 48 players solidify their chances of landing pro contracts, gaining colleges’ interests and/or opening eyes that they should be looked at more closely?

“Absolutely!” Thiesen declared. “I’ve had a couple B. League teams talk to me on the day or since and ask about players to get more background. U.S. college teams as well have reached out once we started putting out some film.”

The convenience and ubiquitous availability of video footage nowadays makes it much easier for coaches anywhere to evaluate players. Like readers of this column, they can access game footage and practice drills of players and teams online.  (For example, check out player highlights on YouTube for Kyoya Sasaki and Keshawn McNeil, two of the Tokyo Top 30 Showcase participants.)

An Opportunity to Shine

“There were a number of talented players involved that helped raise their future stock,” Thiesen stated.

“Keigo Kimura who was a product of Hachioji High School [Tokyo], then St. Thomas More School [in Connecticut] and most recently at the University of Saint Joseph, where Hall of Fame coach Jim Calhoun is at, had a solid start early and was impressive with his 3-point shooting.

“Shintaro Ehara from Tokai University [Kanagawa] who only played two games because of his school commitments, showed his versatility as an inside scorer, 3-point [shooting] touch and really showed his ability as a passer.

“Taku Youngblood, who is also at St. Thomas More Academy, has athleticism not often seen in Japan and has good touch finishing at the rim or can just throw it down with ease.”

Who are a few other standouts who caught Thiesen’s eye at the showcase?

“Damilola Mosaku, another St. Thomas More product and will be going to Stonehill [College, an NCAA Division II school in Massachusetts] had some buzz because of his size (193 cm), his smooth lefty stroke and his ability to handle the ball on the perimeter,” Thiesen observed.

“Kaine Roberts who is going to Stony Brook [Division I] also possesses that explosiveness that’s hard to match, but he likely won’t be coming back to play for a few years.”

Roberts, a Tokyo Samurai alum, spent this past season with the B2’s Earthfriends Tokyo Z, but has maintained his amateur status because he hasn’t received a salary (he’s eligible to play NCAA college basketball). He appeared in 56 games and made 12 starts for the B. League team in preparation for his upcoming first season at the New York university.

Keeping tabs on dozens of players on a single day is a skill that Thiesen has developed. It certainly helps him do his job more efficiently, including when being bombarded with a long list of questions from a sportswriter.

So who else generated a buzz on June 11? I asked.

“An interesting one was Yusuke Fujimura, who has a big YouTube following for his 3×3 and streetball,” Thiesen pointed out. “He had some really good moments and proved hard to stop one-on-one. He has a desire to go to the pro game and it’ll be interesting to see if teams give him a shot. Two others that were asked about a bit were Tariki Dickson, who recently graduated from Nittaidai University [Nippon Sports Science University], and Taiyo Maruyama, who was at Meisei High School who had stopped playing and is now with the Shibuya Futures 3×3.”

Thiesen continued: “Of the high school kids who I have already heard from U.S. coaches wanting to know more were Keshawn McNeill from Zama High School, who is a strong athletic point guard, and Kyoya Sasaki from Morioka High School who can bomb 3s from deep.”

Tokyo Samurai, established in 2014, is still a young organization, but for its players and coaches there are plenty of success stories to celebrate. Just last weekend, Samurai alum Avi Koki Schafer, who spent last season with the B. League’s SeaHorses Mikawa, had a solid performance in the Japan men’s national team’s win over Taiwan in a FIBA Asia Cup qualifier on June 18 in the Philippines, finishing with 11 points and 10 rebounds.