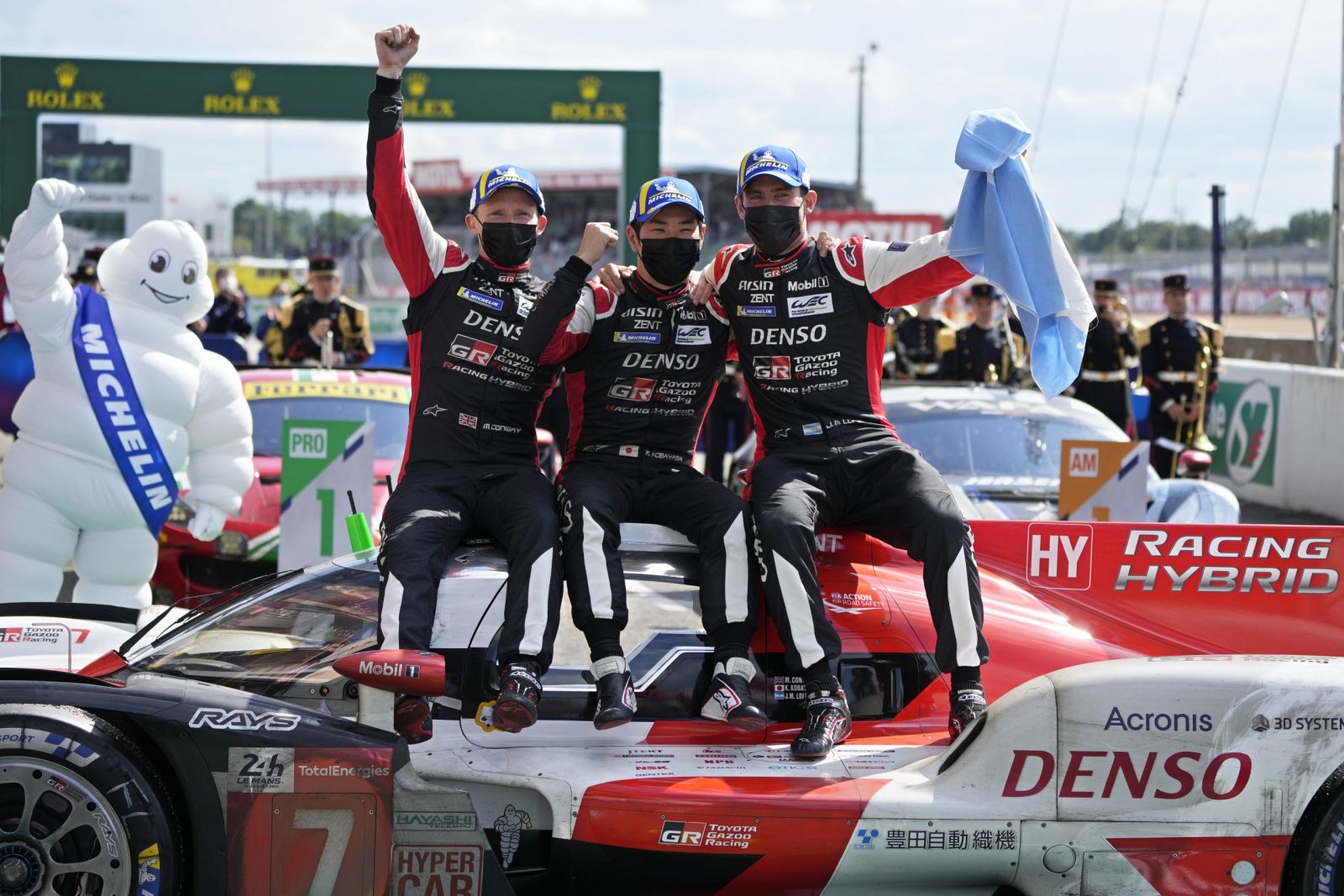 Toyota Gazoo Racing has enjoyed an envious run of success at the 24 Hours of Le Mans over the past few years, with one of its cars claiming the top prize four years running.

That honor, however, had eluded Toyota teammates Mike Conway, Kamui Kobayashi and Jose Maria Lopez, who drive the No. 7 car. That is, until Sunday, August 22 in the 89th running of Le Mans.

The triumphant trio earned pole position for last weekend’s race, handled every adversity that came their way and shared the thrill of victory after 371 laps, 3,107 miles (5,000 km) and 33 pit stops at the Circuit de la Sarthe.

Kobayashi impressed in qualifying with the fastest one-lap time of 3 minutes, 23.9 seconds.

Conway (a Briton), Kobayashi (who hails from Amagasaki, Hyogo Prefecture) and Lopez (an Argentine) represent racing excellence from the far corners of the globe.

But together, since 2018, they’ve come awfully close to winning France’s prestigious endurance race, placing second in 2018, third in 2019 and third last year.

“We went through so many experiences before we got there. At Le Mans, you always have to work and this time, too, we had problems during the race,” Kobayashi told Agence France-Presse after celebrating his victory with Conway and Lopez.

“It wasn’t easy, we tried to maximize what we could do to survive and we did it. It’s a bit unreal. Often, Le Mans brought us nothing but bad luck, but today we are winning. It’s awesome.”

While changing the narrative following their shared disappointment in 2018-20, Kobayashi and his teammates also halted the Le Mans victory streak of Toyota Gazoo Racing’s No. 8 car, which is now piloted by Sebastien Buemi, Kazuki Nakajima and Brendon Hartley, who replaced veteran star Fernando Alonso before the 2019-20 World Endurance Championship season.

This time, a crowd of 50,000, or 20% capacity, was on hand for the annual automotive spectacle. Fans were barred from attending a year ago due to the COVID-19 pandemic.

One racing crew left the Circuit de la Sarthe elated on Sunday, and Nakajima and his car mates had to settle for second place, two laps behind the No. 7 GR010 Hybrid Le Mans Hypercar.

Conway, 38, was No. 7’s driver when the 61-car race began at 3 p.m. on Saturday, August 21. Despite being slowed down by a flat tire, he built a 1-minute, 13-second advantage before Kobayashi replaced him behind the wheel.

For Kobayashi, a former Formula One driver for Toyota and Sauber, there were other difficulties to navigate throughout the race. As rain pelted the 8.47-mile course in the evening, the car slipped off the track on one occasion as Kobayashi dealt with the natural elements.

It was a small diversion. The eventual winners found their way back to the front, then showed their qualifying results were no fluke.

As the sun welcomed another day to France, Conway and company had extended their lead to roughly 3 minutes.

At the same time, the No. 8 Toyota, dealing with fuel trouble, lost some precious time on the track. But to their credit, Buemi, Nakajima and Hartley made up for lost time and pulled into second place for the race’s final stretch.

Meanwhile, for the race’s final hour, Conway stepped out of the hot seat. It was the 34-year-old Kobayashi’s turn again in the spotlight, not unlike a closer leaving the bullpen and taking over to finish a baseball game.

He maintained control and drove the No. 7 speedster across the finish line, with its sister team close behind (two laps separate first- and second-place finishers).

The victory delivered sweet atonement, according to Conway.

“We’ve come so close so many times and to get it done here with the new Hypercar as well [is special],” Conway was quoted as saying by The Guardian, a British newspaper. “I was crying like a little girl. We worked so hard for this one and you forget how hard it is.”

He elaborated on his emotional rollercoaster in an interview with Motor Sport Magazine.

“We came so far for so many years but, up to now, we couldn’t win Le Mans,” Lopez said.

“All those experiences make the victory even more special. Mike and Kamui are like brothers to me and I have seen them doing things in the car which are just amazing. Of course there is a strong team behind us in Japan and Cologne [Germany]. We take the glory but we couldn’t do this without this team.”

Up next: 6 Hours of Bahrain, which is scheduled for October 30, in the fifth of six tour stops on the World Endurance Championship calendar this year.

Conway, Kobayashi and Lopez lead the current season standings with 120 points, and their Toyota colleagues sit in second with 111 points. And look for a healthy rivalry to be on display over the final two races of the season at the Bahrain International Circuit.

After the October 30 event, the season finale ー the 8 Hours of Bahrain ー will also be held at the same venue on November 6.

The Fédération Internationale de l’Automobile, commonly known as the FIA, is the global governing body for numerous motor sports organizations, including the World Endurance Championship.

Taking into account various logistical challenges associated with travel restrictions and quarantine protocol during the pandemic, WEC officials decided to hold back-to-back races in Bahrain to wrap up the season.

Frédéric Lequien, chief executive officer of the FIA World Endurance Championship, spoke about the unique schedule to conclude the 2021 campaign back in July.

“It will be interesting to see the different strategies that teams adopt for the doubleheader,” Lequien said. “It’s certainly going to provide two different types of races by having one run completely in daylight and the season-finale finishing much later at night.

“We’re very much looking forward to returning to the kingdom (Bahrain) with Sheikh Salman [ bin Isa Al Khalifa, the track’s CEO] and his team, and to crowning our new world champions at the end of our first-ever doubleheader.”

Toyota Gazoo Racing is in the running to finish the season 1-2, a repeat of the 24 Hours of Le Mans.

Last season, Conway, Kobayashi and Lopez formed the highest-scoring trio (207 points), with their No. 8 car rivals just five points behind in the standings.

More racetrack drama is on the horizon.