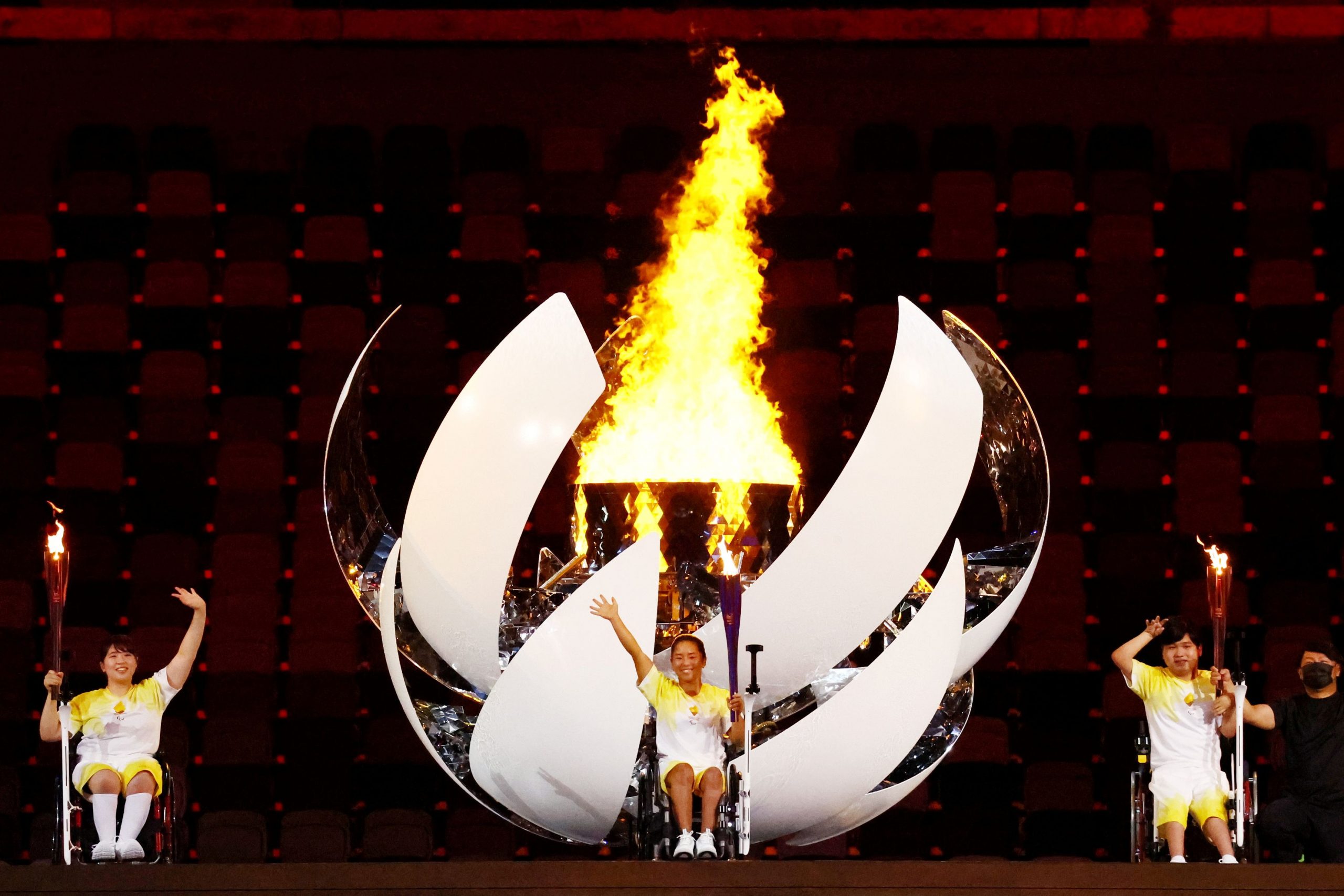 The cauldron is lit during the Opening Ceremony of the Tokyo Paralympics at the New National Stadium on August 24. (Athit Perawongmetha/REUTERS)

The New National Stadium returned to the spotlight 16 days after the Tokyo Olympics concluded, officially ushering in the Tokyo Paralympic Games with an aspirational Opening Ceremony.

The festivities got underway at 8 p.m., without spectators, in the latest state of emergency in the nation’s capital during the COVID-19 pandemic.

Dancers, musicians, actors and various visuals, including flags from 161 nations, combined with fireworks to light up the Tokyo night on Tuesday, August 24.

Their combined effort ignited a bright flame that flickered in all directions, dancing under the stars.

Moments earlier, the Paralympic flames entered the stadium, with three torchbearers, holding one apiece and sharing the duty.

As the first city to host the Paralympics twice, Tokyo 2020 organizers paid tribute to the 1964 Games by including a Paralympic champion from 57 years ago among the trio.

The night’s activities followed a familiar order. By 8:30, Paralympians, festooned in national uniforms and waving small flags, began marching into the expansive stadium.

The overall theme of the Opening Ceremony, “We Have Wings,” highlighted adversity people face in everyday life.

NHK reported that the Tokyo 2020 Organizing Committee chose this theme because it “seeks to raise awareness that everybody has wings through highlighting the courage of Paralympic athletes who are trying to spread their wings against adverse winds.”

The stadium transformed into a theatrical stage tied to the “We Have Wings” theme, and disabled actors and the central character of a dramatic performance, 13-year-old, wheelchair-user Yui Wago, portraying the “Little One-Winged Plane,” represented hope in believing. And she was convinced to fly at the imaginary Para Airport.

Emperor Naruhito officially proclaimed the opening of the Paralympic Games a few minutes after 10 p.m.

Throughout the evening, those attending the familiar proceedings, which were on a much smaller scale than an Olympic Games Opening Ceremony, including flagbearers from around the world, reveled in the night’s excitement.

At 9:35 p.m., the Japan Paralympic delegation, including 255 athletes, began marching into the stadium to cap the Parade of Nations. As the Paralympians waved to the gathered audience and TV viewers around the world, International Paralympic Committee President Andrew Parsons watched the proceedings along with Emperor Naruhito, Prime Minister Yoshihide Suga and Tokyo Governor Yuriko Koike.

After the Parade of Nations finished, Tokyo 2020 Organizing Committee President Seiko Hashimoto spoke at the dais.

Hashimoto said, “Welcome to Japan, welcome to Tokyo, I greet you all from the bottom of my heart. The whole world has faced immense challenges from the COVID-19 pandemic. I would like to express my gratitude and respect. I would also like to offer my thanks to the International Paralympic Committee, the Government of Japan and the Tokyo Metropolitan Government and many others.”

The seven-time Olympian continued: "These Games are generously hosted by the people of Japan. Since preparations for these Paralympic Games began our society has come together. Athletes and sport have the power to change the world and our future and that is precisely our mission.

“To all athletes, thank you for your hard work, dedication and perseverance."

Then it was Parsons’ turn to say a few words.

"When the Games were postponed, Paralympians were beacons of hope,” the IPC boss said. “They never stopped pursuing their dreams. They are a force of nature and a force for good.

"Paralympians, you gave your all to be here. Now is your moment to show the world your skills, strength and determination. Now is your time to be relabeled as champion, hero, friend, colleague, role model or just a human.”

He added:  "It is up to each and every one of us to play our part every day to make for a more inclusive society. We will honor our host, we will honor your trust, your omotenashi (Japanese hospitality), so the legacy these Paralympic Games will leave this country is a new perception of people with disabilities."


Additional Details about the Paralympics

Although the Afghanistan Paralympic Committee did not send a team to Japan for the Paralympics due to the Taliban takeover of the nation and the ensuing security crisis, the Afghanistan flag was carried in the traditional parade of nations.

The IPC informed reporters on Monday, August 23 that it wanted to acknowledge the war-torn nation during the Opening Ceremony. Parsons, the IPC chief, told reporters that an official of the Office of the U.N. High Commissioner for Refugees would carry the Afghanistan flag into the stadium.

Five nations are making their Paralympic debut this year: Bhutan, Guyana, Maldives, Paraguay and Saint Vincent and the Grenadines.

“With the opening ceremony hitting our screens tomorrow night, we want to let Kiwis know our team will not be attending as we continue our commitment to our COVID-19 operating principles and guidelines, aimed at keeping our team as safe as possible,’’ Paralympics New Zealand announced a post on Facebook on August 23.

Tokyo 2020 organizers, meanwhile, continued to push its promotional message on the same day.

“The Paralympic Games are a place where diversity is acknowledged, where everyone is given a fair chance to demonstrate their individuality and abilities and where athletes with various disabilities will push their limits with ingenuity,” said Mikako Kotani, Tokyo 2020’s sports director and head of the gender equality promotion team.

“By sharing the concept of diversity and inclusion with all athletes, spectators and everyone involved in the Games, we aim to ensure that afterwards each one of us will continue to practice the awareness we gained at the Tokyo 2020 Games, and that it will take root as a legacy in society. This is our goal.”

International Olympic Committee President Thomas Bach arrived in Tokyo a few hours before the Opening Ceremony. He is scheduled to attend Paralympic events for a few days before flying back to Europe.

This year’s Paralympics will feature two new sports: badminton and taekwondo, raising the total number of sports to 22.