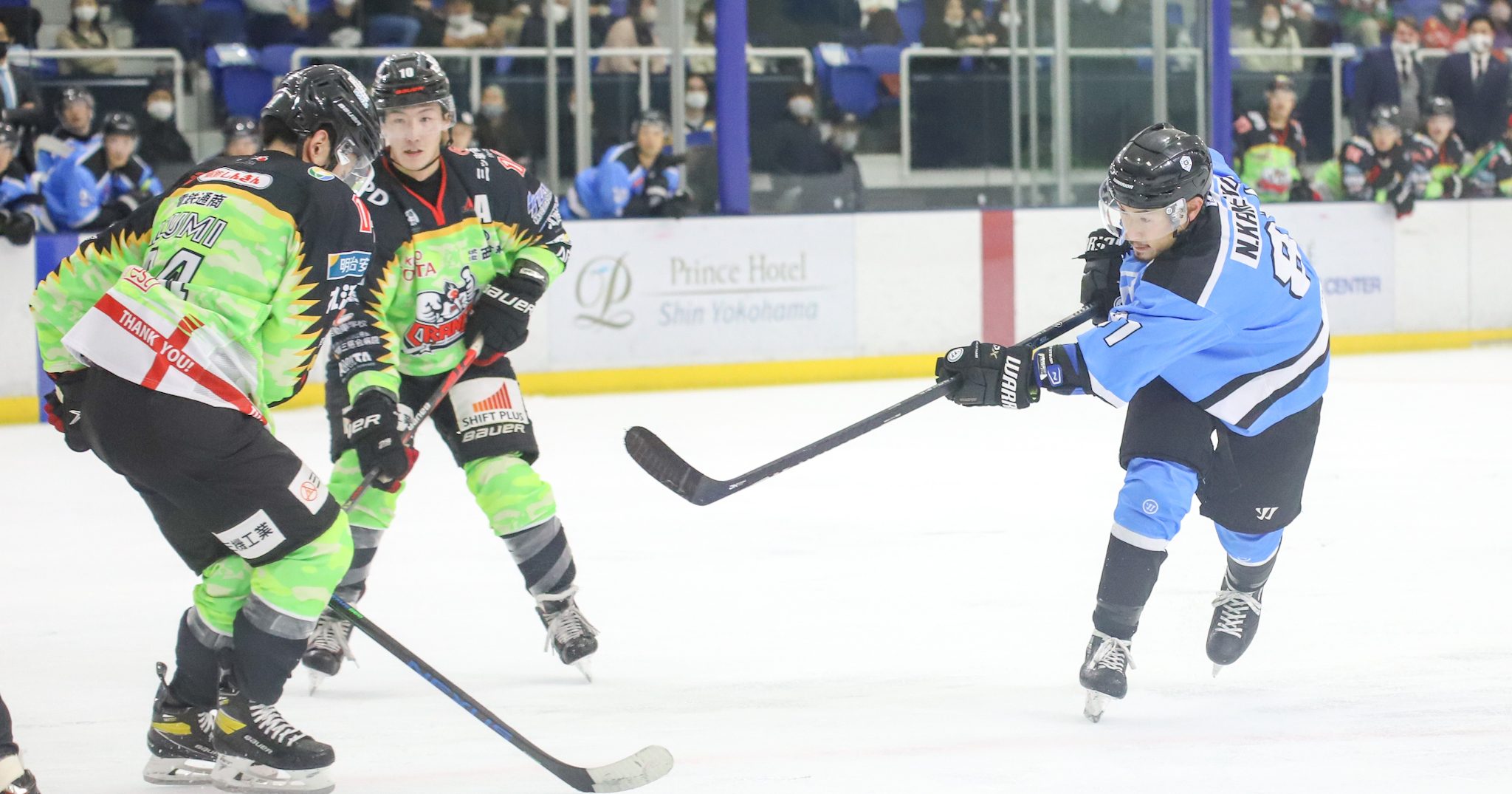 I’ve been fortunate to be able to attend several pro sports teams’ first-ever games (or a reasonable facsimile, such as a first-ever home game) over the years.

For instance, friends and I went to the first-ever Colorado Rockies game at their MLB spring training ballpark in March 1993 in Tucson, Arizona. And in Japan, the rapid growth of pro basketball over the past decade and a half provided opportunities to witness the first home games for the Shiga Lakestars, Kyoto Hannaryz, Akita Northern Happinets and Yokohama B-Corsairs in 2008, 2009, 2010 and 2011, respectively. There have been other teams in other sports, but you get the picture…

First games are fun because of the festive atmosphere and fans’ spirited support.

So the chance to see another new team in action for the first time in front of their home fans—even with a scaled-down audience due to COVID-19 prevention measures—was an opportunity I didn’t want to miss last weekend.

The Asia Ice Hockey League’s Yokohama Grits, a first-year expansion team, played their first official game at Shin Yokohama Skate Center on Saturday, October 17. Due to the pandemic, the regional league (comprised of teams from South Korea, Russia and Japan) is restricting competition to teams’ home countries. As a result, this nation’s five pro teams are competing in something called the Japan Cup, which kicked off earlier this month.

The Grits began their season with a pair of lopsided losses on the road (8-1 and 12-0) on October 10 and 11 against the Oji Eagles in Tomakomai, Hokkaido.

Then they returned home to regroup before back-to-back matches against the East Hokkaido Cranes, who are coached by Aldis Girgensons, a 52-year-old Latvian whose son, Zemgus, is a center for the NHL’s Buffalo Sabres.

Before the puck dropped to begin the first period last Saturday, a red carpet was rolled out on the ice and a ceremonial faceoff took place. Cheerleaders danced and smiled in the background off the ice. Fans clapped and snapped cellphone pictures.

Everyone at the venue, including 507 spectators, was ready for a new hockey chapter to begin in Yokohama.

New teams need competition in order to judge themselves against their established opponents. And the Grits have no history of success or failure, so everything is a clean slate for owner Akihito Usui’s club.

Therefore, general manager Takashi Mikoshiba and head coach Mike Kennedy, a former NHL center for the Dallas Stars, Toronto Maple Leafs and New York Islanders (1994-99), will be busy tinkering with the team’s on-ice product in the months ahead.

Kennedy was not at the team’s opener as he continued to complete a 14-day quarantine period after returning from his native Canada earlier in the week. He did, however, work on coaching tactics and game strategy with the Grits staff and players via online communication. 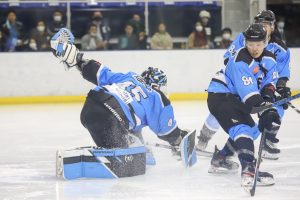 Grits goalie Yoshihiro Kuroiwa was tested early and often in games against the Cranes on October 17 and 18. Credit: Yokohama Grits

A Look Back at the Home Opener

Yokohama team director Yoshiyuki Asanuma managed the club from the bench over the weekend. His club fell behind by a goal 57 seconds into the game, when Cranes forward Takuma Kawai’s shot from close range zoomed past Grits goaltender Yoshihiro Kuroiwa.

In a game dominated by East Hokkaido’s offensive chances (38 shots on goal compared with Yokohama’s 13), Grits forward Shigenobu Kakudate was the first player sent to the penalty box—for slashing—after 2 minutes, 30 seconds had elapsed. East Hokkaido defeated Yokohama 4-1. (You can watch the game here.)

The Cranes didn’t capitalize on their first power-play opportunity, but still led 1-0 after a fast-paced opening period.

After the Zamboni retouched the ice during the 15-minute intermission, a time when many fans left their seats to grab a beverage and a snack from the concession stand, all eyes were once again focused on the action on the ice. (While all players wore helmets, all fans were required to wear face masks, and social distancing was observed with numerous open seats throughout the arena.)

After two penalties were assessed to the hosts within the first five-plus minutes of the second period, the Grits gave their fans something to cheer about. Forward Atsuki Ikeda rifled a wrist shot from near the right faceoff circle past Cranes goalie Yuto Ito to make it 1-1 at the 26:17 mark. 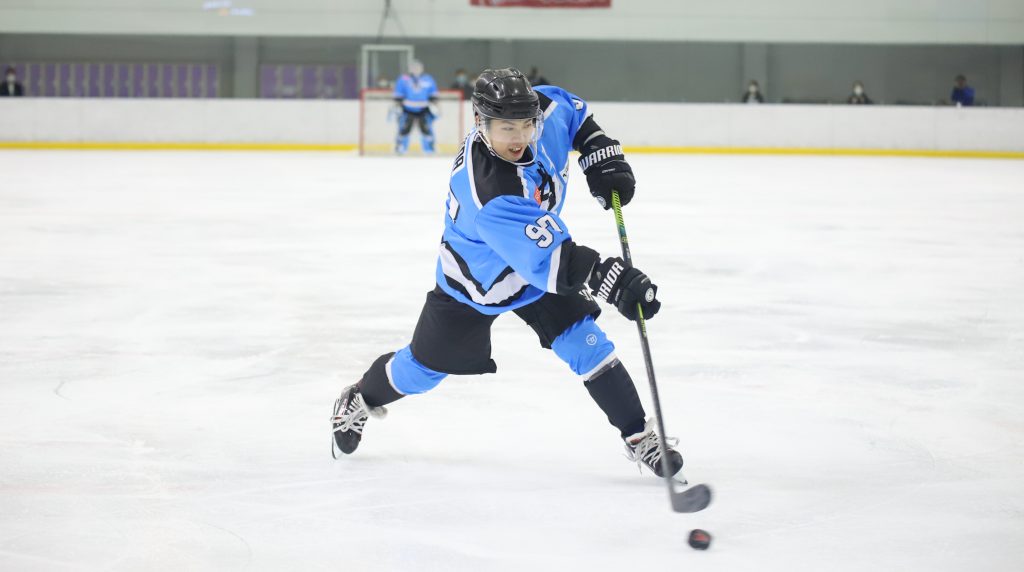 “It was, Ikeda said, “a great feeling.” And he’s hungry to keep doing it: scoring by utilizing his physicality and speed, he said.

Moments later, Kakudate blasted a rising slapshot that targeted the top-right corner of the goal, but Ito deflected it.

Fans reacted to the exciting play with “oohs” and “aahs” in unison.

The lead didn’t last for long.

East Hokkaido controlled the puck for larger stretches, which created ample scoring opportunities. And Shoma Izumi tapped the puck past Kuroiwa to put the visitors ahead 2-1 with under 9 minutes remaining in the second period.

In the third period, both teams’ intensity level picked up.

Naturally, the Cranes wanted to increase their lead.

At the same time, the Grits wanted to tie it up and have a shot at winning for the first tie in a Japan Cup match.

Credit Kuroiwa for keeping the score respectable. He was peppered with shot after shot throughout the 60-minute contest and made several excellent saves, including a difficult glove save after about 4 minutes, 20 seconds of play in the final period. He was tested many times and fared pretty well.

But with approximately 12 minutes remaining, Grits forward Shinnosuke Motegi found some open space in the crease in front of Ito and sent the fast-moving shot in the goalie’s direction. Ito, alert and with great positioning, knocked away the shot. 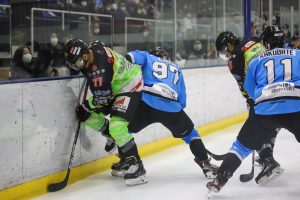 Defensively, the Grits didn’t recover effectively in the immediate sequence after this game-tying attempt. It led to defenseman Shinya Yanadori scoring on an on-the-move shot at the 48:13 mark, with Hiromichi Terao picking up the assist.

And near the midway point of the final period, East Hokkaido’s Kaigo Mineshima unleashed a one-timer from the slot that Kuroiwa somehow stopped from sailing into the net. Perhaps this was the best play of the game.

Even if it wasn’t, Grits fans cheered enthusiastically for what they had just witnessed. It was one of the defining moments of the home opener.

All in all, Yokohama’s Japan Cup home debut provided a glimpse of the team’s skills and current shortcomings, too. Fans saw the aforementioned goaltending skills of Kuroiwa. They also watched captain Shuji Kikuchi provide leadership on the ice and connect with his teammates in expressing joy by playing in front of their hometown supporters.

With two shots on goal apiece, Kikuchi, Ikeda, Naoki Kaneko, Kakudate and Hamashima were the team leaders in that category.

The Grits lost 4-2 on Sunday, October 18, slipping to 0-4 in the current tournament.

They’re back in competition on October 31 against the Tohoku Free Blades in Hachinohe, Aomori Prefecture. And their Japan Cup schedule includes nine upcoming games in November and two more in December.

Asia League Ice Hockey officials haven’t finalized plans for the 2021 portion of the current season while monitoring the global pandemic. It’s possible that teams from Japan, South Korea and Russia could compete in a revised tournament or playoff format. (The other Japan-based team in Asia League Ice Hockey is the Tochigi Nikko Icebucks.) 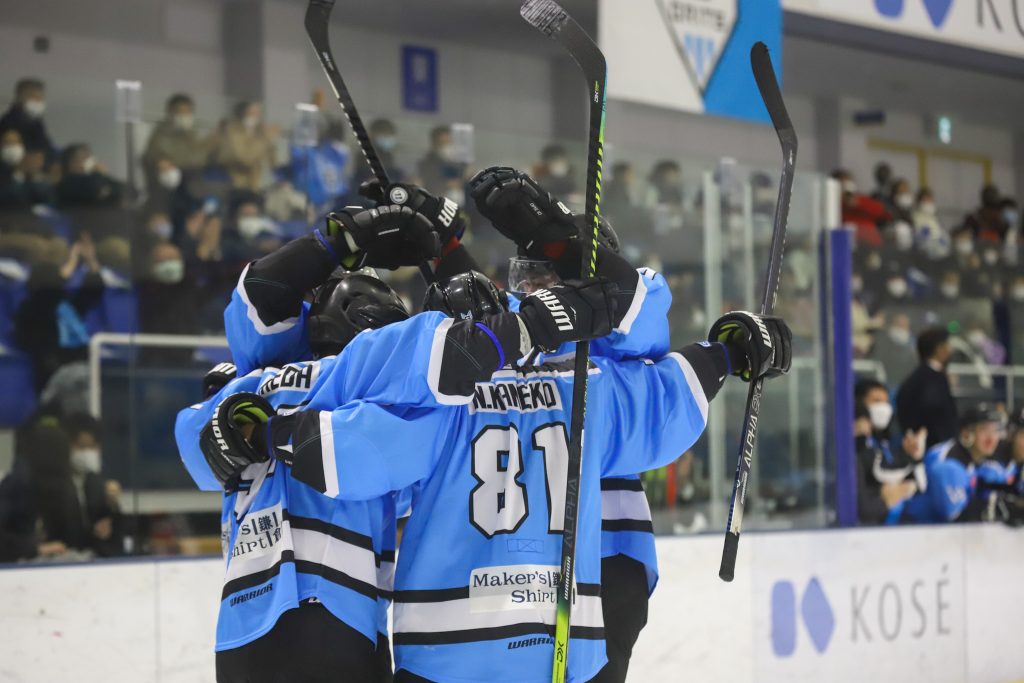 For now, the Grits are focused on overall improvement and establishing a winning foundation.

“We were aggressive. We had some [scoring] chances,” Asanuma commented via a Zoom call with reporters after the weekend’s first clash with the Cranes.

“Tomorrow is a challenge,” he noted. It is a message that sums up the team’s overall reality in its inaugural season.

The games to date, Asanuma said, have demonstrated that speed is one of the team’s chief strengths, so “we need to use it.”

Improvements include on-ice communication between players and being more aggressive. Which is why practice time is so crucial to working on those things.

“No excuses” is our message, Asanuma said, echoing the coaching staff’s message to the players. Pride and hard work are staples of the organization’s mission, he mentioned in the conference call.

Again, without a history of years or decades of games at Shin Yokohama Skate Center, the Grits entered a new era with their first Japan Cup match on October 17.

The significance of it did not escape Kikuchi’s thoughts.

Instead, he said the right things about playing at home when it was an important step for the team in establishing their roots in Yokohama.

“It was a great atmosphere with the fans,” the 34-year-old defenseman told reporters. “We appreciate their support.”

Noting the 1-1 score in the second period that morphed into 2-1, Kikuchi noted that the Grits’ third game developed a different narrative than their back-to-back blowout losses the previous week.

“In the middle of the game, we had a chance,” he said.

And that’s exactly what a new team should hope to have.