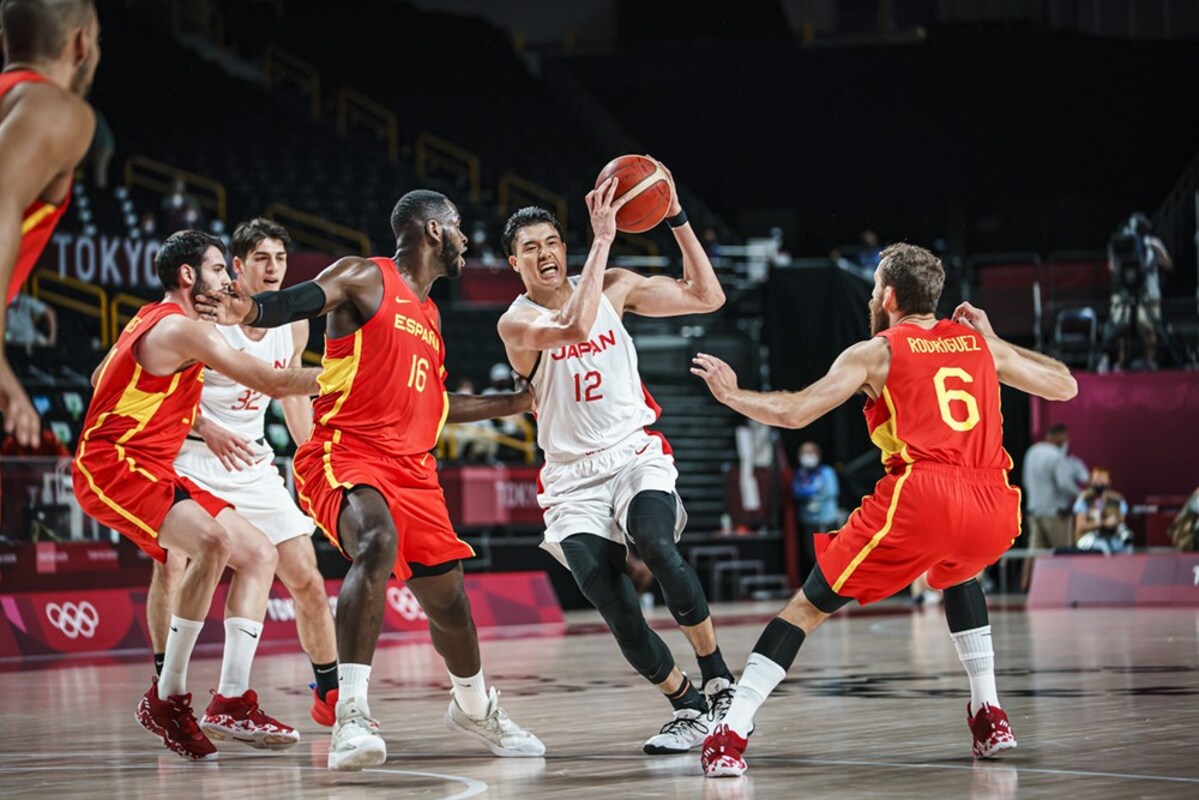 Japan's Yuta Watanabe runs the offense against Spain in the Tokyo Olympics on July 25, 2021, at Saitama Super Arena. (FIBA.BASKETBALL)

Yuta Watanabe brings energy, versatility and a hunger to win whenever he steps onto the basketball court.

So it’s no surprise that Japan men’s basketball team coach Tom Hovasse is eager to have the NBA free agent participate in the upcoming FIBA Asia Cup in Jakarta, Indonesia. The July 12-24 tournament is an important team-building opportunity for Japan, which is ranked 38th in the world.

Watanabe wasn’t with the squad for its 2023 FIBA World Cup Asian qualifier against Taiwan (an 89-49 victory) on Sunday July 3 or Australia (a 98-52 loss) two days earlier. (Japan advanced to the second round of qualifying.)

But Watanabe’s commitment to play for the national team in Indonesia is a big deal, according to Hovasse.

Bringing in a Veteran

Watanabe, 27, is one of the national program’s veterans. That makes him an important role model and tone-setting leader.

He hasn’t played for the national team since the Tokyo Olympics in the summer of 2021, after which he returned to the Toronto Raptors. Now in the NBA offseason, the Kagawa Prefecture native is ready to contribute again for Team Japan, which includes a pair of promising 21-year-old guards in Kawamura (B.League’s Yokohama B-Corsairs) and Tominaga (University of Nebraska), among other youngsters on the summer roster.

But it’s a scenario that Hovasse readily embraces.

The coach admitted as much in his post-game talk with reporters in Melbourne on Sunday.

“Having a player of his caliber is just going to help us immensely,” declared Hovasse, who took over as head coach to replace the departed Julio Lamas after the Tokyo Olympics.

A Look Ahead for the Akatsuki Five

After the game against Taiwan on July 3, Hovasse shifted his focus to preparing his players for the Asia Cup. Japan will face Group C foes Kazakhstan (on July 13), Syria (July 15) and Iran (July 17) in the first round.

“I think it’s going to give these guys some confidence,” said Hovasse, who coached the Japan women’s team to a silver-medal finish at the Tokyo Games.

“It’s gonna give us a little extra boost, so we have a small amount of time when we go back to Japan to get him into our game plan and our mindset of what we want to do as a team.

During the Tokyo Olympics, Watanabe’s all-around skills were on display in Japan’s trio of games. He had 19 points, eight rebounds, three assists and five steals against Spain, followed by 17 points, seven rebounds, two assists and two blocks versus Slovenia. In the Akatsuki Five’s final Olympic match, Watanabe finished with 17 points and nine boards.

He was second on the team in scoring (17.7). Fellow NBA player Rui Hachimura of the Washington Wizards led Japan with 22.3 points per game in the Olympics.

As the Akatsuki Five’s top leader, Hovasse’s voice carries clout when the subject is the current state of the national team.

“I’m excited, I really am,” Hovasse said of Watanabe’s return. “Looking forward to having him join us.”

Watanabe is accustomed to the physical toughness of the NBA after four seasons as a pro. He also suited up for Toronto’s NBA G League affiliate, the Raptors 905, along with the Memphis Grizzlies and their G League club, the Memphis Hustle.

So his participation in national team workouts and games can only benefit Japan.

As Hovasse noted on Sunday, Japan’s young players are gaining valuable experience learning to play together and overcome obstacles along the way. He cited examples from the blowout loss to Australia and the bounce-back win over Taiwan to illustrate his point.

“I think the physicality of the Australia game and the way the refs called it ― they let a lot of physical play go ― shocked us a little bit, especially the younger guys. They are not used to FIBA basketball,” Hovasse commented. “And we’ve been preaching physicality and toughness, so the physical side, I think, we were a little bit more ready for that today (against Taiwan).

Hovasse recognizes that Japan faces a significant challenge, a long, steep climb, in its attempt to reach the next level.

He mentioned the team’s No. 38 ranking during the July 3 news conference. He then said, “We’ve got a lot of young faces here, a lot of young players. Every team is going to be a challenge for us, and we just have to continue to improve, continue to play our basketball, and we’ll see where it will take us.”