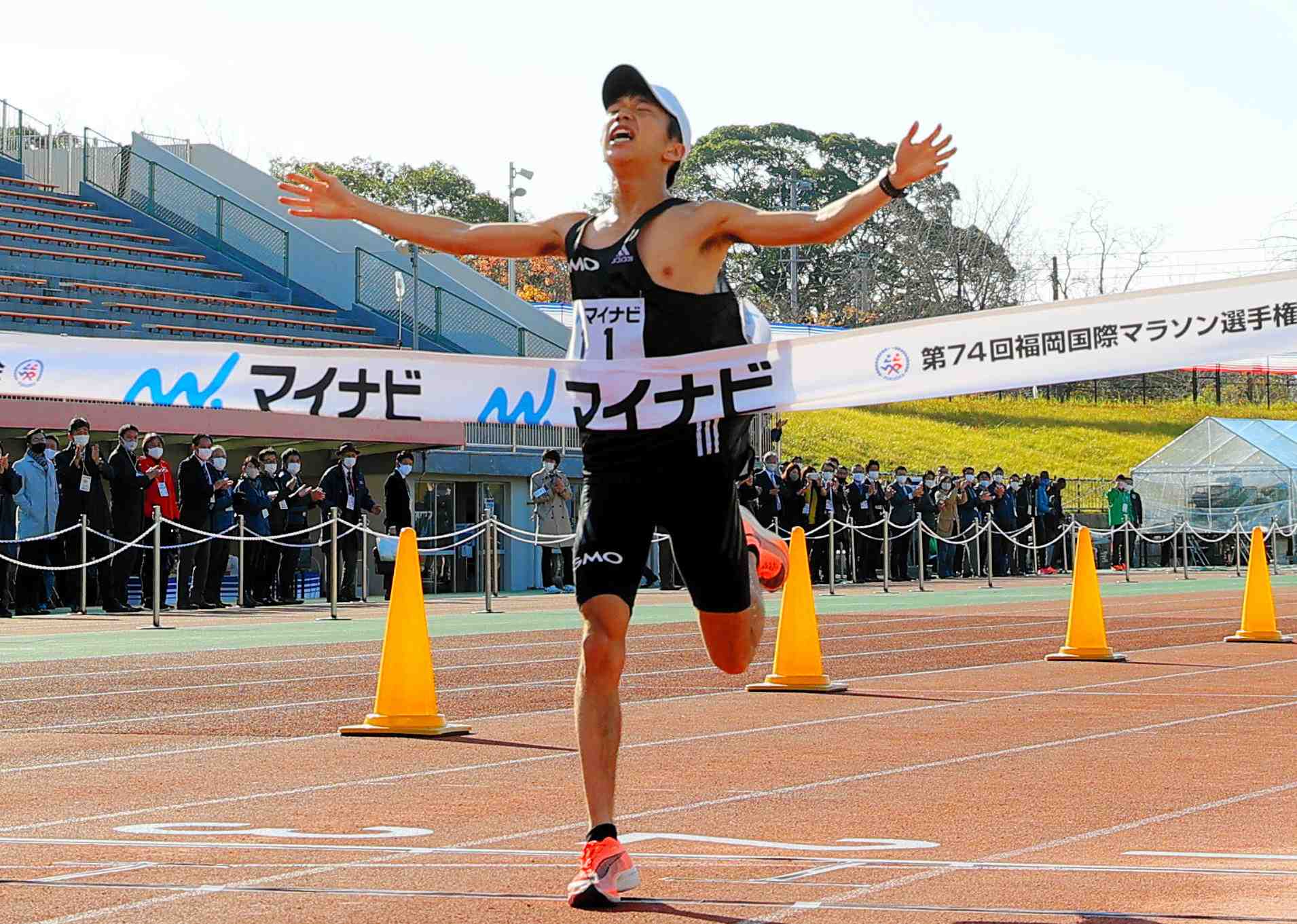 Yuya Yoshida had entertained thoughts about quitting competitive running after his graduation from Aoyama Gakuin University in March.

And it’s a thought buried in a distant galaxy inside his mind now.

Consider: Yoshida was the third-place finisher at the Beppu-Oita Marathon in February in his marathon debut. And he ran the race in 2 hours, 8 minutes, 30 seconds, which happens to be the second-fastest time by a Japanese in a marathon debut.

So what did the 23-year-old do for an encore last weekend?

It was a stellar performance that exhibited Yoshida’s talents in a race in which he rose to the occasion. He crossed the finish line in 2:07:05 and outclassed six other runners who also set personal-best times on a sunny autumn day in Kyushu. 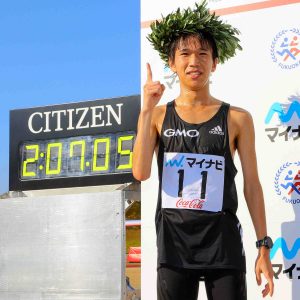 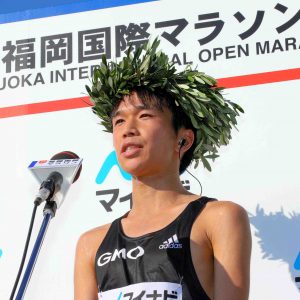 The race was Yoshida’s to lose, and he maintained his stamina and mental focus down the stretch.

In fact, Yoshida held the top spot from about the 30.7-km mark to the finish.

The 42.1-km (26.2 miles) test demonstrated that Yoshida had prepared well in the weeks leading up to the marathon, which had a scaled-down field of 70 contestants this year due to the global COVID-19 pandemic.

“The finishing position was more important than [a] fast time,” Yoshida was quoted as saying by the World Athletics website after the race. “I was aiming for this marathon since spring and I am happy to prove that I trained correctly.”

The proof was in the numbers: Yoshida completed the ninth-fastest marathon ever by a Japanese runner.

And he had plenty of energy at the end. See Yoshida’s sprint to the finish line here.

Several well-known marathon runners have enjoyed the sweet taste of victory at the Fukuoka International Marathon over the years, including Toshihiko Seko (1978-80, ’83), Americans Frank Shorter (1971-74) and Bill Rodgers (1977). Rodgers was at the height of his powers—with Boston Marathon titles (1978-80) and New York City Marathon (1976-79) among his wins in that era.

A year ago, Morocco’s El Mahjoub Dazza claimed the Fukuoka title in 2:07.10.

Yoshida didn’t come close to chasing a world record in this race, but he more than held his own.

It was a disappointing day for 2018 Boston Marathon champion Yuki Kawauchi, who was competing in his 104th career marathon. Kawauchi placed 19th in 2:13:59. 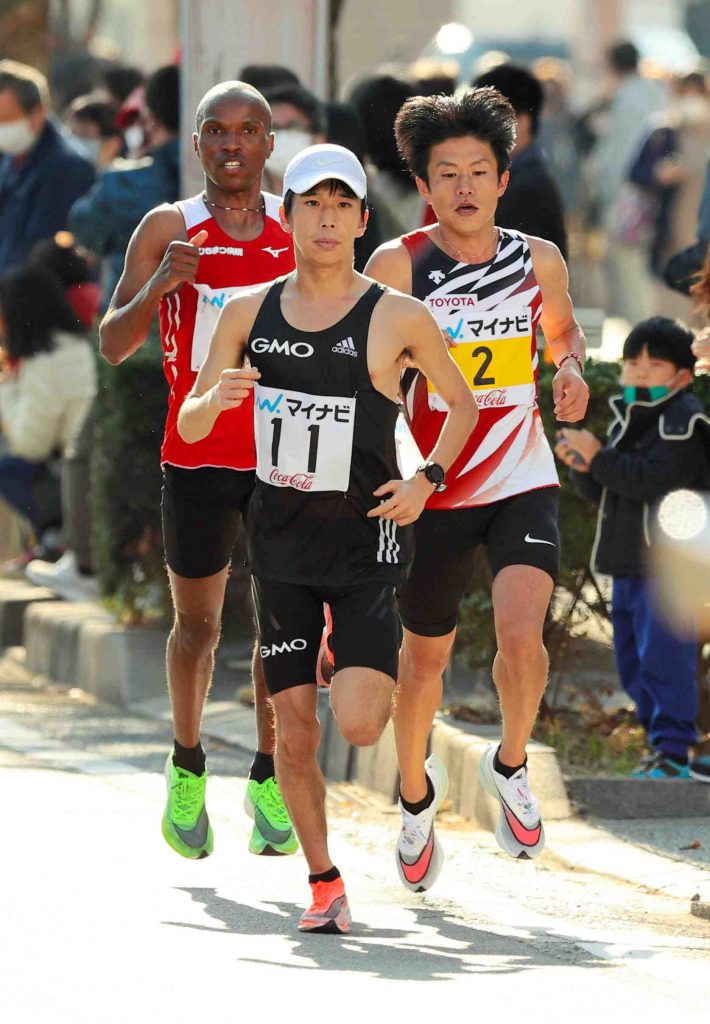 Yuya Yoshida was among the leaders throughout the Fukuoka International Marathon on December 6.

How the Race Unfolded

Yoshida was one of 13 runners at the front of the pack from the get-go. As they set the pace, the front-runners passed the 5-km mark in 14:56.

Buoyed by a tone-setting start, Yoshida maintained his position among the leaders as the race progressed. There were 10 men in front at the midway point (in 1:02:55), according to official results.

Yoshida continued to hold his own, reaching the 30-km mark with three others ahead of the rest of the field.

And for the rest of the race he maintained his poise and pace, building an insurmountable lead over the final several kilometers. 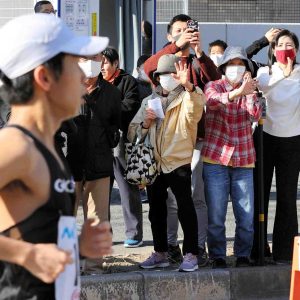 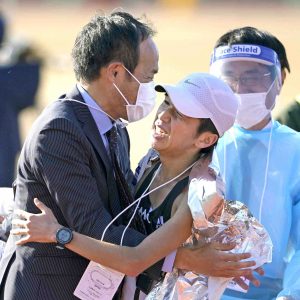 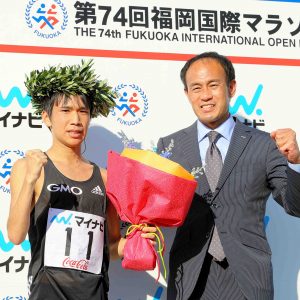 Sights from the 74th Fukuoka International Marathon on December 6.

In the run-up to the Fukuoka Marathon, coach Katsuhiko Hanada had trained Yoshida with one target in mind: outperforming Yuma Hattori, according to published reports. Hattori is on Japan’s Olympic marathon team.

Those plans didn’t reach fruition, though.

On December 3, the 27-year-old Hattori, the 2018 Fukuoka Marathon winner, pulled out of Sunday’s race with a right calf injury.

“I have been forced to withdraw from the December 6 Fukuoka International Marathon,” Hattori said in a statement. “To the race organizers, the media, and to the fans who had been looking forward to cheering me on in the race, I apologize from the heart. This setback has made me realize the difficulty of just making it to the start line of a marathon in peak condition.

“I believe this experience will help me grow further and succeed in my future goals. One of those will be to return to the Fukuoka International Marathon as a more mature athlete.”

While beating Hattori was a lofty target for Yoshida, it was a revealing look at his mindset in preparing for the race. He wanted to run the race faster than a recent champion, and demonstrate that he had the same skills as a future Olympian.

Ultimately, though, Yoshida’s background as a former Aoyama Gakuin University ekiden team member served him well in preparing for and winning a marathon for the first time.

Yoshida participated in the 96th Tokyo-Hakone Round-Trip College Ekiden Race in January, running the fourth of five legs on the first day of the two-day competition on January 3,

Yoshida completed his share of Aoyama Gakuin’s 107-km task in 90 minutes, first among all participants.

Aoyaka Gakuin finished its winning effort the next day in the prestigious event. And before the year’s end, Yuya Yoshida tasted victory again.

This time, it was a total individual effort, his battle against every other Fukuoka Marathon competitor.

Indeed, the college graduate has built a winning foundation as a marathon runner.