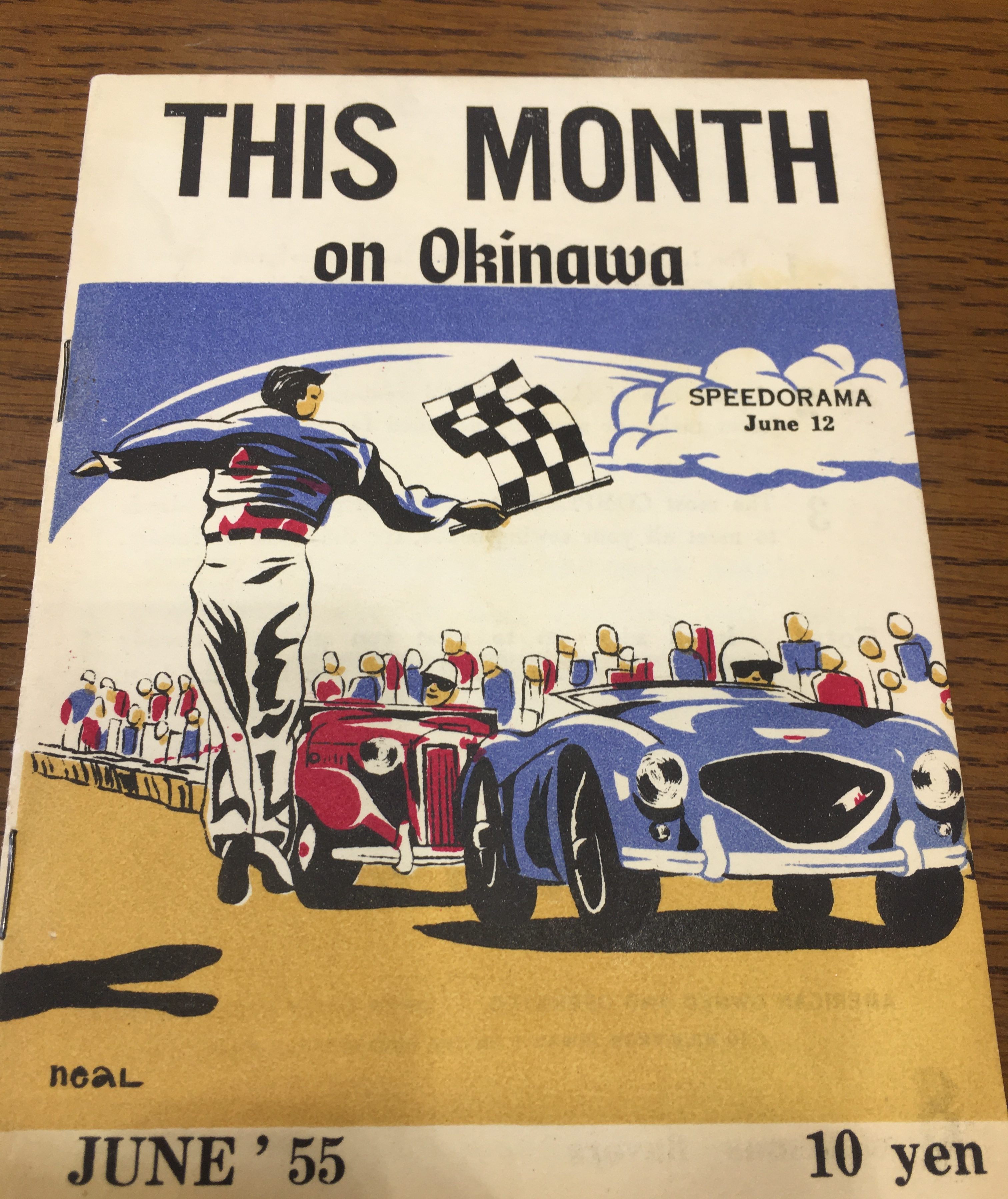 The magazine has long been a cultural and news bridge between the local Okinawan community and United States military personnel and their families on the island, and it remains an important channel for mutual understanding. Moreover, it regularly makes constructive recommendations on base issues and other local socio-political-economic matters.

This Week on Okinawa began as a monthly in June 1955, and in February 1961 it started to be published weekly. It was founded by the late Larry J. Krebs, a U.S. Army corporal who was honorably discharged in 1954 in Okinawa and stayed on.

Having attended the University of Chicago (but not graduating), he had been assigned as the head of an English language school established in Nago City by the U.S. Civil Administration for the Ryukyu Islands (1950-1972). The goal was to help students prepare for scholarship opportunities to study in the United States.

Lamenting the lack of English language media sources (limited primarily to the military’s Far Eastern Network radio and the Pacific Stars and Stripes), Krebs decided to use his $300 in severance pay to start the magazine.

He had great difficulty getting permission for the publication because of the anti-democratic policies of the military-led USCAR in those days. Krebs’ first application to military authorities was rejected for the lack of funds. When he reapplied, he was finally granted permission in December 1954, but only for three months.

Banks were not willing to give him a loan, especially if future permission from the military was uncertain. Investors similarly could not easily be found. Companies, moreover, did not want to advertise in an unknown magazine whose life expectancy was also unknown.

Over the next six years, he had to re-apply numerous times for permissions, getting six-month and then two-year permits, until he finally received unlimited permission for the publication in 1960.

His first attempt at publishing was Okinawa: The Quarterly Review of Okinawa and the Far East in the spring of 1955. The quarterly format was selected to get the hang of it — a magazine appearing every three months — but also probably because of the aforementioned limited permission. In June that year came This Month on Okinawa, which required a quicker pace and faster production turnaround. Then, five and a half years later, the first weekly issue began to be produced.

Krebs published from a rented room, sans telephone, in the Tuttle Bookstore in the Makiminato area of what was then Urasoe Village. He had a former student helping him, but he initially had to do it all: owner, editor, reporter, fact checker, accountant, marketer, distributor, etc.

Eventually, that student (MIYARA Chōshin) became his business manager and came to help Krebs immensely. “It was a steep learning curve for both of us,” Miyara, now 92, told me recently when I interviewed him in Okinawa.

Printing was done by a small print shop, but the typesetter had only an alphabetic understanding of English, and Krebs had to proofread the type as well. As such, it took time to publish and was a struggle to keep on schedule. Money, too, was tight.

The military itself made things difficult as well. In addition to the aforementioned permissions, there was occasional displeasure over his reporting.

Although Krebs had formerly served in the military, he did not accept its policies at face value. Indeed, he sought to take up the problems of the U.S. administration in Okinawa.

One of his editorials, for example, was titled “More Autonomy for the GRI,” the acronym for the local government of the Ryukyu Islands, which fell under USCAR. The 1950s were considered the “dark years” of the administration. A critical voice was needed.

Krebs became known for his humanism and liberalism within Okinawa by media colleagues and friends he made through his reporting and business. His magazine’s motto was “Passion, Truth, and Accuracy.” Krebs took these words seriously, along with his goal of introducing a free English language press to Okinawa.

The very first issue of the magazine ー a one-time quarterly ー discusses its credo. Krebs, writing on a page he entitled “Editor’s Desk,” felt “every magazine should have one.” His 300-word essay, while not specifically spelling out the publication’s “guiding principle or belief,” discusses the strategic importance of Okinawa while arguing the need for the U.S. government to get the administration side correct:

With unlimited control and virtually unlimited funds, if we can’t make the American dream work for 800,000 Ryukyuans, then 800,000,000 Asians will know it. We may not only lose face; we may lose Asia.

Krebs later described it as “the first publication to criticize American policies on Okinawa when we felt they needed criticism.” Further, he noted that he:

[Felt] proudest about helping introduce the concept of a free press to the island. There is no reason to suspect that freedom of the press may be good elsewhere but not good here — and yet this for a long time was the viewpoint of those in charge of the island. Okinawa has come a long way since those days and will go much further. THIS MONTH will go with it.

Because of this criticism, he was constantly battling with the military leadership, who were uncomfortable with being uncomfortable. “It is sometimes difficult for targets of criticism to remember,” he wrote in one issue, “that the concept of ‘His Majesty’s Loyal Opposition’ is a healthy one. What we say in this magazine is said as an American, a former member of the military, a representative of the press, and as a resident of the community.”

In a later issue published just before Krebs died, he wrote, “High Commissionering [sic] is a difficult trade and a lengthy apprenticeship is necessary. But a wise administrator knows when to give in and when to make a determined stand on relatively minor matters.”

The late MIYAGI Etsujirō — who was a reporter with the Stars and Stripes before becoming a professor of journalism at the University of the Ryukyus and later the first director of the Okinawa Prefectural Archives — wrote about Krebs’ contribution in his book on Americans and postwar Okinawa, and in a book about newspapers in Okinawa. Krebs was “loved” in part because he directly challenged the injustices in Okinawa.

Miyara agrees. Krebs “represented the feelings and frustrations of Okinawans.” This obviously made him unpopular with the military, but he did not care.

Indeed, he was very proud of the fact that it was This Month that “introduced the concept of a free press” in Okinawa:

The press may have been free before, but no editor dared use that freedom and, for good reasons, knew it was dangerous to do so. In ’56, the feeling that any publication that dared criticize the local military or civil government would be shut down was still common. “We’ll continue to call our shots the way we see them,” we said that year. “As for being given the old heave-ho, we long ago decided that there were worse things in the world.”

In a 1959 interview, Krebs stated: “In one sense, my magazine’s independent view is outmoded. Both Ryukyu dailies (Ryūkyū Shimpō and Okinawa Taimusu) — whose editors like to say that my magazine was the first truly independent publication on the island — now print the news as they see it.”

Krebs’ mother took over the magazine upon his death, staying for 10 years before she became ill. Her employees then purchased the company, and one of those, ASHIMINE Kinsuke, operates it today with a much smaller staff than in its heyday.

He can afford to do so because of technological advances, little employee turnover, and consistent advertising revenue. It has been located in the same building since the early 1970s.

It is especially significant that someone from Okinawa owns and runs it now. Ashimine himself was born April 1, 1942, three years to the day after the Battle of Okinawa began. He not only experienced the battle fleeing around the island with his family, but also all stages of the postwar. Yet he retains a positive attitude and is proud of the fact that he has been able to bring the two communities together.

The magazine has sponsored English speech contests for local students, the publication of a book about Okinawa, and introduced countless stories of friendships beyond the boundaries of the base fences.

Having just celebrated its 65th anniversary, This Week on Okinawa is currently examining expanding its operations to include an internet presence, the use of videos, the hosting of lectures, and greater partnering with local, national, and international organizations. This is important as the types of English readers in Okinawa are changing, and the market has expanded to well beyond just Okinawa itself.

We can look forward to seeing someone 65 years from now also writing about the 130th anniversary of this vital weekly magazine.