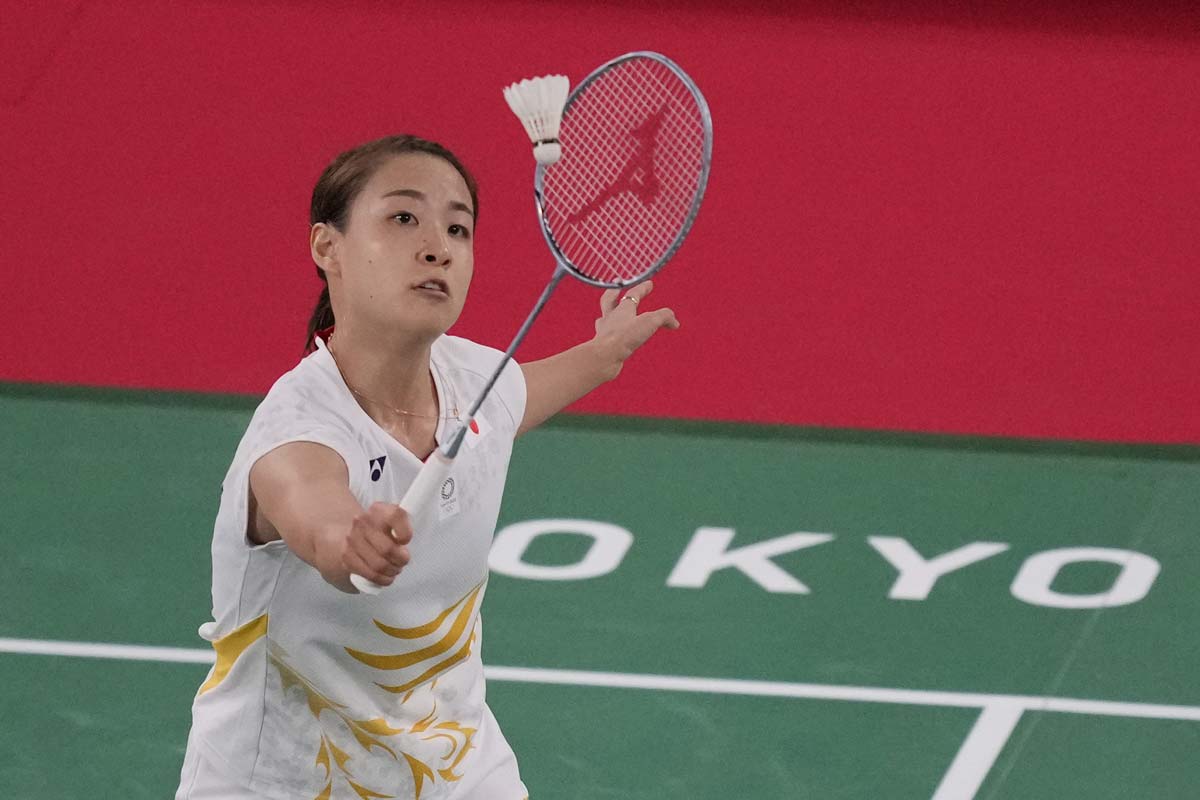 Japan's Nozomi Okuhara play against Canada's Michelle Li in the women's singles round of 16 on July 29 at Musashino Forest Sport Plaza. (Dita Alangkara/AP)

It was a day of solid results for Japan in the women’s singles competition at Musashino Forest Sport Plaza.

The Japanese standouts’ victory propelled them into the quarterfinals on Friday, July 30.

The rest of the day saw a series of lost chances for Japan. In the mixed doubles semifinal, Yuta Watanabe and Arisa Higashino going up against China’s Yi Lyu Wang and Dong Ping Huang lost their advantage in the second game and never recovered, losing 23-21, 15-21, 14-21.

In a battle to the last point, Japan’s women duo Wakana Nagahara and Mayu Matsumoto dueled against South Korea’s Soyeong Kim and Heeyong Kong, but lost 21-14, 14-21, 28-26.

"It hurts that we weren't able to show what we are made of at the end," Nagahara was quoted as saying by Kyodo News. "I feel bad for all the people that have given us their support."

Her doubles partner also lamented how their tournament ended.

"All the effort we have put in until now has gone to waste in this game and I feel really bad about that,”Matsumoto said, according to Kyodo News. “I got the impression that the South Korean pair's aggressive play put us under pressure."

Fellow Japanese Yuki Fukushima and Sayaka Hirota were also ushered out of the quarterfinal by China’s Qing Chen Chen and Yi Fan Jia, who took the match 18-21, 21-10, 21-10.

Khyzhniak Outclasses Moriwaki in Round of 16

Middleweight Yuito Moriwaki’s medal aspirations ended with a round of 16 defeat to Ukraine’s Oleksandr Khyzhniak at Kokugikan Arena.

Khyzhniak won all three rounds on all five judges’ scorecards.

Moriwaki, a 24-year-old Tokyo native, represented the Japan Self-Defense Force at the Olympics.

In the evening session, women’s flyweight Tsukimi Namiki fared better, winning against Brazil’s Graziele Sousa, also in a round of 16 match. The judges were unanimous that Namiki won the first and third rounds, while they were split with three in favor of Namiki in the second.

The 22-year-old Namiki moves on to the quarterfinal round, where she will face Colombia’s Ingrit Lorena Valencia Victoria on Sunday, August 1.

Four finals took place at the Sea Forest Waterway, with medals up for grabs in four categories. The final was much anticipated as none of the Rio 2016 medalists made it to the last stage of the competition, leaving the podium wide open.

In the lightweight men’s double sculls, Ireland’s Fintan McCarthy and Paul O’Donovan grabbed gold. The duo had scored the world record on July 28 (6 minutes, 5.33 seconds), and finished in the final with a time of 6:06.43.

Italy’s Valentina Rodini and Federica Cesarini in the women’s category took first place with a time of 6:47.54. The race with runner-up French team Laura Tarantola and Claire Bove was so close (just a 0.14-time difference) that the Italian pair waited until board results were posted to finally collapse in a celebratory cry. Rodini and Cesarini grabbed Italy’s second gold medal at the Olympic Games.

In the men’s pairs, Romania’s crew of Marius Cozmiuc and Ciprian Tudosa had the fastest time in the semifinals. The duo, however, missed out on the gold medal by conceding to Croatia’s brother pair, Martin and Valent Sinkovic, who finished the race with 6:15.29.

New Zealand’s Grace Prendergast and Kerri Gowler struck gold in the women’s pairs, with a time 6:50.19.

Greece scored three fourth-quarter goals and prevailed 10-9 against Japan in an entertaining men’s Pool A preliminary round match at the Tatsumi Water Polo Centre.

Marios Kapotsis and Konstantinos Genidounias led Greece with three goals apiece, including one each in the fourth quarter.

Seiya Adachi had a team-high three goals for Japan. He also attempted six shots to lead the club in that department. Atsushi Arai and Yusuke Inaba both scored two goals.

In other Pool A matches, Hungary hammered South Africa 23-1 and Italy topped the United States 12-11.

South Korea scored the winning run in the bottom of the 10th when Euiji Yang was hit by a pitch with the bases loaded, allowing Kunwoo Park to score the winning run at Yokohama Stadium.

Israel got on the scoreboard in the third inning, thanks to a two-run homer by former major leaguer Ian Kinsler.

South Korea countered with its own two-run homer by Ji Hwan Oh in the fourth.

Kinsler is one of eight players on Israel’s squad who has major league experience.

Another player with major league experience, Ryan Lavarnway, hit a two-run shot in the sixth to give Israel a 4-2 lead.

South Korea took a 5-3 lead in the seventh on two solo homers by Jung Hoo Lee and Hyunsoo Kim and an RBI double by Ji Hwan Oh.

But the scrappy Israel team fought back and tied the game at 5-5 in the top of the ninth on Lavarnway’s second solo homer of the night.

Made up mostly of U.S.-based Jewish players, Israel went 17-4 in European qualifying.

The teams finished the first half at Yoyogi National Stadium separated by just one point. Japan pulled to within two points with five minutes left in the game to reduce South Korea’s lead to 25-23, but late goals by Eun Hee Ryu and Yura Jung sealed the win.

Ryu finished the game with nine goals, including three in the last 10 minutes.

South Korea had not lost against an Asian opponent at the Olympics since Los Angeles in 1984 and extended its win streak over Japan to nine games.

Japan lost to the Netherlands by a score of 32-21 in its opening match before winning 29-26 win over Montenegro later in the day.

The hosts next face Angola on Saturday, July 31, before meeting facing Norway in their final Group A match Monday, August 2. The top four teams in each six-nation group advance to the quarterfinals.

The Serb was 5-for-10 on break-point conversions, while Nishikori was 0-for-1.