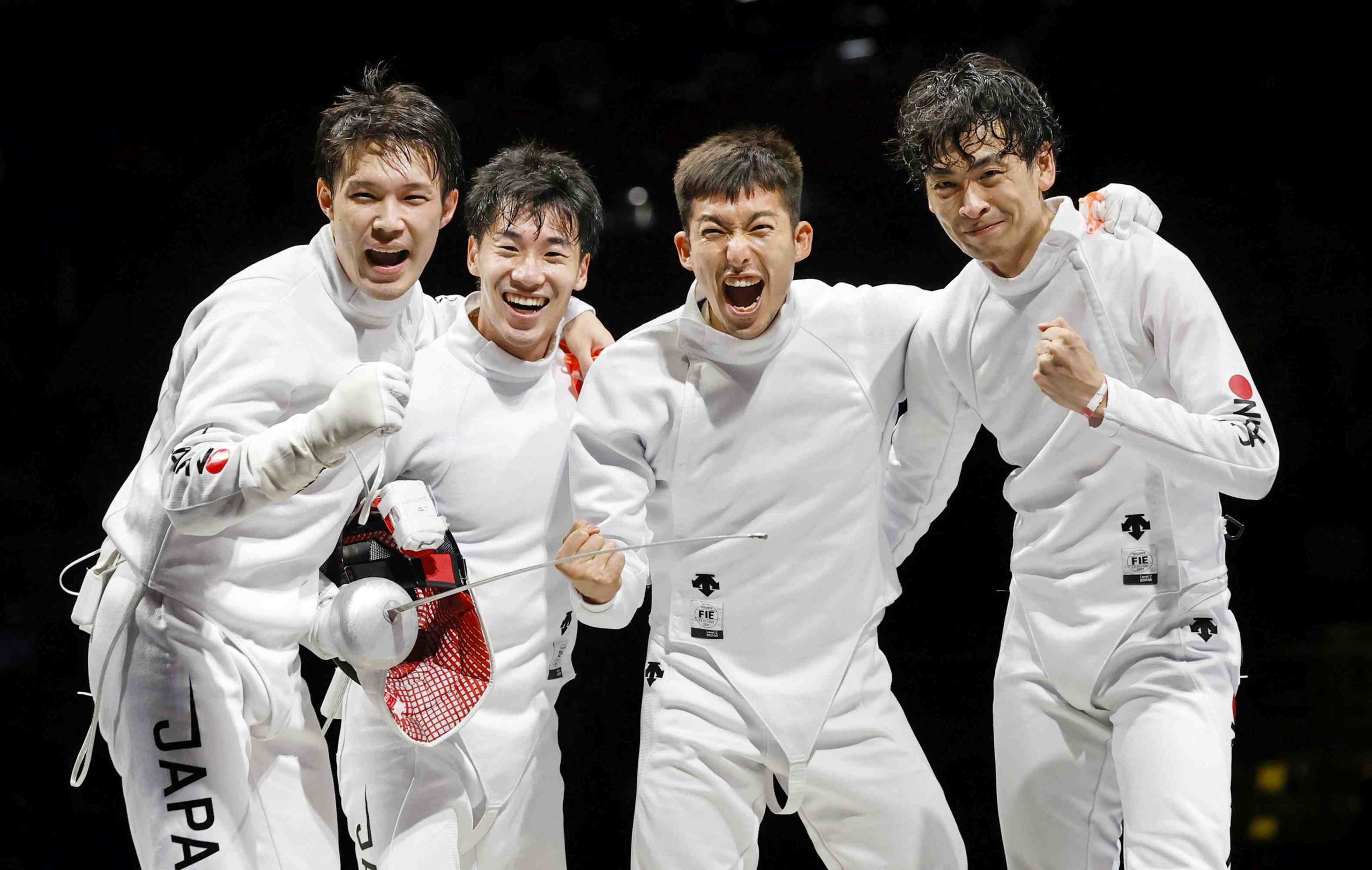 In a historic win Japan gained the gold medal in the men’s epee final against the Russian Olympic Committee’s team, claiming the title with a 45-36 decision in the match.

This news came as a surprise triumph, as it’s the first medal for Japan in this category, and prior to the match the team composed of Masaru Yamada (27 years old), Satoru Uyama (29), Kazuyasu Minobe (34) and Koki Kano (23) was ranked eighth worldwide.

“I can’t believe this, please tell me this is not a dream!”, said an elated Kano after the victory at Makuhari Messe in Chiba Prefecture.

Japan started the match strong, with Masaru Yamada coming against Sergey Bida ー who is ranked No. 2 worldwide ー and led the first rotation by a small margin 5-4.

After that, Japan managed to secure a five-point lead, finishing the standoff between Uyama and Bida 25-20 for Japan.

The Japanese team then managed to preserve the lead right until the final ninth rotation, when Kano triumphed against Bida to account for the final score.

Yamada commented with satisfaction to NHK after the 51-minute bout: “When I saw how strong we were in the first rotation, I first believed that we could win. The fact that we used that strength, and carried it until the end to victory, makes me extremely happy.”

Japan reached the final after a strong morning in which the team prevailed in both of its matches. The Japanese trio breezed through the round of 16 against the U.S. (45-39) and narrowly surpassed the No. 1 ranked team of France, which won the gold at the 2016 Rio Games, in the quarterfinals (45-44).

With this win, Japan brought the total gold medal count to a whopping 17, the highest number of gold medals Japan has ever achieved in the Olympic Games. This year’s host country won 16 gold medals in Tokyo in 1964 and again at the 2016 Rio Games.

The Australian sensation finished the race in 51.96 seconds, in the process breaking her own Olympic record (52.13) that she set on Wednesday, July 28 in the same pool.

“I still can’t believe I’ve just won a gold medal,” McKeon commented after the race. “The emotions will really come out when I get back to Wollo (her hometown of Wollongong in New South Wales).

“I’ve never won an Olympics or worlds [world championships] individual title. That’s what the Olympics is all about, to be able to stand on top of that podium.”

Australia has enjoyed success in the women’s 100 freestyle over the decades, with Dawn Fraser winning it three times (1956, 1960 and 1964, in Melbourne, Rome and Tokyo) and Jodie Henry accomplished the feat at the 2004 Athens Games.

In other swimming finals, South Africa’s Tatjana Schoenmaker broke the world record in the women’s 200 breaststroke final, winning the race in 2 minutes, 18.95 seconds. American Lilly King was the runner-up in 2:19.92.

Russian Evgeny Rylov was victorious in the men’s 200 backstroke (1:53.27), while Ryosuke Irie was a distant seventh in 1:57.32. The Japanese veteran swimmer, appearing  in his fourth Olympics, said he was pleased to still be competing on the global stage.

“I’ve taken part in the Games since 2008 and I’m happy to get the taste of this stage ([in Tokyo] with my fourth time,” Irie said, according to Kyodo News.

China’s Shun Wang triumphed in the men’s 200 individual medley (1:55), while Daiya Seto and Kosuke Hagino finished fourth and seventh, respectively, well off the pace. Seto completed the race in 1:56.22, more than a minute faster than his Japanese teammate

“I couldn’t get the medal at the end but at least I could improve my time [1:56.86] from the semis,” Seto, a Saitama Prefecture native, was quoted as saying by Kyodo News. “It’s a bit disappointing not to get a medal but I’m happy to have swum together with Kosuke on this dream stage and to compete together.”

Former major leaguer Melky Cabrera’s two-out single to left field in the fifth inning lifted the Dominican Republic to a 1-0 victory over Mexico in a Group A opening round game at Yokohama Stadium.

Angel Sanchez pitched five scoreless innings to pick up the win. He allowed two hits, walked one and struck out one.

Both teams left six men on base in a game that started at 12 p.m.

In the evening game, the United States trounced Israel 8-1, jumping out to a 3-0 lead in the first inning.

The United States women’s basketball team trailed 30-28 after the opening quarter, but found its rhythm at both ends of the court shortly thereafter and cruised past Japan 86-69 in a Group B preliminary round game at Saitama Super Arena.

“Japan is a tough team to play against,” Staley said. “After the first quarter I thought we did a great job disrupting them and not allowing them to take and make as many 3-point shots uncontested. We just forced them to put the ball on the floor and then our bigs got involved. I was happy that we locked down and got that done.

“I’m happy for our team because we are slowly coming together and playing the style of play we need to play to not only get better, but just compete and to get out of pool play because we’ve got a tough pool.”

Australia’s Matt Wearn leads the overall results, and the top 10 qualifiers make it into the medal race. Japan’s Kenji Nanri was ranked 30th at the end of the day and didn’t make it into the final race.

In the men’s skiff 49er event, Leo Takahashi and Ibuki Koizumi placed fourth in the seventh and ninth races in Kamakura, Kanagawa Prefecture. They are currently in 13th place, with three more races to qualify for the medal race.

Ai Kondo Yoshida and Miho Yoshioka also had a successful day, placing second in the fifth and sixth races in the women’s two-person dinghy 470 event in Zushi, Kanagawa Prefecture. This puts the duo in fourth in the overall rankings, with four more preliminary races until the medal race.

Poland Improves to 3-1 with Strong Effort Against Japan

Poland’s Jakub Kochanowski and Mateusz Bieniek each had four blocks. Kochanowski had a team-high 12 block attempts, one more than Bieniek. For Japan, Ishikawa, Masahiro Sekita and Taishi Onodera had four blocks apiece, with Onodera leading the way in chances (13).

Japan fell to 2-2 in the preliminary round, with victories over Venezuela and Canada and its other defeat to Italy

Poland, which meets Canada on Sunday, August 1, improved to 3-1 in Group A and earned a berth in the next round.

Whether Japan advances or not will be determined on Sunday, when it faces Iran, which fell to 2-2 after a four-set loss to Italy on Friday.

Sweden scored two second-half goals in a 3-1 victory over Japan in a women’s quarterfinal match at Saitama Stadium.

For Nadeshiko Japan, Mina Tanaka’s 23rd-minute goal tied it at 1-1.

Sweden finished with 13 shots to Japan’s eight. Magdalena Eriksson gave Sweden a 1-0 lead in the seventh minute before Tanaka evened the score.

Stina Blackstenius broke the tie in the 53rd minute and Kosovare Asllani converted a penalty kick for the final tally in the 68th minute.

In other women’s quarterfinal matches, Canada beat Brazil 4-3 in a penalty shootout at Miyagi Stadium. Neither team scored in regulation or extra time.

At International Stadium Yokohama, the United States defeated the Netherlands 4-2 in a penalty shootout. The teams were tied at 2-2 after extra time.

Zverev will meet Russian Karen Khachanov in the final.

Play Suspended in Second Round Due to Bad Weather

American Xander Schauffele held the lead in the second round of the men’s golf tournament when play was suspended due to adverse weather conditions.

Schauffele shot an 8-under 63 at the Kasumigaseki Country Club before play was halted for a second time due to rain. Lightning had forced organizers to stop play earlier Friday.

Mexico’s Carlos Ortiz was one stroke off the pace after a 67 gave him a two-day total of 132.

Masters champion Hideki Matsuyama had six birdies in a bogey-free round and moved up the leaderboard but wasn’t able to finish his round. He was tied for third when play was halted.

With a better weather forecast for Saturday, July 31, golfers that couldn’t finish their second rounds will likely see an early start.

China’s Long Ma won the gold medal in the men’s singles category, defeating Zhendong Fan, also of China and the world’s No 1 player in the event, four games to two at Tokyo Metropolitan Gymnasium.

The two rivals will next come together in the men’s team round, which starts on Sunday, August 1.