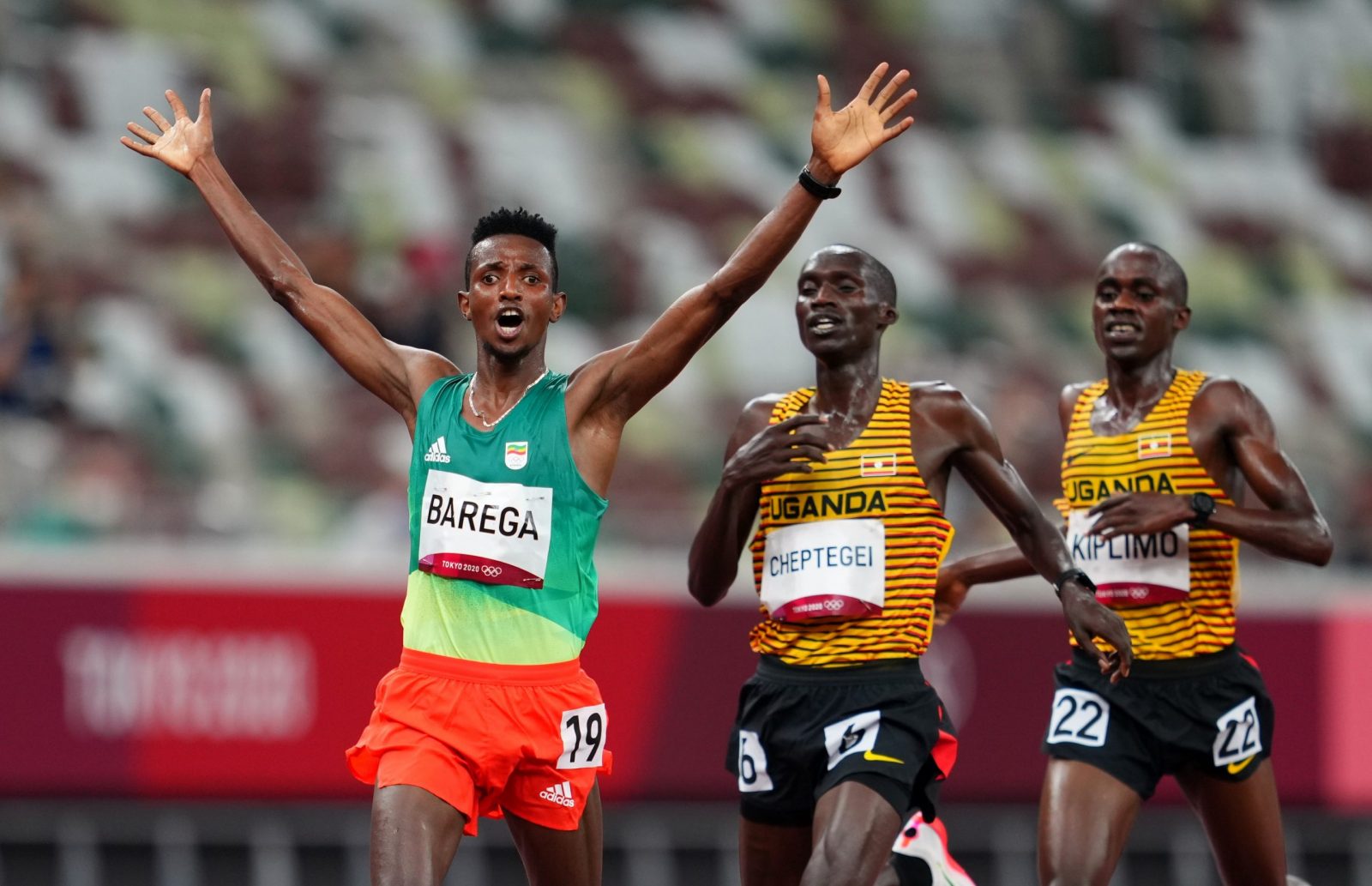 Ethiopia's Selemon Barega celebrates after winning the men's 10,000 meters ahead of Uganda's Joshua Cheptegei and Jacob Kiplimo on July 30 at the New National Stadium. (Aleksandra Szmigiel/REUTERS)

Ethiopia’s Selemon Barega saved the best for last in the men’s 10,000 meters on the opening night of the athletics program at the Tokyo Olympics.

Barega capitalized on his tactical running on the final lap and beat Uganda’s Joshua Cheptegei, the world-record holder, to the finish line at Tokyo’s New National Stadium on Friday, July 30.

Every stride that Barega took over the final several laps seemed connected to the last gasps of energy that he used up in achieving victory in 27 minutes, 43.22 seconds.

Cheptegei grabbed the silver medal in 27:43.63, while fellow Ugandan Jacob Kiplimo crossed the line in 27:43.88 to earn the bronze.

Barega, a 21-year-old Addis Ababa native, gave a hint of things to come early in the race ー he was in second place at the 2,000- and 3,000-meter marks ー before settling into a slower pace for the middle portion of the race.

Then he moved into seventh over the next 1,000 meters and maintained his position as a medal contender the rest of the way in the entertaining 25-lap race.

With 1,000 meters remaining, Barega was in sixth place, trailing leader Rodgers Kwemoi of Kenya, among others. Kwemoi faded down the stretch and placed seventh (27:50.06).

At the same time, Barega displayed abundant energy en route to the finish line ahead of the Ugandan challengers, running the final lap in 53 seconds. Sprinting at full speed, Barega took the lead with 400 meters remaining.

Ethiopia’s Berihu Aregawi finished fourth in 27:46.16 and Grant Fisher of the United States placed fifth (27:46.39). Another Ugandan, Stephen Kissa, who led at the 4,000-meter mark, pulled out of the race after 6,000 meters due to apparent exhaustion.

“Even in the future, I want to make history like my previous colleagues,” Barega said through a translator, according to The Associated Press. “I’m also very hopeful to achieve more in this Olympics.”

Barega will seek to win his second gold in Tokyo in the men’s 5,000 meters. The first round of qualifying is set for Tuesday, August 3.

After Great Britain’s Mo Farah captured the 10,000-meter title at the 2012 London Games and 2016 Rio de Janeiro Olympics, Barega delivered a reason for national celebrations in Ethiopia with the latest title in the race for his homeland. Compatriot Kenenisa Bekele won a pair of Olympic golds in the 10,000, in Athens in 2004 and Beijing in 2008.

American Billy Mills, who won the 10,000 meters at the 1964 Tokyo Games, posted a message on his Facebook account after watching Friday’s race at his home in California.