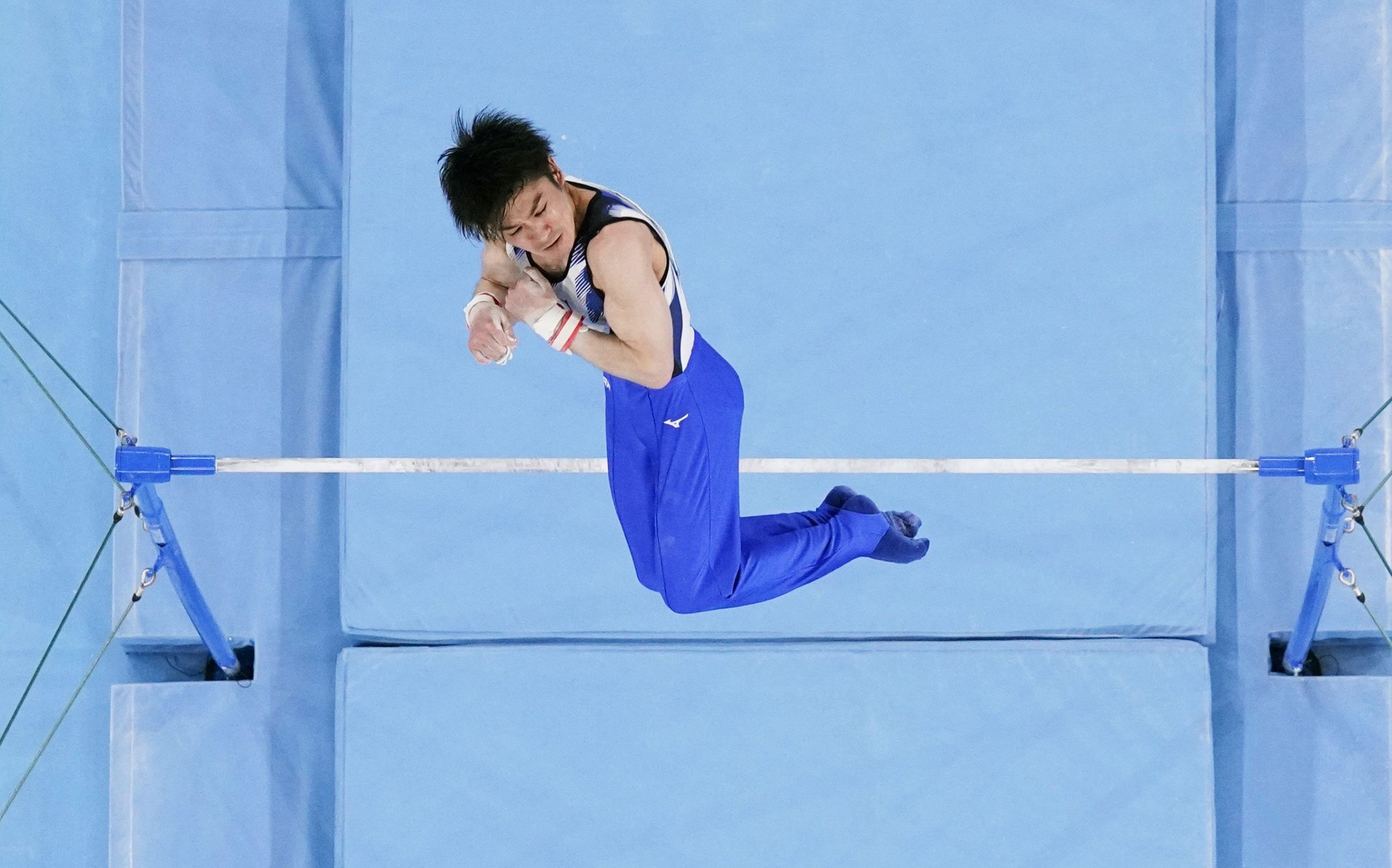 Kohei Uchimura in action on July 24 at Ariake Gymnastics Centre.

“King Kohei” stumbled off the bar while performing a pirouetting component of his routine.

The slip-up contributed to the 32-year-old’s low score (138.66), which put him in 16th place before the day’s qualification rounds were completed.

Only the top eight advance to the final round on Tuesday, August 3 at Ariake Gymnastics Centre.

"I couldn't execute what I have practiced. That's how I simply think," Uchimura told Kyodo News. "In the last three Olympic Games, I could put into action what I practiced. But I couldn't do that at these Olympics."

"I hit my peak already. It has been so tough to get selected as a national team member. That in itself was already really tough," he added.

Uchimura, who captured back-to-back gold medals in the men’s all-around event at the 2012 London Games and 2016 Rio Games, had said in the past that he would not have continued competing if the Olympics were not being held in Tokyo.

He refused to be drawn on whether his competition on Saturday was his last, saying he will need to think about that later.

"I have experienced the low of lows when I wasn't doing well. So I am not as disappointed as I expected," he said.

Uchimura, who many experts consider the greatest male gymnast of all time, made his Olympic debut at the 2008 Beijing Games and helped Japan earn the silver in the men’s team competition. He also collected a runner-up medal in the individual all-around event.

Japan entered the Tokyo Games as the defending men’s champion. Uchimura wasn’t selected to be in the team event this time, though.

Preparing to compete in his fourth Olympiad, Uchimura, who has dealt with physical ailments and injuries in recent years, kept his focus on the horizontal bar. He previously announced this will be his final Olympics.

Uchimura is a six-time all-around world champion, with his first world title in London in 2009, followed by five consecutive crowns through 2015 in Glasgow.

In men’s team qualifying, Reigning Olympic men’s team champion Japan amassed 262.251 points, followed by rival China with 262.061 after the second of three subdivision qualifying sessions had ended in the afternoon. By that point, eight teams had competed, with four more to perform in the evening.

The top eight advance to the final on Monday, July 26, starting at 7 p.m.

First Match Canceled Due to a Positive COVID-19 Test

The tournament at Shiokaze Park opened with a default victory (2-0) for Japan’s Megumi Murakami and Miki Ishii after their Czech Republic didn’t participate.

Marketa Slukova, who received a positive COVID test this week, became ineligible to play, and. Slukova’s partner Barbora Hermannova was left disappointed by having to forfeit the match.

Three Czech Olympians have tested positive for the coronavirus this week in Japan. A men’s beach volleyball player Ondrej Perusic is also on the list.

Richard Carapaz outclassed 129 other cyclists to finish in first place in the men’s road racing event. He held a 40-second lead with one kilometer remaining and held on to claim the gold medal at Fuji International Speedway in Shizuoka Prefecture.

The 28-year-old Carapaz, who was third in the recent Tour de France, completed the 234-km journey in 6 hours, 5 minutes, 26 seconds.

Cyclingnews.com described the Ecuadorean’s winning strategy this way: "Carapaz made his first acceleration with 25 km to go in response to a move from Brandon McNulty (USA) before dropping his breakaway companion and soloing to the win with 5.8 km to go.”

Japanese duo Jun Mizutani and Mima Ito beat Austria’s Stefan Fegerl and Sofia Polcanova, four games to one in the round of 16 at Tokyo Metropolitan Gymnasium.

"It was crucial that we got off on the right foot, having waited so long for the Olympics,” Mizutani was quoted as saying by Kyodo News.

Other table tennis events in the preliminary and first rounds for the women’s and men’s singles competitions.

She then teamed up with compatriot Makoto Ninomiya for a mixed-doubles clash with women’s world No. 1 Ash Barty and Storm Sanders of Australia.

Temperatures soared to 34 C (93 F) at the tennis complex on a humid day.

Despite the uncomfortable heat, Russian Anastasia Pavlyuchenkova made quick work of Italy’s Sara Errani, winning 6-0, 6-1, then spoke about the on-court conditions.

“You’re just not feeling great,” the 2021 French Open women’s singles runner-up said, according to The Associated Press. “So I wasn’t enjoying it at all.”

The fast-paced nature of the game, in which shots travel as fast as 70 kph, was clear in the match between the United States and Japan in the women’s preliminary round of Group B.

The final score of 25-4, broke several Olympic records: highest number of goals in a match, most goals in the first half (14) and biggest margin of victory. Team captain Maggie Steffens and two-time Olympic medalist Stephania Haralabidis scored five goals apiece.

Despite the setback, Japan had its scoring chances, but U.S. goalie Ashleigh Johnson blocked 15 out of Japan’s 19 shots.

“We wanted to do more counterattacks, but it was a match where a lot of issues were uncovered,” said Japanese player Miku Koide, according to NHK.

Japan next faces China on July 28.

“Winning against China in the next match is one of our objectives for this Olympics, so we want to absolutely win, and bring some energy for our Japanese fans,” Koide said, looking ahead.

In the afternoon, the Australia women’s team defeated Canada 8-5.

This was a tricky opponent for Canada, as Australia’s team, known as “Aussie Stingers,” has a strong track record, having won three gold medals since the sport was first introduced in the women's category at the 2000 Sydney Olympics. Yet Canada’s team, which qualified for the Olympics for the first time since 2004, faced the challenge head-on and brought energy to the pool.

After the first quarter ended at 1-1, Australia took the lead in the second quarter at 5-3, then extended it to 7-4 by the end of the third.

It was a disappointing competition for Hiromi Miyake, who was aiming for the podium in the women’s 49-kg category.

She successfully performed a 74-kg snatch on her first try, but Miyake later failed three times to complete a 99-kg clean and jerk, resulting in her elimination from medal contention in the final round. China’s Hou Zhihui, 24, received the gold medal after lifting 116 kg and receiving 210 points.

Miyake shortly afterward announced her will to retire.

The 35-year-old from Saitama had won a silver medal at the 2012 London Games, then took home bronze four years later from Rio de Janeiro.

“If it were up to me, I would compete in the Olympics forever. But one has to take heed of the limits of one’s body,” said Miyake to Kyodo News.

The weightlifter has participated in five consecutive Summer Olympics over a period of 21 years, the most by a Japanese female athlete.

Okazawa Off To a Winning Start, Irie Also Advances

Japanese welterweight Sewon Okazawa beat India’s Vikas Krishan by unanimous decision in his round of 32 bout.

Okazawa went on the attack from the outset in their bout at Ryogoku Kokugikan and outscored Krishan on all five judges’ scorecards.

The 25-year-old opened a cut over Krishan’s left eye midway through the second round. In between the second and third rounds, Krishan’s corner could be heard urging their boxer to go for the knockout.

But Okazawa held his ground and advanced to the round of 16 where he will face Cuba’s Roniel Iglesias on Tuesday, July 27.

Born in Yamagata Prefecture to a Japanese mother and Ghanian father, Okazawa has a record of 16 wins and three losses and is one of Japan’s top medal hopes in boxing.

Okazawa began his boxing career at the age of 16 in 2011 and claimed his first Japanese national title in 2018.

In a women’s featherweight bout, Japan’s Sena Irie beat El Salvador’s Yamileth Solarzano by unanimous decision. She will face Tunisia’s Khouloud Hlimi Ep Moulahi in her next bout on Monday.

The boxing tournament at the 2020 Games will be the most gender-equal competition ever with two extra women’s weight divisions added to the program allowing 100 women to compete in Tokyo.

Daiya Seto, one of the top medal favorites for the men’s 400-meter individual medley, finished in ninth place in his heat at Tokyo Aquatics Centre.

As a result, the reigning world champion in the event failed to qualify for the eight-man final on Sunday, July 25.

The 27-year-old Seto finished the race in 4 minutes, 10.52 seconds, nearly 5 seconds slower than his personal best in the race.

“Even in the last hundred, I didn’t let it all out,” Seto said, according to The Associated Press. “Even when the other swimmers were coming near me.”

He added: “Five years ago, I went too fast in the prelims and I couldn’t go fast enough in the finals. I tried to avoid that.”

Seto has been one of the premier 400 IM swimmers of the past decade, collecting three world titles plus the bronze at the Rio Games.

Japan returned to the men’s Olympic handball tournament for the first time since 1988, but was no match for Denmark, the 2019 world champion.

Jacob Holm and Magnus Saugstrup scored nine goals each to lead Denmark to a comfortable 47-30 win over Group B foe Japan at Yoyogi National Stadium.

Denmark won the gold medal at the Rio Games and is one of the favorites to claim top honors in Tokyo.

Up next: Japan meets Canada on Monday, July 26.

"It was my first game of the tournament so there were a few nerves but I think I played well and am glad to get the win,” Yamaguchi said after the match, according to Kyodo News.

In mixed doubles, Yuta Watanabe and Arisa Higashino had a positive start for Japan early in the day, beating Denmark’s Mathias Christiansen and Alexandra Boje 20-22, 21-11, 21-15.

Mayu Matsumoto and Wakana Nagahara, in the women's doubles event, also played strongly, beating out the Egyptian team two games to none, 21-7, 21-3.

All events were in the group play stage at the Musashino Forest Sport Plaza.

Yu Yamamoto and Yamato Fujita both homered as Japan beat Italy 5-0 to improve to 3-0 in the softball tournament.

Yamamoto hit a two-run homer in the fourth inning at Yokohama Stadium and Fujita connected for a three-run blast in the sixth for her third straight game with a home run.

Miu Goto picked up the win after giving up one hit and striking out nine batters over five scoreless innings.

Japan won the gold medal the last time softball was on the Olympic program in 2008 in Beijing.

In the Olympic debut of halfcourt basketball, the Japan’s women's national team participated in the first game of the morning and dropped a 21-18 decision to Russia.

Olga Frolkina was the high scorer (seven points) for Russia, while Anastasiia Logunova finished with six.

Later in the day, Japan bounced back with a 20-8 victory over Romania. Mawuli led all players with nine points.

Men's 3x3 action also got underway on the same day.