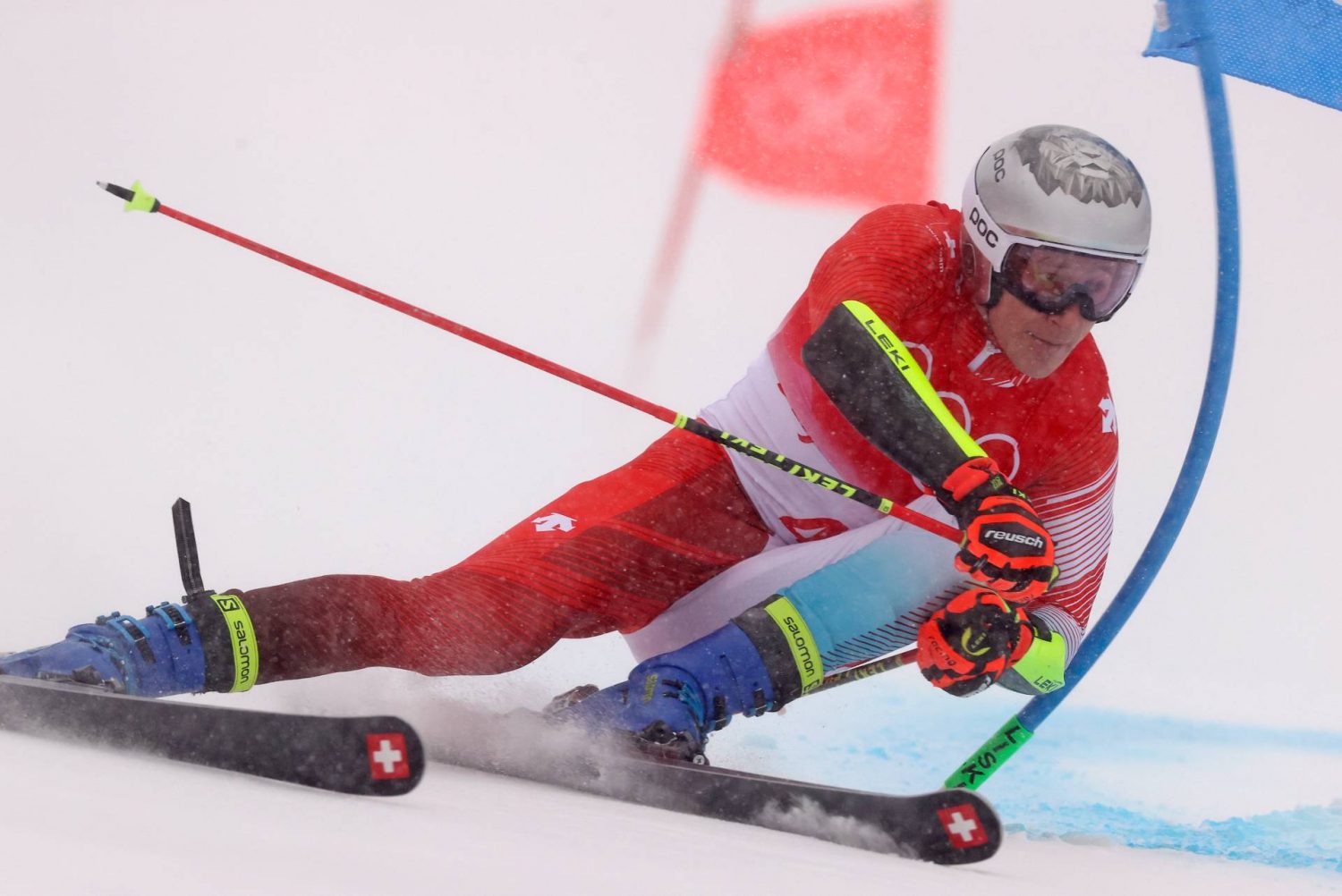 Switzerland's Marco Odermatt skis to the gold medal in the men's giant slalom at the Beijing Olympics on February 13. (Alessandro Trovati/AP)

France’s Mathieu Faivre took home the bronze with an aggregate time of 2:10.69.

Odermatt placed seventh in the men’s downhill earlier in the Beijing Games and did not finish in the Super-G event.

Sunday’s giant slalom was impacted by snowfall and limited visibility, forcing a delay of more than one hour for the second run.

But Odermatt was solid on his second trip down the Yanqing course to lock up the win.

“I really risked everything in the second run because I wanted not just the medal, I wanted the gold medal,” Odermatt was quoted as saying by The Associated Press. ”It’s difficult because you can lose everything but today it paid off.”

He added: “It was a hard day, with the conditions, with such a long wait between the two runs. It was more than five hours for me, it was such a long time to re-think everything and it was hard to stay focused. I tried to sleep some minutes in between.

The team representing the Russian Olympic Committee built up a big lead in the first half of the race en route to winning the men’s 4×10-kilometer cross-country skiing event at the Beijing Olympics, while Japan finished 10th for its best finish since the Nagano Olympics.

Russian anchor Sergey Ustiugov crossed the finish line on Sunday, February 13 at the National Cross-Country Skiing Center in Zhangjiakou in a time of 1 hour, 54 minutes, 50.7 seconds.

Norway took the silver more than a minute and seven seconds behind, while France claimed the bronze after Sweden faded away over the closing kilometers.

On a day when high winds and snow flurries made visibility difficult at times, organizers were forced to turn on the floodlights so that fans and television viewers could see the action.

In the men’s 4×10 event, the first two skiers on each team use a classic style with the second two racers using freestyle, each for three laps of 3.3 kilometers.

As their women did in winning the 4×5-km relay on Saturday, Russia’s men got off to a strong start with lead man Alexey Chervotkin building up a lead of more than 12 seconds midway through his leg.

When he handed over to Alexander Bolshunov, winner of gold in last week’s skiathlon, the race was all but decided.

With Ustiugov firmly in control during the final leg, the focus shifted to the battle for the silver and bronze.

Norway’s Johannes Klaedo and France’s Maurice Manificat skied most of the final leg neck and neck with the Norwegian surging ahead down the stretch.

The Japanese team of Ryo Hirose, Hiroyuki Miyazawa, Naoto Baba and Haruki Yamashita battled with the United States and Canada, eventually finishing 10th, behind the US but ahead of the Canadians.

Japan finished 16th at the Sochi Olympics and seventh at the Nagano Games in 1998. Japan’s best previous finish since Nagano was 12th in Salt Lake City in 2002.

Cross-country skiing was one of the founding events at the first Winter Games in Chamonix in 1924. Women’s events were not added until Oslo in 1952.

The International Ski Federation (FIS) designates spots based on point totals that athletes accumulate in the FIS competition during the Olympic qualification period.

Norway has dominated the sport over the years, winning 49 gold medals that have been awarded since 1924, far more than any other country.

In the first Winter Games to feature women’s monobob, which is one-woman bobsledding with a smaller sleigh than the ones used in two-man and four-man competitions, American Kaillie Humphries had the fastest time in the first heat on Sunday morning at Yanqing National Sliding Centre.

Later in the day, Humpries maintained her top spot after the second run with an accrued time of 2:09.10. She reached a top speed of  123.30 kph, a Yanqing track record, during her first run.

Canada’s Christine de Bruin sits in second place at the midway point of the competition with an overall time of 2:10.14.

Two more runs will be held on Monday on the 1.9-km course to determine the final results.

Humphries was pleased with her performance on Sunday, but quickly shifted her focus to the final two heats.

“You pretend like today didn’t exist and have a fresh race tomorrow,” Humphries told reporters. “Easier said than done, I can promise you that. But at the end of the day, I’ve had practice at doing it. And I’ve won, and I’ve lost in this position. And tomorrow is a brand new day. … I have to continue to put my best foot forward.”