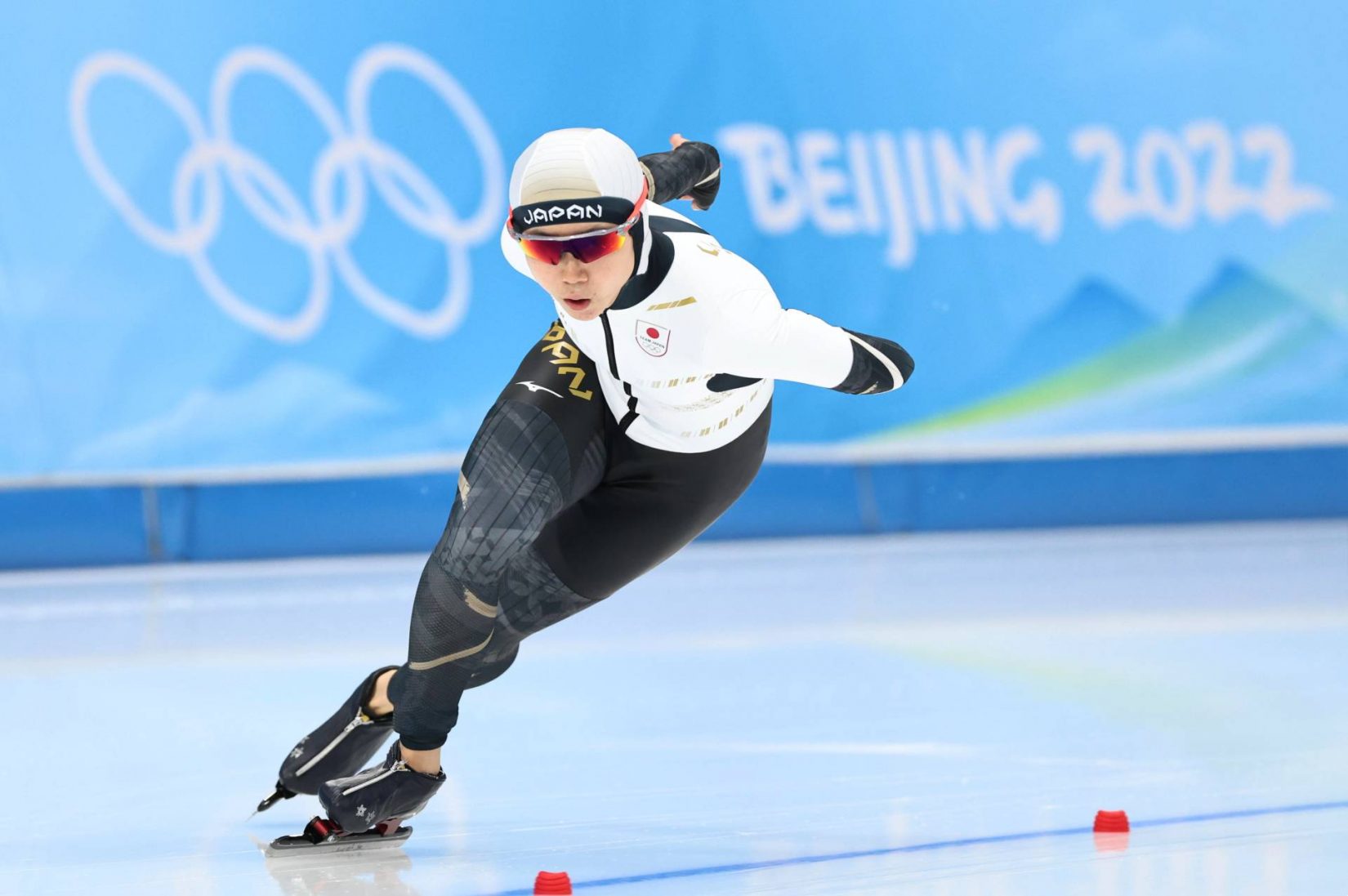 Speed skater Miho Takagi races en route to a silver-medal finish in the women's 500 meters at the Beijing Olympics at the National Speed Skating Oval on February 13. (ⒸSANKEI)

American Erin Jackson, who finished 24th in the race at the 2018 Pyeongchang Games, claimed the gold medal with a time of 37.04 seconds at the National Speed Skating Oval. Jackson is the first Black woman to capture a gold medal in Olympic speed skating.

Japan’s Miho Takagi earned her second silver medal in Beijing after placing second in the 1,500 on February 7, clocking 37.12. The Russian Olympic Committee’s Angelina Golikova snatched the bronze in 37.21.

Japan’s Nao Kodaira, the reigning Olympic women’s 500-meter speed skating champion, got off to a slow start in the 10th of 15 pairings and trailed by a wide margin for large stretches of her race against Golikova, with the former reaching that early part of the race in 10.72 seconds and the latter in 10.37.

Kodaira looked to have had a bad start and kept it up throughout. She placed 17th in 38.09.

Takagi was delighted by the outcome.

"I was able to race with [my full] body," Takagi told NHK after the race.

"I was happy that I was able to put out my best and I was able to race myself in the midst of difficult times,” the 27-year-old added. “Now, honestly, I am full of surprises."

Reflecting on her Olympic experience in Beijing, Takagi revealed that she had considered skipping the 500 after placing second in the 1,500. She also finished sixth in the 3,000 on February 5.

"In this Olympics, with my hard schedule, with one thing piled on top of another, to skate my career-best 500 meters, I was really happy," Takagi said. "I'm frankly astonished right now that I was able to get a medal."

Takagi will next prepare for the women’s team pursuit semifinals and final on Tuesday, February 15, buoyed by positive vibes. Japan is the reigning Olympic team pursuit champion.

"When the 1,500 was done, I had the team pursuit on my mind, and the amazing thing is that I was seriously considering whether to skate the 500 or not," Takagi told reporters, according to Kyodo News. "But now at the end, I'm glad I gave it a shot."

Takagi will also compete in the 1,000 on Thursday, February 17. She claimed bronze in the event in Pyeongchang, where Kodaira was the runner-up.

Additional Details from the Women’s 500

In the run-up to her title defense at the venue dubbed “The Ice Ribbon,” Kodaira insisted she was on a mission and wasn’t satisfied to just be an Olympian again.

“I don’t intend just to show up. I want to blow people away with my performance,” Kodaira was quoted as saying by Kyodo News earlier in the week.

She faced a formidable opponent. Golikova was seventh in the event at the 2018 Pyeongchang Games and 18th in 2014 in Sochi, Russia.

The 35-year-old Kodaira arrived in the Chinese capital with the Olympic record on her CV, a time of 36.94 seconds set at the Pyeongchang Games. In South Korea, Kodaira was also the runner-up in the 1,000.

She made her Olympic debut at the 2010 Vancouver Games and helped Japan claim the silver in the team pursuit event.

Takagi, the nation’s Olympic delegation flagbearer at the Opening Ceremony on February 4, was in the fourth pairing against Austria’s Vanessa Herzog.

Skating from the outer lane, Takagi took the early lead upon completion of her race, finishing in 37.12 seconds. Herzog reached the finish line in 37.28.

With her time visible on a screen inside the arena, Takagi smiled and raised her right arm in a euphoric motion, displaying her pleasure in the result.

Making her third Olympic appearance, Herzog placed 27th in the 500 at the 2014 Sochi Games. She was fourth four years ago in Pyeongchang.