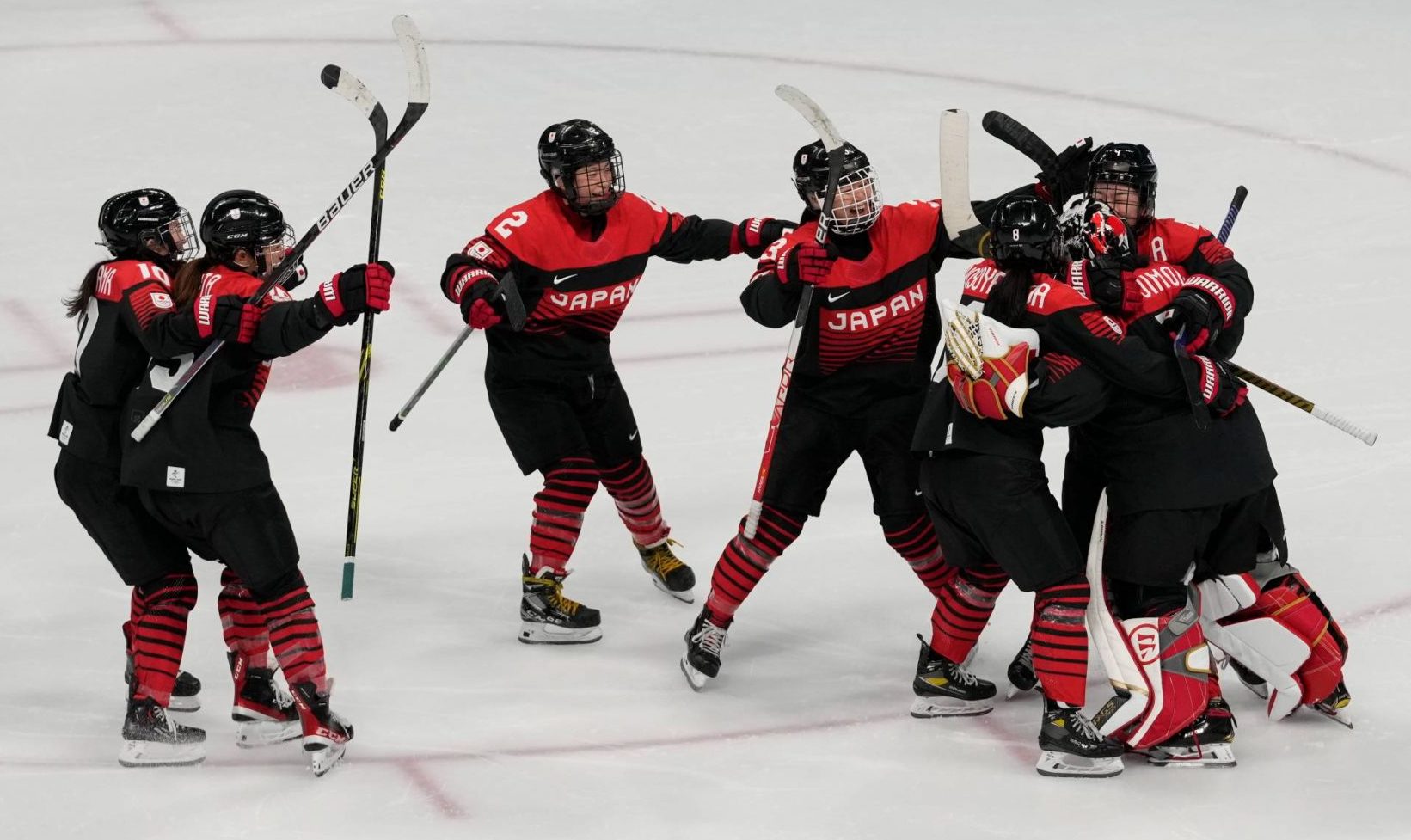 Japan players celebrate after beating the Czech Republic in a penalty shootout in a Group B preliminary round match at the Beijing Olympics on February 8. (Petr David Josek/AP)

Haruka Toko scored a pair of goals in regulation in Smile Japan’s 3-2 penalty shootout victory over the Czech Republic in the teams’ final Group B preliminary round match at the Beijing Winter Olympics on Tuesday, February 8.

The winning tally came from Hanae Kubo in the penalty shootout after both teams failed to score in the three-on-three 5-minute overtime period.

It was a dramatic tally.

Kubo’s attempt, Japan’s second, was initially stopped by the Czech Republic’s Klara Peslarova, but the puck ricocheted off the goalie’s leg pad and moved just beyond the goal line.

Each team had five players take a shot apiece in the shootout. Japan, which lost 2-1 in a penalty shootout to China on Sunday, had the first shot and alternated with the Czechs.

After Czech captain Mills took the final shot and Japan goaltender Nana Fujimoto stopped it, a euphoric celebration on the Smile Japan bench spilled over to the ice.

Fujimoto made a number of difficult saves in the game. She finished with 36 saves.

The 32-year-old Fujimoto, who also competed at the past two Winter Olympics, stood tall in overtime and the shootout, poking away the puck and exhibiting quick reflexes with the game on the line.

“She did a great job today and she helped our team a lot,” Toko said of Fujimoto, speaking to reporters after the match. “Especially in the penalty shootout. She was perfect and we are so fortunate to have her.”

The Czechs trailed twice. They evened the score 1-1 in the second period (Krizova at the 6:09 mark) and 2-2 in the third (Natalie Mlynkova 5:53 into the period) at Wukesong Sports Centre in Beijing.

In between, Haruka Toko, whose first shot in a wild sequence bounced off the goalpost, made it 2-1 on a 5-on-3 power-play goal 23 seconds into the third period, with Kubo and Ayako Toko, Haruka’s older sister, assisting on the play.

Reflecting on her second goal, the younger Toko said: “We absolutely needed a goal there and I was so happy to score it.”

Toko scored the opening 4 minutes into the game, a power-play tally 26 seconds after Mrazova was sent to the penalty box for interference. Japan was aggressive in front of the net and got several pokes at the puck in quick succession with Kubo scoring on a nifty wrist shot beyond the reach of Peslarova. Aoi Shiga and Ayaka Toko had assists on the goal.

Up next: Japan, which went 3-1 in Group B play, awaits the TBD third-place squad from Group A in the 10-nation tournament’s quarterfinals. The Czech Republic is set to face reigning Olympic champion United States, which placed second in Group A.

“We’ve never played the US and it’s going to be a challenge, but we’ve got to stick to our playbook,” Mills told reporters. “I think that’s our only chance to put up a fight against them.”

Smile Japan, making its third consecutive Olympic women’s hockey tournament appearance, will appear in the quarterfinals for the first time.

Iizuka is relieved Japan doesn’t have to face powerhouse teams Canada, the Group A winner, or the US in the quarterfinals.

“The fact that we don’t have to play Canada or the USA is a big accomplishment for our team,” Iizuka said in a post-match news conference.

The Czechs, meanwhile, will look to regroup and have a better offensive performance in their next game.

“The effort was there, for sure, but we still struggled with the finish, with the killer instinct,” Pacina commented after the shootout. “The Japanese were tired today and we weren’t. We had lots of energy but were just not loose enough. Other teams score so easily, but we struggle so hard to score.”

Twenty years after making her Olympic debut at the Salt Lake City Games, Takeuchi, a Sapparo native, had enough speed and endurance in the qualification and elimination runs to book a spot in the round of eight.

In the qualification round, Takeuchi was clocked in 43.51 seconds, while Miki’s time was 42.63.

She met her match, though, in a duel with Ramona Theresia Hofmeister of Germany. Hofmeister moved on to the next round, while the 38-year-old Takeuchi didn’t complete the race.

Takeuchi’s longevity in the sport has produced a number of notable accomplishments, including becoming the first Japanese female snowboarder to earn an Olympic medal (runner-up in the event at the 2014 Sochi Games). She was fifth in 2018.

What’s more, Takeuchi is the only snowboarder at the Beijing Games making their sixth consecutive Olympic appearance.

Before the Olympics Takeuchi admitted that she was “much better mentally and [more] mentally fulfilled than when she was in Pyeongchang,” according to Sports Hochi.

Miki, who is from Hakuba, Nagano Prefecture, had a season-best performance of fourth place at a World Cup event in Carezza, Italy, in December.

She has been snowboarding since she was 4 years old. To say she is passionate about the sport, is a giant understatement.

“I have had two goals since I was in the third year of elementary school, which is ‘becoming the world’s best player in the Alpine snowboarding race’ and ‘winning the Winter Olympics,’ ” Miki said, according to an athlete profile on a sponsor’s websites.

In Tuesday’s quarterfinals, Miki took a step closer to her later goal, but exited the competition after losing her balance and tumbling near the outset of her race.

Norway’s Kjeld Nuis had the biggest highlight of the evening in the men’s 1,500-meter competition on Tuesday.

Not only did Nuis have the fastest time in the 30-man event (15 pairings), he also set an Olympic record in the process at the National Speed Skating Oval.

The 32-year-old Dutchman, who defended his 2018 Pyeongchang Games title, established the record in 1 minute, 43.21 seconds.