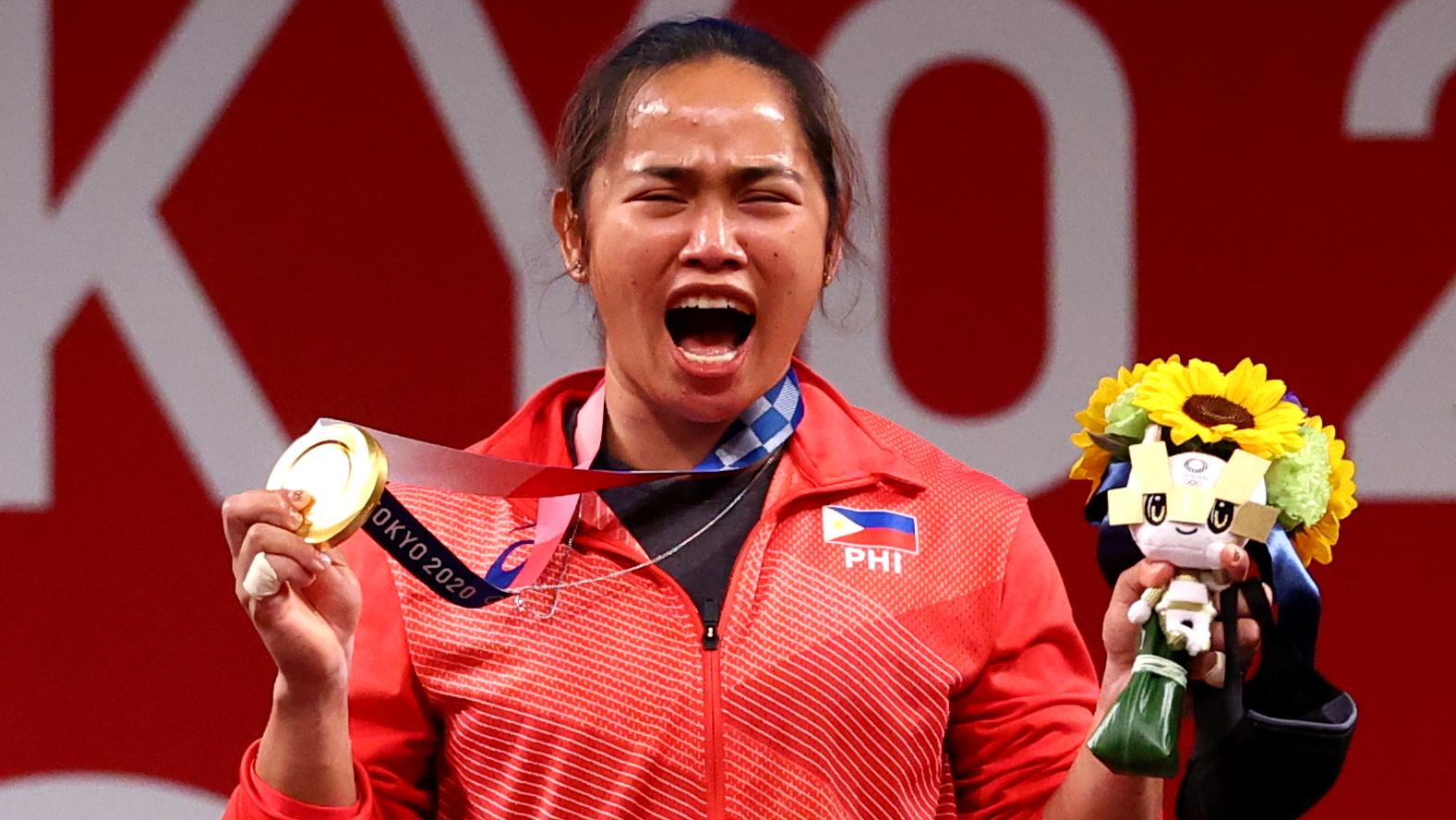 The Philippines made its debut in the Olympics 97 years ago. And while the country has collected several medals over the years, gold was always out of reach, until Monday, July 26.

That’s when Hidilyn Diaz beat the competition in the women’s final of the 55-kg weightlifting competition at the Tokyo International Forum, and snatched her country’s first gold medal.

Finishing the snatch lift with 97 kg, Diaz went toe-to-toe for the gold in the clean and jerk round against world-record holder Liao Qiuyun of China.

Liao upped the ante with a lift of 126 kg on her final clean and jerk attempt to take the lead with a total of 223 kg, but Diaz did not want to settle for silver just like she did in the 2016 Rio de Janeiro Games.

With nothing to lose, the Filipino athlete attempted and cleared an Olympic record of 127 kg on her final clean and jerk try as she captured the gold with a total score of 224 kg, which is also an Olympic record.

“To be honest, I was nervous thinking that I would not be able to do it. But for the whole day, the whole week, I told myself, ‘I believe, I believe.’ I was prepared today,” Diaz told Manila’s Cignal TV after the final.

Diaz revealed later in a press conference that she had never lifted 127 kg before, and thought that she wouldn’t be able to do it, let alone in an Olympic setting.

While her feat might come as a triumph in any country around the world, this was especially true in the Philippines. This was made immediately apparent in the country’s political context.

The President’s speech was quickly outshone by Diaz. Social media erupted in celebration. News sites’ traffic shot up. Filipinos were crying, hearing their national anthem played at the Olympics for the first time.

That she stole the thunder from Duterte was in some ways sweet, albeit unintended, revenge. In 2019 — at a time when Diaz was already a SEA Games, Asian Games, and Olympic medalist, and was training for Tokyo — officials in the Duterte government came out with a “matrix” showing a supposed network of conspirators plotting to destabilize the government and oust the president.

The matrix included media such as Rappler and individuals, such as Hidilyn Diaz. What might sound like a mere rumor gave the athlete and her family reason to be afraid, because appearing on such a list ー even if due to baseless suspicions ー has historically led to reprisals, courtesy of de-facto vigilantes.

Diaz comes from a very poor family in the southern Philippines, and is the pride of Zamboanga City. Her father is a farmer who has also ferried passengers on a tricycle to earn a living. He now raises hogs. Diaz as an 8-year-old used to fetch pails of water from the village well because many houses didn’t have their own water supply.

She’s 30 now. Tokyo is her fourth Olympics. The first time she competed, in Beijing in 2008, she was the youngest weightlifter — she was 17.

Her Tokyo medal also made her the first Filipina double Olympic medalist. She won her first medal, a silver, at the 2016 Rio Olympics. Even with that, she had already made history as one of only three Filipinos in history to capture an Olympic silver.

Diaz is set to come back to her home country on Wednesday, July 28, given the strict rules of the Tokyo Olympics that athletes need to leave 48 hours after their competition ends.

When she returns, undoubtedly a hero’s welcome awaits her. Together with her Olympic prize, she is also set to be showered with prizes and accolades at home. These include P38 million PHP (just over $750,000 USD) in cash incentives from the government ー they are mandated by law ー and additional pledges from businessmen.

Diaz is also expected to receive two houses, a condominium lot, lifetime of free flights from at least two airlines, and a medal of honor. As she is currently a sergeant with the Philippine Air Force’s Civil Military Operations Group, some netizens are also suggesting that she should be promoted in the military.

With so much debate over the Olympics, Hidilyn Diaz is a sweet reminder of how sport can make us come together.

A Historical Moment for Taiwan, Japan As Well

Women have shone in other weightlifting competitions as well, including the 59-kg category on Tuesday, July 27, the day following Diaz’s gold-medal achievement.

Kuo finished sixth in London in 2012, and then earned a bronze medal in Rio in 2016, so for her the path to gold hasn’t been easy.

“From 2012, that failure, to now, this gold medal. I finally won a gold medal. I am really excited,” she said. “It’s what I dreamed of and I’m really grateful for all those people who’ve been with me.”

Kuo was joined on the podium by Polina Guryeva of Turkmenistan (217 kg), who claimed her nation’s first-ever Olympic medal, silver, with her runner-up finish.

“Two years ago, I didn’t even think about this,” said the 21-year-old in the final, “My coach gave me hope. He guided me, he motivated me, and pushed me for victory.”

Last but not least, Japan’s Mikiko Andoh (214 kg) clinched an emotional bronze medal. The 28-year-old Ichinomiya, Chiba Prefecture, native in her second Olympic appearance had suffered knee pain with her 120-kg clean and jerk attempt. It was only Venezuelan Yusleidy Mariana Figueroa Roldan’s failed attempt that cleared the path for Andoh to win third place on the podium.

“I am in shock,” she commented immediately upon hearing the result. Upon reflection, Andoh later told NHK modestly, “The weight I lifted was less than what I did in Rio, but because I managed to achieve a medal I want to take this as a satisfactory result. Looking to Paris [2024] I want to train and work hard in order to perform with an even better result.”