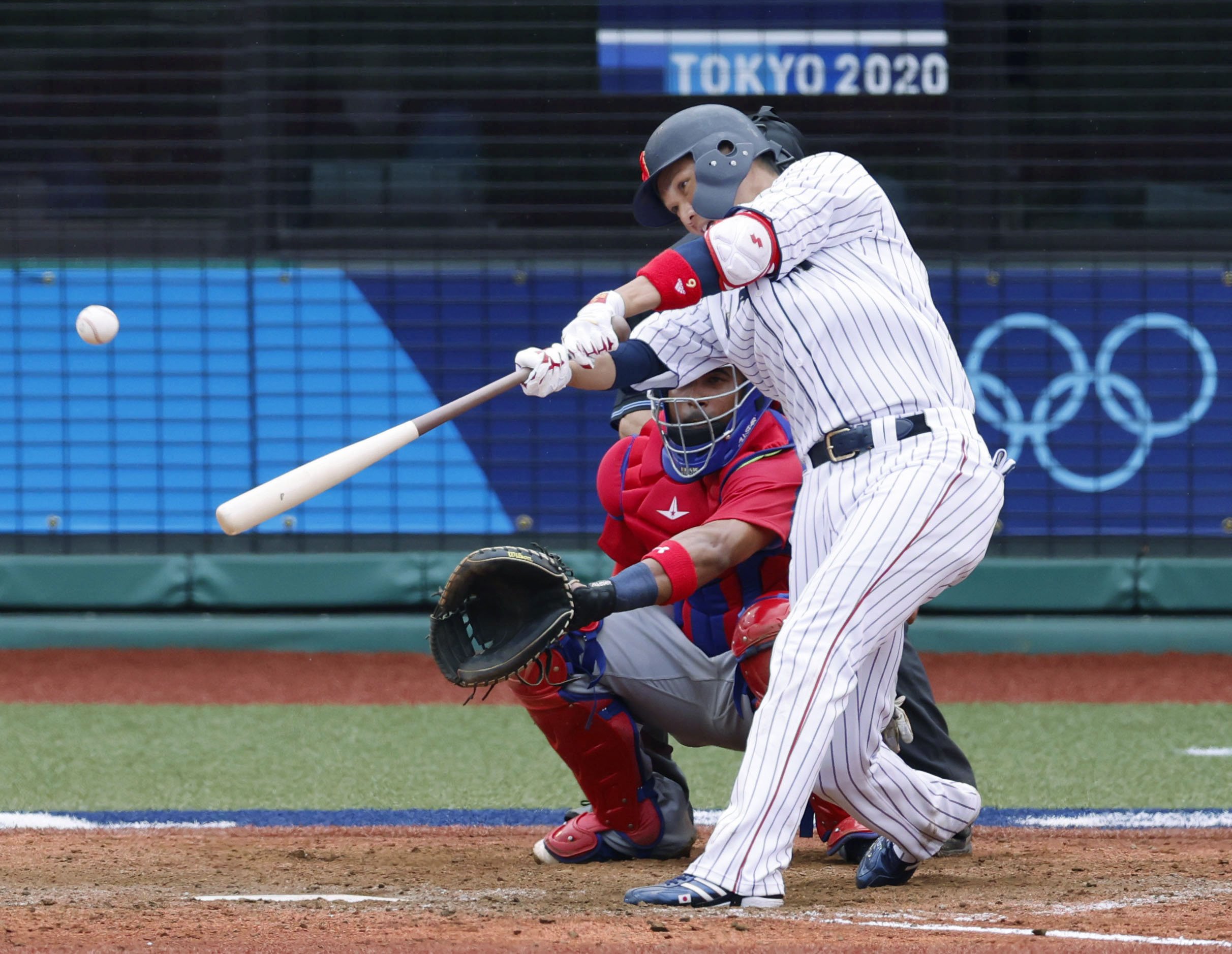 Japan's Hayato Sakamoto hits a walk-off single in the ninth inning against the Dominican Republic at Fukushima Azuma Baseball Stadium on July 28.

Hayato Sakamoto hit a bases-loaded single to center as Japan rallied for three runs in the bottom of the ninth inning to beat the Dominican Republic 4-3 in the opening game of the Olympic baseball tournament.

Leading 3-1 at Fukushima Azuma Baseball Stadium, it looked like the Dominican Republic was set to upset Japan in the opener on Wednesday, July 28, but the hosts had other ideas.

With runners on first and second, Munetaka Murakami started the rally with a single to right that scored Yuki Yanagita from second.

“It was a situation in which I had to deliver,” Kai said of his perfectly executed bunt. “I wanted to get that run in no matter what and was happy I could come through.”

Tetsuto Yamada singled to load the bases and set the table for Sakamoto’s dramatic walk-off hit.

“It was a huge relief to get out first win today,” Sakamoto said. “I think there were a lot of nerves in the first half of there game when there was a heavy atmosphere.”

For the longest time it looked like Dominican starter Cristopher Mercedes, who pitches for the Yomiuri Giants of Nippon Professional Baseball, would be the hero of Wednesday’s game.

Mercedes, who is 5-1 this season for Yomiuri with 30 strikeouts and a 2.31 ERA in 14 games, silenced Japan’s batters through the first six innings, giving up one run on three hits while striking out seven.

But the Dominican bullpen couldn’t hold the lead and reliever Jairo Asencio, who took the mound in the ninth, surrendered three runs to take the loss.

After a shaky first inning in which he hit former Toronto Blue Jays slugger Jose Batista with a pitch, Japan starter Yoshinobu Yamamoto settled down nicely and went six scoreless innings while giving up just one hit, striking out nine and walking one batter.

Koyo Aoyagi replaced Yamamoto after six and immediately got into trouble in the seventh, giving up base hits to Juan Francisco and Erick Mejia.

Japan got a run back in the bottom of the seventh to make it 2-1 when Murakami grounded out to first, scoring Hideto Asamura from third.

Japan had a golden opportunity to tie the game in the eighth. With one out and Yamada on second, Masataka Yoshida singled to left field.

Yamada attempted to score from second but was tagged out on a close play at the plate. Japan manager Atsunori Inaba called for a video review of the play but the umpires did not overturn the call.

With one out, it was a risky move by Yamada who was waved home by the third base coach and could have cost Japan the game.

The Dominican Republic added an insurance run in the top of the ninth when Gustavo Nunez doubled to right off Ryoji Kuribayashi to score Mejia from third to make it 3-1. But it wasn’t enough at the end of the day as Japan’s offensive came alive in the bottom half of the inning.

Japan’s next game is against Mexico on Saturday, July 31, in Yokohama.

Japan won the baseball tournament at the 1984 Los Angeles Games when the sport was not part of the official Olympic program and has since taken bronze twice in Barcelona and Athens, and silver once in Atlanta.