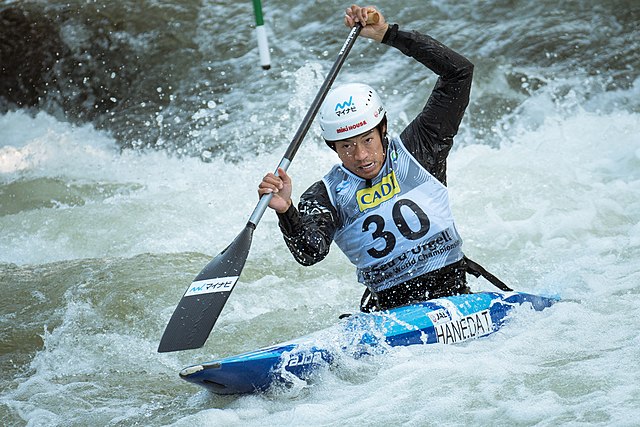 Takuya Haneda was willing to travel halfway around the world to master a sport that was far from mainstream in Japan.

Now the first Japanese and Asian ever to win a medal in Olympic canoeing is looking to repeat that success at the Tokyo Olympics.

The 33-year-old native of Aichi Prefecture captured the bronze medal in the C1 canoe slalom event at the 2016 Olympics in Rio de Janeiro, the culmination of a pursuit that began over two decades ago.

After graduating from high school, Haneda made the decision to move to Slovakia when he was just 18 years old. The move allowed him to hone his skills in a country known for its canoeing prowess while completing his studies at university in Bratislava.


Being more that 8,792 kilometers from home presented numerous challenges, but Haneda knew he had to make the move.

The lack of proper coaching and man-made courses in Japan meant that Haneda would have to go overseas if he was to make sufficient progress in the sport.

“I had no choice but to go,” Haneda told Olympics.com. “In canoeing, just because you have ability doesn’t mean that you will improve.”

In Slovakia, Haneda not only found the proper coaches and courses, but also found that he had a more diverse training regimen that allowed him to become a more complete athlete.

Cross-country skiing, basketball, and soccer all became part of his training program.

“The environment really is that much different,” Haneda said. “That’s why I had to base myself in Slovakia.”

There were other challenges that helped in his development, not only as an athlete, but as a person as well. Haneda had to adjust to a totally different culture.

“There were many difficulties, but I think I was able to develop the strength to overcome them,” Haneda said. “I learned that if you have the desire to win, there is nothing you can’t do.”

Competition at the Tokyo Games

The canoe slalom event at the upcoming Tokyo Games will be held at Kasai Canoe Slalom Center, which was constructed in Tokyo’s Edogawa Ward. It is the type of man-made course that Haneda has always dreamed of having in Japan.

The course requires a high level of skill, but Haneda is confident that he is up to the challenge.

“You don’t use your own strength,” Haneda said. “The secret to canoeing is using the flow of the water to see how fast you can move the canoe down the course. If you train every day, then you will be able to effectively grasp the flow of the water. There are cycles in the water. It bounces off itself, it hits the walls; every instant is different. It is important to develop the ability to read, see and feel those patterns.”

Haneda’s medal in Rio has generated greater interest in the sport in Japan.

“So many people have become interested in canoe slalom since I won that medal,” Haneda said. “They also recognize me, so my desire to meet their expectations has become so much stronger.”

Since the 2016 Rio Games, Haneda has been working on his physical strength. He was unable to achieve a podium finish at the world championships in 2019, but is looking for a boost from the home fans in Tokyo.

“From the standpoint of an athlete, there’s no greater blessing than to compete in an Olympic Games in your own country,” Haneda said. “I feel really lucky to be able to compete on my home turf.”


Canoeing’s Long History in the Olympics

Canoeing has had a long history in the Olympics. Canoe sprint first featured in the 1936 Games in Berlin.

There are now two disciplines in Olympic canoeing: slalom and sprint. Canoe slalom, previously known as whitewater slalom, involves navigating a canoe through a course of hanging downstream or upstream gates in the fastest time possible.

Canoe slalom made its Olympic debut at the 1972 Munich Games. It was dropped from the program after ’72, but returned at the Barcelona Games in 1992 and has been a regular event since then.

Slalom canoeists compete in both kayaks and Canadian canoes.

A record 35 countries will contest the event in Tokyo, with Mexico, Hungary and Taiwan making their debut in the sport.

Slovakia has dominated canoe slalom at the Olympics with eight gold medals, followed by France with seven and Germany with four.

“Through my style of canoeing, I want to show people the excitement of canoe slalom and the passion and dedication I’ve put into it,” Haneda said.