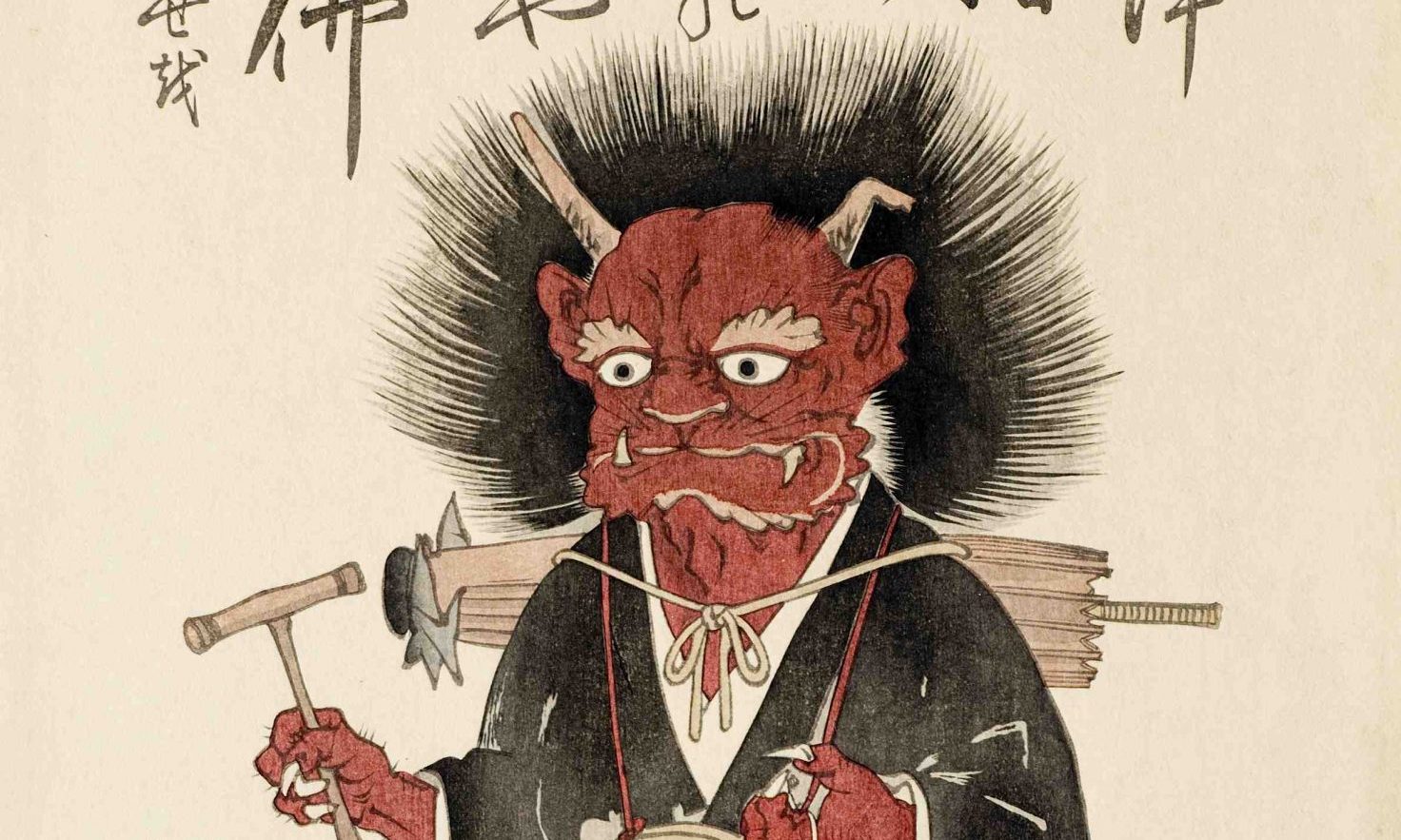 Otsu-e were sold as souvenirs to travels in Otsu (now Shiga prefecture).

Just over a low mountain range from Kyoto lies the city of Otsu, capital of Shiga Prefecture. This laid-back city of roughly 350,000 residents is the main port on Japan’s largest lake, Biwako. Among the nearby attractions are Miidera Temple, the Hiyoshi Taisha shrine and the Enryakuji Temple complex on Mount Hiei—a world heritage site.

Otsu has also seen some important history. It was the imperial capital for a brief period from 667-672 during the Asuka Period, when Japan’s capital was still a moveable feast.

The sleepy community was also the scene of one of the most shocking incidents during the Meiji period. On May 11, 1891, while on a day trip from Kyoto, the Russian crown prince, who was later to become the last Russian czar Nicholas II, was attacked by a Japanese policeman on duty there to guard him and a group of fellow dignitaries. The rogue cop, Sanzo Tsuda by name, slashed Nicholas Alexandrovich across the forehead with his service saber, leaving an unsightly 9-centimeter gash.

The motive of the culprit was never made clear. It was speculated that he was mentally unbalanced or possibly an anti-foreign fanatic. The resulting diplomatic furor was quickly calmed and Tsuda, who had been condemned to life imprisonment, conveniently died of illness in prison the following year.

Earlier, during the Edo period, Otsu thrived as the 53rd post station on the famous Tokaido highway that ran for a bit over 300 miles from Nihonbashi bridge in Edo (now Tokyo) to the Sanjo Ohashi bridge in Kyoto. A constant stream of travelers moved to and fro along the key transport artery.

Then as now, travelers were expected to bring back gifts, or omiyage for friends and family, as well as personal mementos of their trip.

Advent of a Folk Art Form

Since most travelers on the Tokaido walked, they had to carry their necessities on their backs. That ruled out heavy, bulky gift items.

The need for lightweight souvenirs gave birth in the 1620s to the Otsu-e, simple paintings on paper with popular themes. At first most of the paintings seemed to be Buddhist in nature, no doubt partly because the Tokugawa Shogunate was making a ferocious effort to root out Christians. A cheap painting was therefore a wise investment as proof of your Buddhist bona fides.

Later, especially during the prosperous, culturally vibrant Genroku Era (1688-1704), the anonymous artists branched out, creating humorous works depicting oni demons, fashionable beauties, historical heroes and animals of various kinds indulging in human-like foibles. Otsu-e craftsmen were said to be capable of producing on demand paintings on some 120 themes. These spontaneous, throwaway sketches might also be viewed as one ancestor of the modern manga.

Here, I would note that although Otsu-e predated ukiyo-e, which really only started appearing in Edo in the 1670s, and undoubtedly had some influence on the development of the woodblock print tradition, especially in terms of catering to the whims of the public, there was not direct lineage in terms of technique. However, some ukiyo-e artists took to portraying standard Otsu-e characters in their own prints.

Also, as more sophisticated, multi-color woodblock prints became increasingly popular, the demand for Otsu-e declined—although the “Oni no Nembutsu” (“The Demon at Prayer”) apparently remained popular as a sure proof way to silence crying babies.

Although there was a legend that an artist named Matabei produced the first Otsu-e, or that the honor goes to a group of unemployed Buddhist painters who relocated from Kyoto to Oiwake, there is no solid evidence to back up either story.

In any event, Otsu-e production was essentially a cottage industry. Families living in this area along the Tokaido would produce ー to order ー whatever the customer wanted. The content was often satirical or admonitory, skewering human pride and avarice. But the artists remained well aware that it was best not to get uppity and skewer the samurai rulers. Worldly Buddhist priests were a far safer target.

The father might do the design outline in black on plain brown paper, while the mother would fill in the spaces with a limited range of eye-catching colors. The children would wrap up the painting to go. It was the artistic equivalent of modern fast food.

The lack of sophistication and ephemeral nature of these simple prints and the fact that they were not attributed to a given artist no doubt contributed to their failure to gain widespread popularity among collectors, although even in those days there were aficionados.

The famous late 17th century haiku master Basho seems to have had a soft spot in his heart for Otsu-e, even if judging from the following poem the later haiku poet Buson seemed less enamored:

Eventually, a whole range of products, including protective charms (ofuda) and folding screens (byobu) were produced which incorporated Otsue-e motifs.

On to New Artistic Movements

The Tokaido railway line eventually put the Otsu-e artists out of business and many people forgot they had ever existed.

For a long time, Japanese fine art circles refused to consider even ukiyo-e woodblock prints as meriting the title of true art, so you can imagine what they thought of Otsu-e.

However, the mingei movement leader Soetsu Yanagi, and the artists Tessai Tomioka, Zeshin Shibata and Chu Asai treasured them.

Foreigners too became interested in Otsu-e. The German doctor Philipp Franz von Siebold served as the resident physician and scientist at the Dutch East India Company trading post in Nagasaki Harbor from 1823 to 1829. During that time, he visited Edo as part of the Dutch mission to the Shogun’s court. Among the books and maps he brought back on his return to Europe was a book illustrating the various stages of the Tokaido. Above the spot showing Otani, Siebold wrote in by hand “Ootsu-e.”

The British Japanologist Basil Hall Chamberlain also mentions Otsu-e in his classic Things Japanese (Lecturable Publishing, Digital version 2013), the first edition of which appeared in 1890. The writer Lafcadio Hearn (Koizumi Yakumo) collected them and the French cultural anthropologist Andre Leroi-Gourhan compared them to similar mass produced French folk art such as prints made in the city of Epinal at the foot of the Vosges mountains in eastern France. He viewed such art as representing the intersection of the sacred and the profane, realism and stylization.

Thus, Otsu-e became appreciated by Japanophiles as much for their ethnographic value as for their artistic merits. As a folk art, Otsu-e might be compared with other expressions of the popular mind such as the religious-oriented Pattachitra paintings in the Orissa region of India, or the farmers’ paintings in the Huaxian district near the city of Xi’an in China.

Actually, it has only been in recent decades that Otsu-e have finally come to be treated as folk art worthy of admiration in art galleries. In the spring of 2019, the Maison de Japon du Paris staged “Otsu-e: Peintures populaires du Japon,” the first major exhibition of Otsu-e in Europe, which attracted 7,500 attendees. And in the fall of 2020 the Tokyo Station Gallery held a special exhibit of Otsu-e: “Otsu-e: Another History of Edo Painting”.

The Paris exhibition traced the impact of Otsu-e on Western artists such as Joan Miró and Pablo Picasso, as well as the renowned German architect Bruno Taut. Picasso was known for his interest in “primitive” art and had several Japanese friends, one of whom might have interested him in Otsu-e. In any event, we know that he hung ukiyo-e and Otsu-e on the walls of his studio, and he seems to have had a particular liking for an Otsu-e showing a rat and cat getting drunk.

Of course, when art is divorced from the place of its creation it can often be misinterpreted, or at least lose some of its background meaning. One of the most famous Otsu-e motifs shows a dog tugging with its teeth on the strategically located garment of a blind man. In some cases, it is a fundoshi loincloth, in others an undergarment. The effect is humorous, although this kind of slightly cruel humor might be frowned upon today.

However, I get the impression that originally there was more to the story. Otsu was known for its many acupuncturists, who were traditionally blind.

Moreover, a community of blind biwa players lived near the Semimaru Shrine at Otani. Semimaru is perhaps the saddest of all plays in the repertoire of the Noh theater. It tells the story of a prince who has been abandoned in the mountains because he was born blind, reuniting for one evening with his sister who has gone mad. Both are victims of inexorable karma. The only hope offered is that by enduring suffering they might enjoy good fortune in some future life.

A number of major museums worldwide now display examples of Otsu-e, including the Museum of Fine Arts in Boston and of course the Otsu City Museum of History. You can readily view several examples on the Honolulu Museum of Art’s online collection. Just search “Otsu-e.”