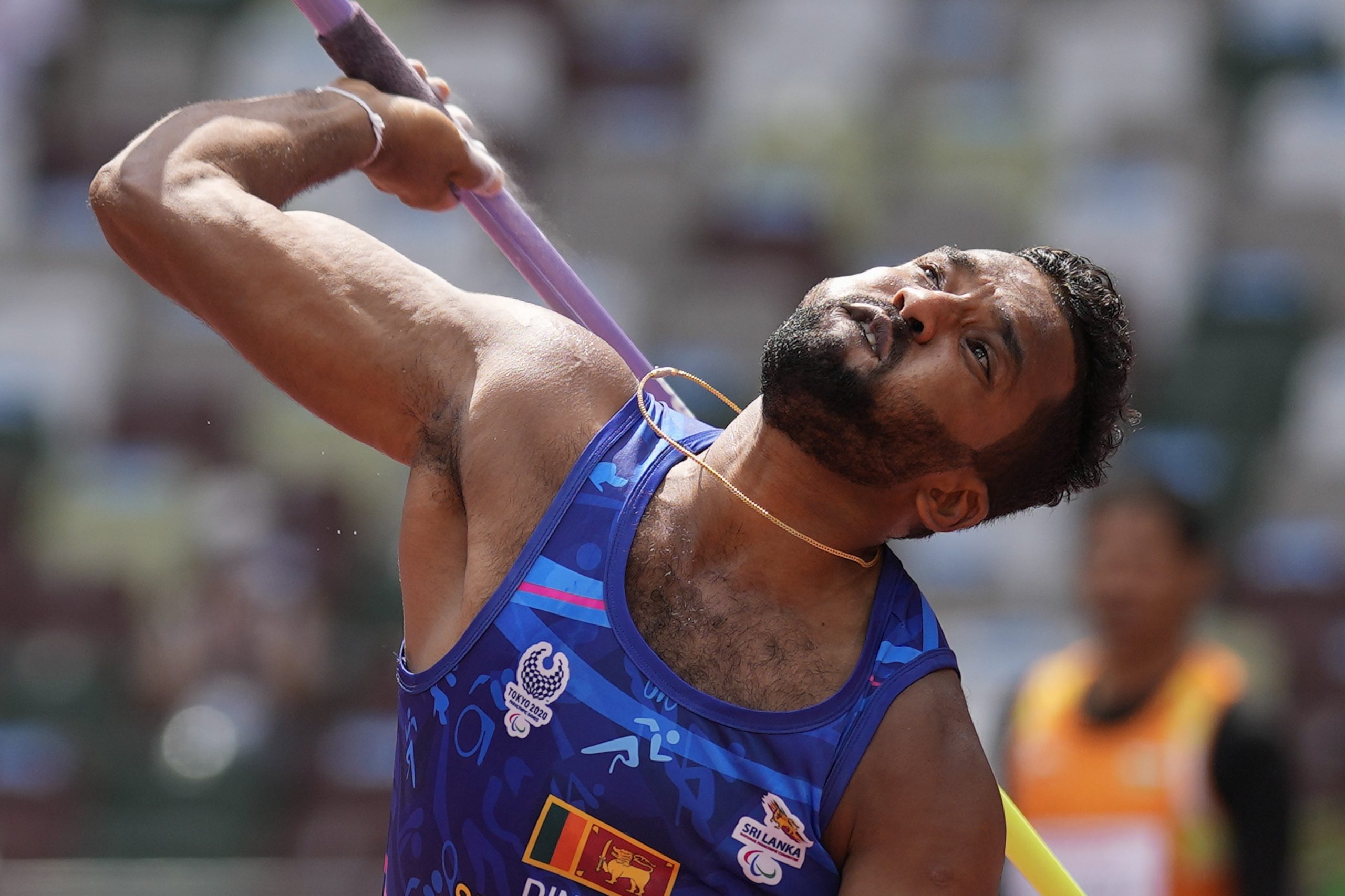 It was a historic day for Sri Lanka, thanks to Paralympian Dinesh Priyan Herath Mudiyanselage.

On Monday, August 30, the Sri Lankan won the gold medal in the men’s standing javelin throw F46 at the Tokyo 2020 Paralympic Games at the New National Stadium.

As the local temperatures reached about 33 degrees Celsius, Herath Mudiyanselage was in his stride and on his way to setting a world record of 67.79 meters on his third attempt.

His throw broke the previous record, set by silver medalist, India’s Devendra Jhajharia, who came in second this time with a throw of 64.35 meters. Fellow Indian Sundar Singh Gurjar clinched the bronze medal, with a throw of 64.01 meters.

Herath Mudiyanselage has been a rising star in the sport. The 35-year-old athlete snatched the bronze medal in the 2016 Rio de Janeiro Paralympics. The Sri Lankan also gained the silver medal in the 2019 World Championships in Dubai, despite suffering an arm injury just a month before the competition.

“I am very happy because my main dream came true. I have no words to describe [the feeling],” said the gold medalist to Olympics.com, who had kissed the Sri Lankan flag after claiming victory.

The athlete dedicated the victory to his wife: “I have three children and my wife looks after them very well. She motivates me. Our youngest child is only eight months old. (My wife) has done everything. She has given me freedom to do sport. I thank my wife for this gold.

Prior to being a Paralympian, Herath Mudiyanselage was in the army, but his military career was derailed when he was shot in the arm with three bullets in 2008 in Sri Lanka’s civil war.

He spent four years in the hospital recovering from the injury, after which he started training in para athletics as a hobby. His wife supported him when the sport started taking up more of his time, and it was at times financially difficult for the family.

“It took me four years to piece my hand together. Those were the most testing times of my life. However, javelin has given me everything, it has helped me get my life back together and this gold is the result of all the hard work that I have put in,” Herath Mudiyanselage told Paralympic.org.

Star Takayuki Suzuki swam to a silver medal in the men’s 200-meter freestyle in the S4 category for physically impaired, finishing in 2 minutes, 55.15 seconds. He was behind Israel’s Ami Omer Dadaon, who won the gold medal with a world record time of 2:44.84.

The Shizuoka-born Suzuki added to his already impressive haul, and achieved his fourth medal in the Tokyo Paralympics. He had previously scored a gold medal in the men’s 100 freestyle S4 and bronze medals in the 50 breaststroke (SB3) and 150 individual medley (SM4).

“I aimed at winning a medal in all events [which I entered],” Suzuki commented after the race, according to The Yomiuri Shimbun. “In this regard, I achieved what I wanted.”

Uchu Tomita, whose first name means “universe,” showed a stellar performance and gained his second medal of these Paralympics, with the bronze in the men’s 200 individual medley in the SM11 category.

The Kumamoto native had previously snatched the silver medal in the men’s 400 freestyle in the S11 category.

It was a nail-biting final in the men’s T64 100-meter final at the Olympic Stadium.

The track category, which was popularized by South African athlete Oscar Pistorius, is one which is dedicated to those who have a limb deficiency below the knee.

However, Germany’s Felix Streng was the fastest runner of the day, finishing the race in 10.76 seconds. The 26-year-old, who was born in Bolivia, had the best time in the final, and didn’t fail to deliver.

Costa Rica’s Sherman Isidro Guity Guity snatched the silver medal, with a time of 10.78 seconds (only 0.02 seconds behind Streng). Guity Guity was competing in able-bodied competitions until 2017, when he was injured in a motorcycle accident.

The excitement followed the final down to the announcement of the bronze medal results, as Team GB’s Peacock, and Germany’s Johannes Floors appeared to finish at the same time.

The German athlete considerably improved his Rio de Janeiro result, when he finished 12th in the T44 category. Floors was also the only one in the group wearing prosthetics on both legs, following an amputation at the age of 16 due to a painful congenital defect in his lower legs.

For several minutes after the finish, the first two spots on the podium were announced but the third place was not. Then it was declared that both Floors and Peacock finished with an identical time of 10.79 seconds, and both athletes were awarded bronze medals.

The third-place effort was a season’s best for Peacock and the first Paralympic medal and a personal best for Floors. The two collapsed in a relieved hug, celebrating their shared medal.

After learning he had been awarded a medal, Peacock commented: “I didn’t think it [identical times] could happen! It’s been incredible. I have had an interesting 18 months [with injuries], so I am incredibly proud to be sharing the podium with the guys.”

The Japan men’s wheelchair basketball team recorded a 67-55 victory over Turkey in the Group A teams’ final preliminary round game at Ariake Arena.

Japan (4-1) and Turkey (3-2) had already qualified for the quarterfinals, which are set for Wednesday, September 1.

Ugur Toprak led Turkey, which placed fourth at the Rio Games, with 17 points.

With a dominant effort to close out the game, Japan channeled its focus on bouncing back from a 79-61 loss to Spain on Sunday, August 29.

“It was a good game led by our stingy defense,” Kozai said in a post-game interview, according to Kyodo News. “We were able to make an adjustment from the game against Spain.

“We were also able to fix some early flaws, such as not getting back in time.”

Kunieda Breezes Past Ji in Third Round

Men’s World No. 1 Shingo Kunieda, the Paralympic singles champion in 2008 and 2012, cruised into the quarterfinals with a 6-0, 6-1 victory over China’s Zhenxu Ji at Ariake Tennis Park.

The 37-year-old Kunieda will face France’s Stephane Houdet, the No. 6 seed, in the quarterfinals.

Rogge served as IOC president from 2001-13. He succeeded Juan Antonio Samaranch as president.

In his long tenure, the Belgian-born Rogge presided over the IOC when Tokyo was awarded the 2020 Tokyo Olympic and Paralympic Games during the IOC Session in Buenos Aires in September 2013.

International Paralympic Committee President Andrew Parsons paid tribute to Rogge, saying, “Jacques was always a passionate supporter of the Paralympic Movement and the Paralympic Games and will be sorely missed by all those who knew him. Our thoughts are very much with his wife Anne and family at this time.”

Parsons added: “It was under Jacques’s leadership that London 2012, arguably the greatest Olympic and Paralympic Games, took place. During his time as IOC President, he signed several agreements that not only offered the IPC stability but enabled our organization to grow and flourish. We will forever be thankful for his assistance as the IPC would not be the organization it is today without his support.”

“I would like to express my sincere condolences on the passing of Jacques Rogge, the former President of the International Olympic Committee, who devoted himself to the promotion of the Olympic Movement during the radically changing times of the sporting world in the 2000s,” Hashimoto said. “As IOC President, he was one of the first to address the issue of raising interest in sport among younger generations, exemplified by his establishment of the Youth Olympic Games.

“Urban sports, which made their debut at the Youth Olympic Games, became part of the Olympic program at the Tokyo 2020 Games, and the youthful energy of the younger generations has helped to transmit the Olympic values of respect, excellence and friendship to the world.”

She added: “The scene of former President Rogge holding up a card with the word ‘TOKYO’ on it when he announced the decision to host the Tokyo 2020 Games at the IOC Session in September 2013 will forever remain in our memories.”