Place It 'Somewhere Else,' Duterte Says of Uprooted 'Comfort Woman' Statue in Manila 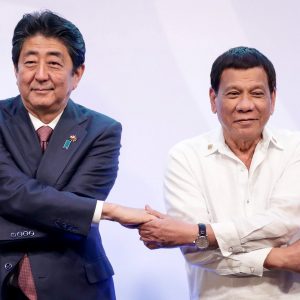 A female statue in Manila symbolizing “comfort women” during Japan’s occupation (1942-1945) of the Philippines during World War II has been removed last week, with President Rodrigo Duterte saying the government would “honor it” if it were erected on private property.

The statue was built along a major boulevard in the Philippine capital of Manila last December by a Filipino-Chinese organization and others, with the public works ministry and the foreign affairs ministry denying having given any permits for it. The marker, however, bore the seal of the National Historical Commission of the Philippines.

Roxas Boulevard, overlooking the Manila Bay, is where the Japanese embassy is also located.

The statue of a Filipino woman had been set up on a promenade facing Manila Bay under the jurisdiction of the Manila city government. When the Sankei’s Manila bureau sent a staffer to the statue site for confirmation on the morning of April 28, the site was found to have been reduced to a hole. Measuring about two meters in width and about one meter in length, it was fenced and covered with a blue plastic sheet. There was no statue nor heavy machinery nearby.

However, photos of a government-owned backhoe positioned near the statue had been posted by citizens online days before the removal took place.

According to a shop clerk near the site, a group of men calling themselves employees of the city government took down the statue on the night of April 27 using a backhoe and other equipment. The pedestal and its monumental plate with an inscription were also taken off in a careful manner before being taken away together with the statue, the store clerk said. He quoted one of the city government workers as saying they were engaged in the removal operation “for a drainage improvement project.”

The Department of Public Works and Highways said in a statement that the statue was removed “to give way” to concrete drainage pipes and footbridges that are part of the plans to improve the Roxas Boulevard Baywalk Area.

Teresita Ang-See, a Filipino-Chinese, who played an advisory role in erecting the statue, told the Sankei that she had made an inquiry to the city authorities about the matter, but was given no notice about the statue’s removal.

The construction of the female Filipino monument was planned by Tulay Foundation, the Filipino-Chinese organization, and other bodies. The National Historical Commission of the Philippines authorized the project to erect the statue with the pedestal bearing the inscription. It read in part in Tagalog “for the cause of paying a tribute to the memory of Filipino women who were victimized by Japanese forces’ abuses during Japan’s occupation of the Philippines.” The Manila municipal government then granted the permission to locate the statue on the bayside promenade.

President Duterte’s spokesman said in January that the Philippine chief executive himself would not act on the issue since “the statue is not erected by Malacañang,” referring to the presidential palace.

However, on Sunday, April 29, two days after the statue was removed, the Philippine president said the statue should not be erected to “antagonize other nations.”

In a speech in his home city of Davao, Duterte said: “Whose initiative was it, I really do not know. I didn’t even know that it exists. But it has created somehow a bad, you know… You can place it somewhere else.”

He continued: “If there is what you would call a memorial for injustice committed at one time, it’s all right. But do not use…. It is not the policy of government to antagonize other nations.”

The President said if the statue was erected on private property, “we will honor it.”

He also cited Japan’s reparation efforts since the war ended.