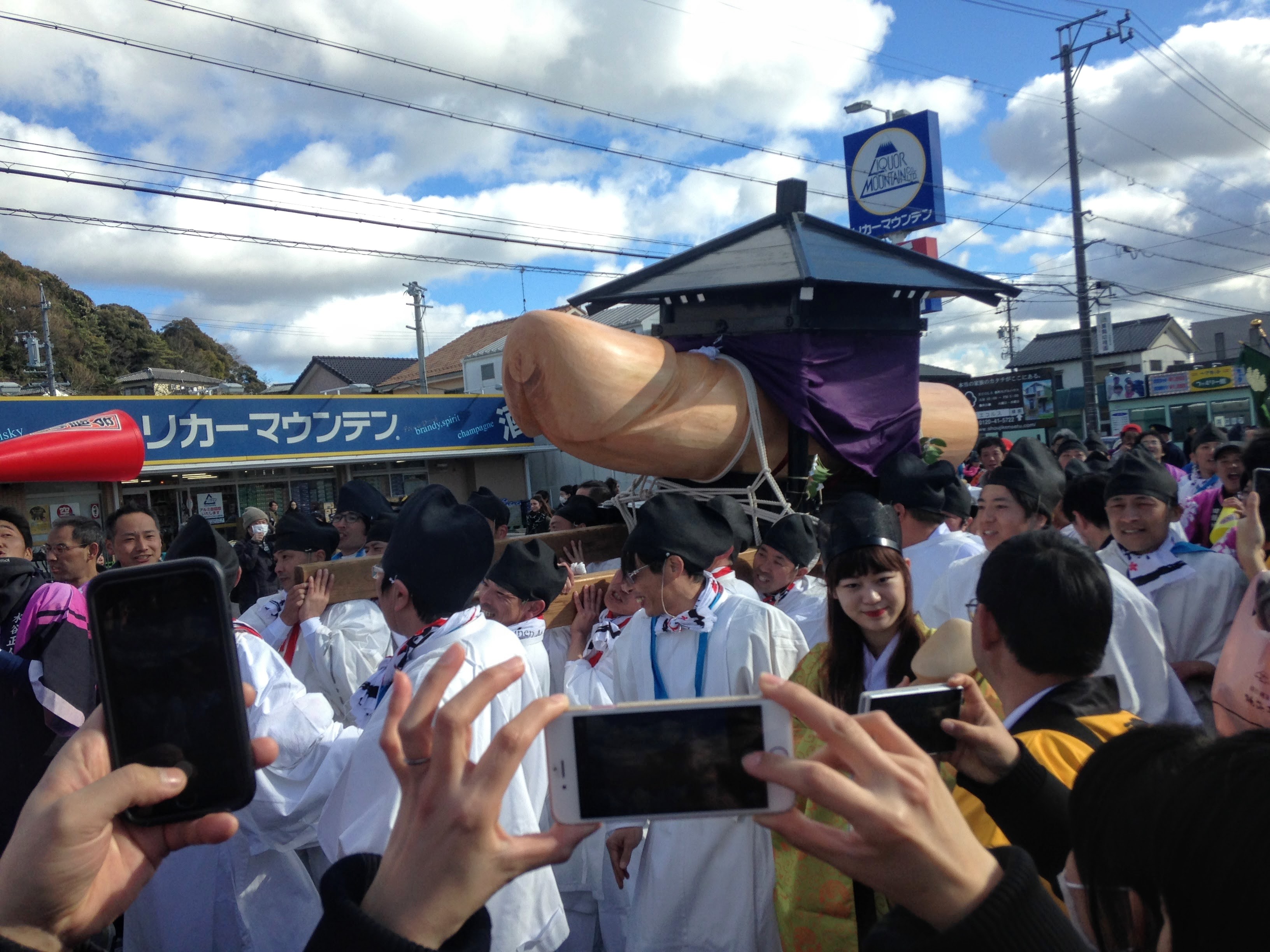 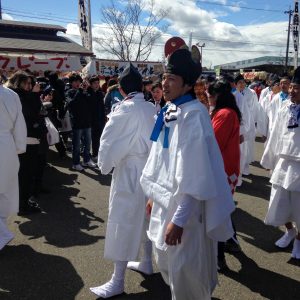 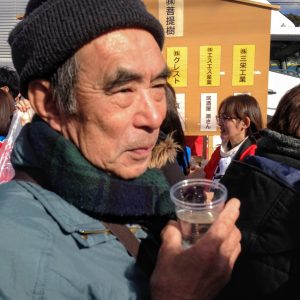 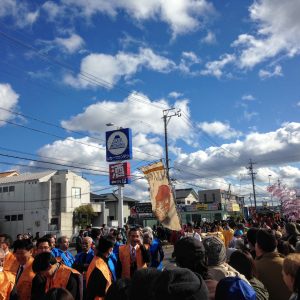 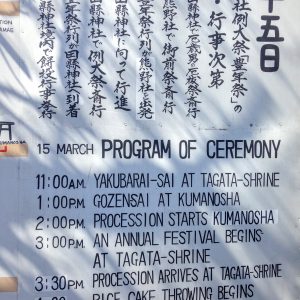 Progress was slow, but no one seemed to mind. This was a festival, and people were in a good mood.

As the purple-robed Shinto priests ascended the stage, excitement started building in the air. We packed into a small square where a towering scaffold had been erected. Old ladies hawkishly elbowed younger viewers to get into better positions. I shuffled with the jostling crowd, the sounds of laughter and cheerful chatter surrounding me.

A festival representative spoke over a loudspeaker, his drunken slurring eliciting roars of laughter. “Remove your glasses. . . put away your cameras. . . if you get hurt it’s not our fault.”

“What are we waiting for?” I asked Yoko.

“The mochi nage, the mochi throwing!” she replied.

It was 16:00 on March 15, and we were gathered for the final event of Honen Matsuri, the biggest fertility festival in Japan.

The week before, I had been at dinner with Yoko and her finance, Justin. I had been living in Nagoya for a few months and didn’t particularly care for the city. Life there just didn’t give me a sense of the culture or history I had expected to find in Japan.

Justin suddenly turned to me.

“Hey, we’re going to a penis festival! You should come.”

A penis festival?!?!? That was an invitation I had never expected to receive. My curiosity was piqued, but I was hesitant. What could that possibly entail?

My Japanese cultural daydreams had centered around kimonos and matcha tea, not genitalia. However, a beer later, my friends had convinced me to join them, promising a fun day and an interesting cultural experience – just not what I had expected to find in Japan.

Honen Matsuri literally translates to “harvest festival”. These festivals, held in early spring in hopes of a bountiful harvest, have been occurring in Japan for over a thousand years. Along the way, they’ve evolved into celebrations of all things related to fertility and prosperity, including reproductive organs.

Komaki, about an hour north of Nagoya, is a sleepy, industrial town, but once a year it is transformed into a bustling site of reverence and revelry.

On the big day, I nervously met my friends at the train station. Upon arrival in Komaki, we first headed to the main shrine.

The courtyard was filled with people queuing up to give offerings or to purchase omamori. Inside the honden was a variety of wooden carved vegetables resembling male anatomy, such as eggplants and cucumbers.

This theme continued outside to a pair of large stone orbs. Women who desired to get pregnant rubbed these balls, and I watched as Yoko approached, bowed her head in prayer and solemnly ran her hands along the twin smooth surfaces. Although we had joked about the festival, clearly this was an ancient ritual that held incredible significance for her.

Around the shrine, the festival was in full swing. We browsed the colorful stalls selling crispy fried chicken, savory takoyaki, chewy barbecued squid on skewers, and my favorite – nikumaki onigiri.

But there was more unique fare to be found as well. Brightly-colored penis-shaped lollipops and intricately carved wooden phalluses were on display in some tents, as well as chocolate-dipped bananas covered in sprinkles, with two marshmallows thoughtfully positioned at the base like testicles.

Near 14:00, it was time for the parade. We lined the streets with the throngs of visitors and watched streams of priests and town officials pass, carrying wooden statues and banners emblazoned with vivid depictions of penises. Flanking the procession were festival workers in white robes distributing cups of free sake from wooden buckets.

Standing near us was a grizzled old man with a few teeth missing who was eager to pick up some new English words. “What’s that?” He grunted, pointing at one of the banners. “Penis,” I replied. “It’s called a penis.” “Pee-nus! Pee-nus!” he proclaimed, and uttered a maniacal laugh, exposing some tarnished metal fillings in his decrepit mouth.

Finally, it was the moment we had been waiting for. A small pavilion made its way up the street, swaying and rocking as it was carried by twelve 42-year-old men – a traditionally unlucky age. Resting on their shoulders was a 280 kilogram, 2.5 meter long carved wooden penis.

We joined the crowd trailing behind the giant phallus as it made its way to the shrine, where it was ceremoniously inserted to great fanfare and cheering. This would be its home for the year, when at the next festival it would be paraded back to the other shrine. And the cycle will repeat, back and forth.

As I watched a toddler run by with a chocolate-dipped banana in his mouth with his father in pursuit, I was struck at the surprisingly wholesome, warm atmosphere of the festival. Something similar just wouldn’t work in America. It would be mobbed by protesters, and drunken fights would break out.

But I wasn’t in America. I was in Japan, surrounded by strangers in a shrine courtyard waiting for Shinto priests to shower us with fist-sized balls of mochi. If you manage to catch one, legend has it that you will be blessed with fertility and children. I decided that if I caught one, I would give to Yoko.

This was not the Japan of my daydreams. That image was merely a stereotype. This was the real Japan, a place filled with real people and their real dreams and desires, existing in a perfect harmony of tradition and modernity, of spirituality and vulgarity, where a giant penis paraded down the street in hopes of a good harvest makes total sense.

And so, as the priests chanted and lifted the mochi, preparing to throw, I joined the crowd, raising my arms to receive something completely different from what I had expected.