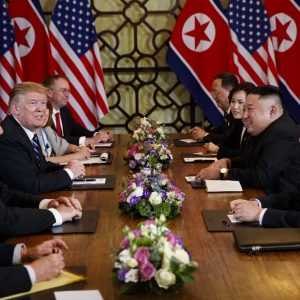 Revere evaluated the meeting result as salutary overall. Though the two heads of government did not reach an agreement, he felt it was a better outcome than making concessions in North Korea.
In January, U.S. Secretary of State Pompeo indicated that the ultimate goal might be to secure the lives of U.S. citizens. That led to concerns among observers that the Trump administration could reform its policy on North Korea and lose its strong ambition to achieve North Korea’s complete denuclearization and disabling of medium-range missile still pointed at U.S. allies such as Japan and South Korea.

Revere previously served as Acting Principal Deputy Assistant Secretary of State for East Asian and Pacific Affairs during the George W. Bush administration and is now a senior advisor at Albright Stonebridge Group. Here are excerpts from the interview.

First of all, President Trump and Chairman Kim reached no agreement, so how do you evaluate this meeting?

One way of looking at it is, once again, as in Singapore, the lower levels — that is, below the President’s level — had some discussions, several encounters with their North Korean counterparts, though probably not enough in Singapore, maybe not enough in Hanoi. But it was very clear from the background briefings that senior officials were giving in recent days that there was still a pretty substantial gap between the U.S. position and the North Korea position.

And there may have even been some telephone calls with the White House. Senior officials were making it very clear that the United States and North Korea did not define denuclearization the same way. A senior official — whose name we all know, but I can’t mention — acknowledged that North Korea had, in his view, still not made a decision to denuclearize.

Both of those things were being said literally on the eve of the summit. And so that was reflected in the ongoing discussions between senior-level aides in the administration and the North Koreans.

The President went into the summit with his own team acknowledging that there were significant gaps — fundamental gaps — between the two sides. And since it is my view and the view of many North Korea experts that the North Koreans have no intention of accepting the U.S. definition of denuclearization, and since the North Koreans have no intention of giving up their nuclear weapons, it was almost mission impossible for President Trump to bridge those differences, to bridge that gap, in Hanoi.

Are you satisfied with Mr. Trump’s decision not to accept a deal?

Well, I was actually deeply concerned on the eve of the summit that the President was going to make a compromise and give away some important U.S. leverage.

Whether it was major sanctions relief, or whether it was accepting the possibility of North Korea as a semi-permanent nuclear weapons state, or making a deal that would eliminate ICBMs but leave all the medium-range missiles still pointed at our Japanese and South Korean allies and our bases, I was personally convinced he was going to make some major concession that we would regret.
And so I am happy that he did not and that he walked away from it.

Do you believe that President Trump once considered concessions?

And that is exactly why they pushed him for complete sanctions relief in return for an insufficient North Korean offer. The political situation you mentioned, did you mean the Cohen scandal? Yes, the domestic political situation here, which just has not been going well for the President this week.

So it seems the timing of this second summit is premature. So do you think the timing of the U.S.-Kim summit was set because of the domestic political conditions in the United States?

No, when the summit was set, I don’t think anybody knew that there was actually going to be Cohen testimony or anything like that. I think what was driving the President’s schedule was a more vague and general sense that he needed a big political or diplomatic victory, not necessarily connected to the Cohen testimony.

Is it a victory for President Trump in a sense to walk away from a deal with Chairman Kim?

Mr. Trump’s policy on the DPRK seems to be deadlocked right now. What do you think will be the Trump administration’s next move?

And the basis for this policy approach is to offer the North Koreans incentives or inducements in order to bring about this result. Promising them a better life for their people, describing to them the merits of economic reform and restructuring, painting a picture of future investments in North Korea.

Now if all of that sound familiar to you, it should — because this is exactly the approach that I and the other people in the Clinton administration took in 1997, ’98, ’99, and 2000. And we used incentives, inducements, and promises — painting a rosy picture of the future of North Korea — to convince North Korea not to go down the path of nuclear weapons development. That approach did not work.

And so if incentives and inducements did not convince North Korea not to develop nuclear weapons back in the ’90s, then why would that exact same approach work today, now that they are a de facto nuclear weapons state?

What is your prescription to move forward?

My prescription remains what it has been for quite some time: the thing that the North Koreans value most highly is the preservation of their regime and therefore the appropriate approach is a disincentive-based approach. That is, to put economic, diplomatic, political, human rights, covert and other pressures on the North Korean regime to the degree that the regime begins to fear for its ability to exist.

So it’s maximum pressure times 10. And so, if the North Korean leader and his inner circle see that the regime’s existence is at stake, I believe they are rational actors that will make a rational decision that it’s time to give up their nuclear weapons in return for a cessation of pressure, combined with commitments to do more for North Korea in the future.

The maximum pressure right now is not enough to move forward?

No. Not only is it not enough, but the international community in a general sense has been easing off applying the maximum pressure there. There have been several decisions by the UN Security Council to remove certain sanctions to allow certain things to take place.

And so the North Koreans have seen the writing on the wall — that the United States is heading in the direction of easing the pressure on North Korea. And, as a result, they came to the table believing that they could exploit that and get the President of the United States to make an ill-advised decision.

The ‘maximum pressure times 10’ campaign that you advocate for, is that something that could possibly be done through the United Nation Security Council? Are you talking about unilateral measures by the United States?

Well, the United States needs to exercise leadership in the UN Security Council, but also with friends and allies and partners around the world.

(Click here to read the interview article in Japanese.)