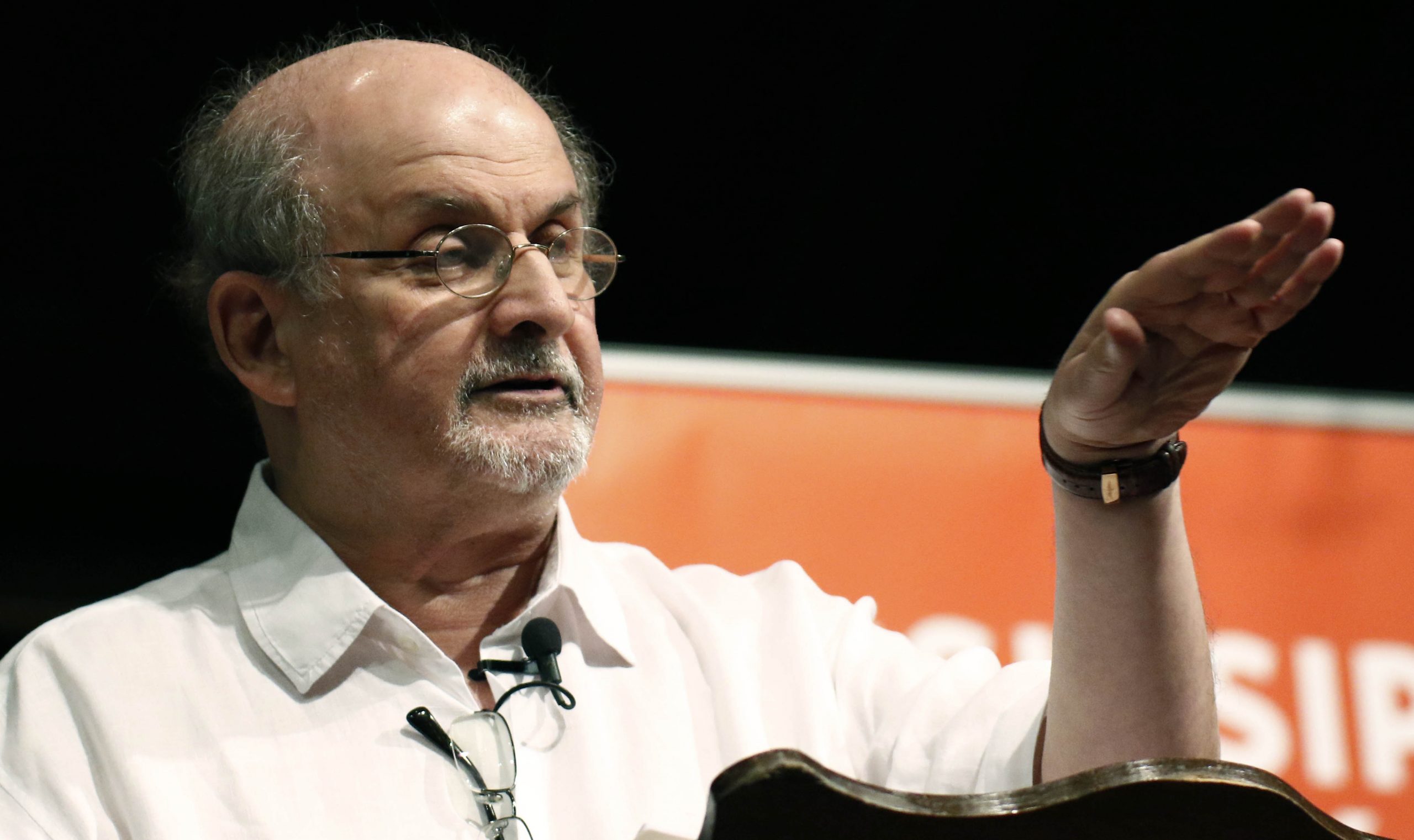 Author Salman Rushdie talks about the start of his writing career, during the Mississippi Book Festival on August 18, 2018. Rushdie, whose writing led to death threats from Iran in the 1980s, was attacked Friday while giving a lecture in western New York. (AP Photo/Rogelio V. Solis, File)

Acclaimed Indian-born British-American novelist and author Salman Rushdie was attacked on August 13 in western New York state during a packed public event at an amphitheatre.

Stabbed at least twice in the neck and abdomen, Rushdie is battling for life on ventilator support. The author’s fourth novel, The Satanic Verses (first published in September 1988), said to be inspired by and based on the life of the founder of Islam, Prophet Muhammad, has been in the eye of the storm ever since it came out.

While the reprehensible attack on Rushdie is being condemned globally, the fact that Salman was attacked nearly 34 years after a fatwa (a legal ruling on a point of Islamic law given by a recognized authority) was pronounced against him and his book The Satanic Verses, is telling.

In mid-February 1989, then Supreme Leader of Iran and Islamic Shia scholar Ayatollah Ruhollah Khomeini, denounced Rushdie’s novel as blasphemy and issued a fatwa pronouncing for the death of “… the author of the Satanic Verses book, which is against Islam, the Prophet and the Qur’an.” Khomeini called for Muslims to point him out to those who can kill him if they cannot themselves, leading to the then British Prime Minister Margaret Thatcher to provide Salman Rushdie with round-the-clock police protection.


Reminiscent of the Hitoshi Igarashi Attack

The attack on Rushdie has redrawn focus on Japanese scholar Hitoshi Igarashi (五十嵐一), the world’s first translator of The Satanic Verses into Japanese. In July 1991, Igarashi, then an associate professor of comparative Islamic culture at the University of Tsukuba (situated northeast of Tokyo) was attacked and killed under mysterious circumstances.

Found in his university office with fatal stab wounds in his neck, face, and arms, he succumbed to the assault at the University of Tsukuba and eventually died.

His death can be linked to a declaration a few months earlier, in March 1991, when Khomeini’s successor, Ali Khamenei, issued a further fatwa. This time it was accompanied by a multimillion dollar bounty for the death of “any of those involved in [the book’s] publication who are aware of its content.”

Igarashi’s stabbing, repeatedly in the face and arms, in July 1991 by an unknown assailant, followed the issuance of this second fatwa by only a few months.

Even today the scholar’s murder remains unsolved. Meanwhile, former CIA intelligence analyst and expert on Middle East politics, Kenneth M Pollack alleged in his 2004 book, The Persian Puzzle: The Conflict Between Iran and America (Random House) that the attack on Igarashi was a covert operation conducted by the Iranian Revolutionary Guards.

Igarashi, 44 years at the time of his assassination held a doctorate in Islamic art and was a respected scholar of Arabic and Persian literature and history. He had enrolled at the Imperial Iranian Academy of Philosophy in Iran during the waning days of the Shah in 1976.

Supportive of Rushdie’s literary work, Igarashi argued that Rushdie was not anti-Islamic. The Japanese translator described The Satanic Verses as a book that unfurled a realistic take on Islamic theology.

In line with this thinking, and himself the author of multiple books on Islam, including The Islamic Renaissance (Keiso Shobo 1986, in Japanese) and Medicine and Wisdom of the East (Keiso Shobo 1989, in Japanese), Igarashi firmly believed that “… scholars cannot be worried about what will happen to them as a result of their work.”

Religious fanaticism remains a pejorative designation. Be it Salman Rushdie, or the slain translator of his work, Hitoshi Igarashi, the passage of time has evidently not succeeded in blunting hate, at least in the case of The Satanic Verses.

It has becoming increasingly apparent that the fine line distinguishing faith with fanaticism has become dangerously thin, especially in the context and question of literary freedom in terms of imagination, and its limits.