Shin-Gobankaji’s Pledge for the Survival of Japanese Swords 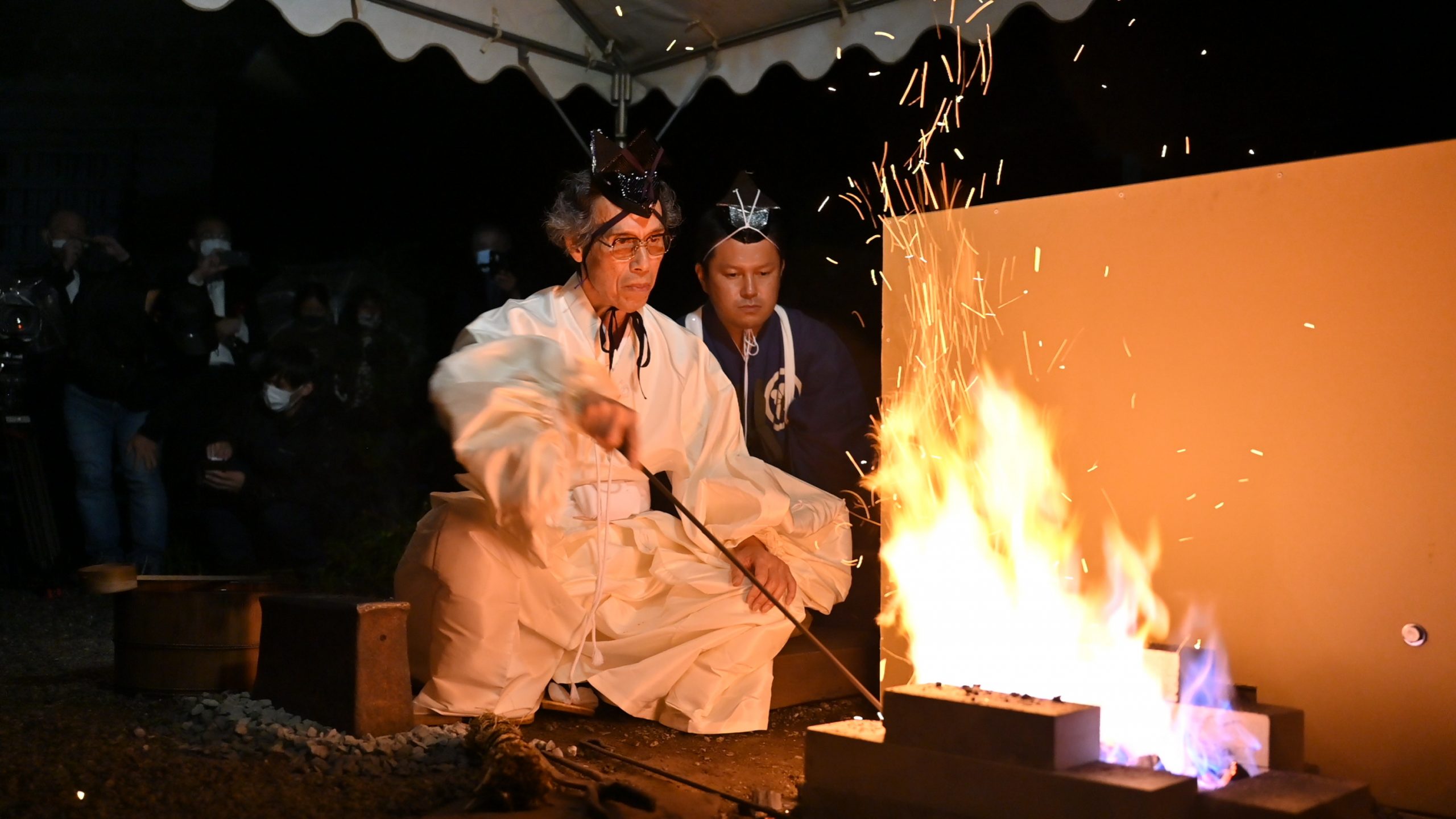 In the 3rd year of Jōkyu (1221) in the Kamakura period, the cloistered Emperor Gotoba (1180-1239) raised an army to attack the Hojo Regents of the Kamakura Shogunate. However, he was soundly defeated and exiled from the capital of Kyoto to the Oki Islands, which are located off the coast of present-day Shimane prefecture.

The fall of 2021 marked the 800th anniversary of his exile to the islands. In commemoration of this event, Japanese swords were forged in front of the gods at Oki Shrine on Nakanoshima, the Oki Islands.

Today, Japanese swords are celebrated all around the world as supreme steel works of art.

Emperor Gotoba was the genius who caught the fascination of people by infusing Japanese swords ー namely weapons ー with artistry. Gotoba is also known to have excelled in both literature and martial arts (Bunbu-Ryodo: the pen and the sword in accord).

After sunset on October 16, 2021, many people, including Tatsuya Maruyama, the Governor of Shimane, came to hear the ringing of hammers hitting the red-hot tamahagane and see the sparks flying into the darkness. The site was a makeshift forge constructed in the precincts of Oki Shrine, Ama Town.

Dedication events were held at Oki Shrine over the whole day, celebrating the 800th anniversary of Gotoba’s arrival to the Oki Islands. The festival concluded with a ceremonial sword forging demonstration dedicated to the enshrined spirit of Emperor Gotoba.

Gassan Sadatoshi, a designated Intangible Cultural Property of Nara Prefecture, and his apprentices all donned traditional e-boshi and costumes to carry out the ceremonial sword forging.

The Golden Age of Japanese Swords

The Gobankaji (swordsmiths in monthly rotation) was a system that was implemented about 10 years before the Jokyu War. The cloistered emperor Gotoba invited masters of each school, starting with Norimune, the founder of the Bizen Fukuoka Ichimonji school, and other smiths from various provinces to make swords with him every month.

In the history of swords, Emperor Gotoba was an avid sword enthusiast with a discerning eye. It is thought that the reason that there are many famous swords from the Kamakura period is due to Gotoba’s participation in sword making. Masters swordsmiths further refined their skills, raising the function and beauty of the Japanese swords up to a higher level.


Project Proposed by a British National

Japanese sword researcher, Paul Martin, said, "I feel like I was called through time and across the sea by Emperor Gotoba."

After working as a curator at the British Museum, he has been active in Japan since 2004. He is also a trustee of the Society for the Promotion of Japanese Sword Culture Promotion (NBSK).

He first visited the Oki Islands in the early winter of 2017. While visiting historical sites related to the emperor, he suddenly came up with the idea of producing a 21st century Gobankaji. He made a proposal for the project to Mr. Shigeki Murao, a priest at Oki Shrine, and received his approval.

The Gassan Swordsmiths of Nara

Enlisting the help of acquaintance and television director, Satsuki Sugimoto, Martin’s proposed project began and the forging demonstration in front of Oki Shrine was finally realized in October 2021.

There was also sword forging carried out at Oki Shrine in 1939. Swords were dedicated to the shrine commemorating the 700th anniversary of Emperor Gotoba’s death by a group known as the Showa Gobankaji. The swords made by the prewar swordsmiths are on display at the Emperor Gotoba Museum in Ama Town.

One of the participants was swordsmith Gassan Sadaichi, the father of Gassan Sadatoshi, who has become the first member of the Shin-Gobankaji.

Martin and his colleagues plan to have a total of 12 swords made by 12 modern master swordsmiths. The same number as Emperor Gotoba's original Gobankaji. The completed swords will be dedicated to Oki Shrine.

The crowdfunding page for the Shin-Gobanakaji Project can be found here.

A Craft in Crisis

Why did a British expat launch the Gobankaji?

I started the Shin-Gobankaji Project because the Japanese sword world is in a precarious situation.

Due to the internet, there are an increasing number of self-taught sword craftsmen and swordsmiths outside of Japan. This has given birth to “Japanese-style swords”. There are production centers in China and Korea that are selling low cost production live blades for martial arts practice around the world.

Furthermore, if a real Japanese sword ends up in the hands of an amateur polisher who learned from the internet, they could do irreparable damage to the blade.

I think that the Japanese people are simply unaware of the situation that is taking place.

Additionally, the lives of many swordsmiths are very hard in modern Japan. Under the current circumstances, there are many cases where the training of successors cannot be sustained. Since the advent of more women (Token Joshi) becoming interested in swords, their popularity has increased, but modern swordsmiths struggle to sell newly made swords.


What skills are involved in sword making?

The survival of Japanese swords depends not only on swordsmiths, but also the techniques of many other skilled craftsmen such as polishers, scabbard makers, and handle wrappers. If even one of those skills are lost, the whole craft will suffer.

Japanese swords are deeply linked to many aspects of Japanese traditional culture. For example, sword-making is also an indispensable part of the 1300-year-old ceremonies that are held at Ise Shrine every twenty years.

Is there a specific goal?

The objective of the Shin-Gobankaji Project is to dedicate Japanese swords by master swordsmiths of each generation to the enshrined spirit of Emperor Gotoba in Oki Shrine, so that the traditional sword-making techniques and culture can be preserved and passed on to future generations without interruption.

You mentioned crowdfunding. Is that how you’re funding the twelve swords?

Yes, we are using global online crowdfunding (CF) to raise funds for the twelve votive swords.

The target amount for the first sword by Gassan Sadatoshi is set at 4 million yen. So far, over 1 million yen has been raised, but reaching the ultimate goal is proving to be a challenge.

As Satsuki Sugimoto, whose mother was Italian, has said, "It is a project in which both British and Italians are working for the future of Japanese swords. I would like to formulate a global scale strategy for the preservation of these traditional crafts.”

By the way, it was raining on October 16 in Oki. It is said that it always rains on days when events are held for Emperor Gotoba. His legend is alive and well.