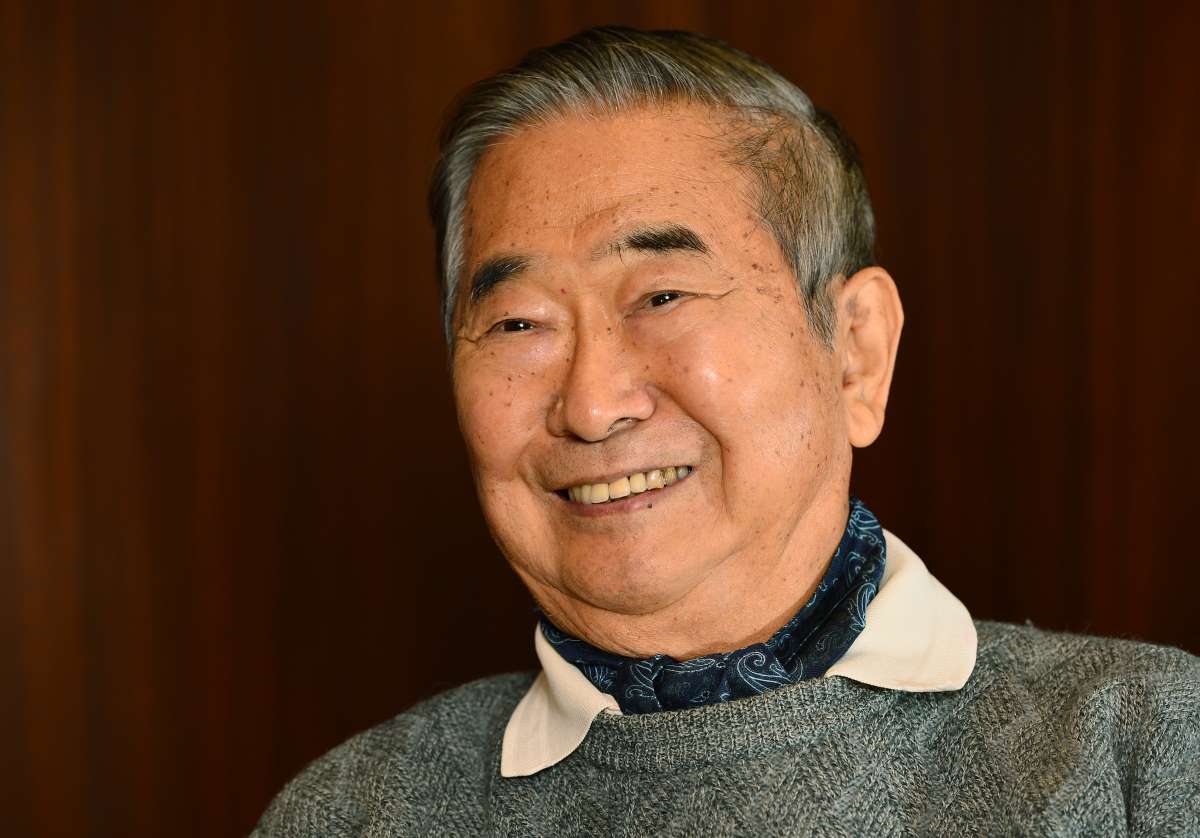 Most of the English language obituaries were perfunctory at best, concentrating on his later political career and the various verbal outrages that, it seems, he needed to commit from time to time.

In fact, Ishihara was a much bigger and more complicated man than that.

A man who won Japan’s pre-eminent literary prize at the age of 23; who was involved in over forty Japanese films; who directed the Japanese segment of an international omnibus film that featured directors of the calibre of François Truffaut and Andrzej Wajda. And he was a man who spent two months hunting for the Loch Ness monster, specimens of which would be presented to Queen Elizabeth and Emperor Hirohito, on the assumption that more than one would be found lurking in the lake.

Ishihara professed to dislike foreigners but was pro-immigration and set up a consultative committee of foreign residents while Governor of Tokyo. A Francophile who used a quotation from Mallarmé as the epigraph of one of his earliest stories, he mocked the French for their unusual system of counting numbers above sixty.

He was a high-profile celebrity for most of his life, an adventurer, a believer in flying saucers and like many of us, a mass of contradictions.

Most of all, he was a natural provocateur, of the kind that thrived in 1960s Japan, but is much less welcome in today’s more rigidly policed world.

Whatever you think of him, he deserves a much fuller account of his life and times.

In accordance with his wishes, Ishihara’s charred bones were cast into the water off the Shonan Coast in Kanagawa Prefecture a few weeks ago.

It was an apt choice. That area was the setting of the novel, Taiyo no Kisetsu (“Season of the Sun” Shinchosha Publishing), that won him the prestigious Akutagawa Prize in 1956 and propelled him to nationwide fame.

He and his film star brother, Yujiro, the Japanese James Dean, came to personify the sun, sex and boating lifestyle of the hedonistic youngsters of the era.

I was invited to a private dinner with Shintaro Ishihara in the mid-1990s. An ordinary parliamentarian at the time, he wanted to hear about the bad loan crisis then- engulfing the Japanese banking system. In person, he was charming and physically impressive, tall for a Japanese, and still in possession of his youthful good looks.

Our conversation ranged far and wide, with Ishihara displaying a great breadth of knowledge, but also enjoying the opportunity to let loose a few outrageous comments. One, comparing the facial features of the Japanese prime minister of the time to an item of male genitalia, had me wondering whether I had heard correctly. The only other person in the room, an Ishihara friend, provided some American street slang as confirmation.

The conversation moved on to The Japan That Can Say No (1989, Simon and Schuster, in English), the potboiler that Ishihara had authored with Akio Morita, the formidable founder of Sony, at the zenith of Japan’s bubble economy. The CIA had gone to the length of illicitly translating the book into English. Ishihara had pranked them beautifully with his suggestion that Japan should sell its most advanced semiconductors to the Soviet Union unless the United States ceased complaining about Japanese trading practices.

“Forget about that thing,” he said, dismissing it with a wave of the hand. “You should read my early novels.”

I did. His first was written in the same year as the James Dean movie “Rebel Without a Cause” was released. The Taiyo-zoku are also thrill-seeking rebels who brawl, drink and have promiscuous sex, much to the consternation of their weak, disrespected parents.

An Age of Nihilism

The father of Tatsuya, the hero of Season of the Sun, invites his son to thump him in the stomach, then doubles up in pain, whining that he hadn’t expected the blow to be so hard. The mother of one of Tatsuya’s friends takes a lover to spite her philandering husband. When the son finds out, he kicks her in the face, much to the approval of his Taiyo-zoku pals, who consider it a manly deed.

Ishihara writes “the adult world feared them as a dangerous force, second only to communism…in the young people’s eyes, the reward of virtue was dullness and vanity…the young looked for something broad and fresh to build on.”

They don’t find it. Unlike the hero of “Rebel Without a Cause”, Tatsuya and his friends come from privileged backgrounds and are pack animals, not loners. Their nihilism, destructive of themselves and others, is more like the morally numb Meursault, the hero of Albert Camus’ The Stranger (1942, in French) than the mixed-up but sensitive character played by James Dean.

Season of the Sun contains plenty of shadow. Eiko, the main female character, was traumatized by the loss of two favourite cousins who died in the war when she was a little girl. After a lover died in an accident, she became “determined to take from men and give nothing in return….all  men were just trophies for her bedroom.” She meets her match in the callous Tatsuya, who sells his relationship with her to his older brother for five thousand yen.

In the follow-up novel, Crazed Fruit, a similarly beguiling young beauty sleeps with two brothers while being married to a middle-aged American sugar-daddy. Both stories end in disaster and death.

One startling image symbolizes the collapse of values after the lost war and the American Occupation. While Tatsuya’s mother cooks dinner, the naked Tatsuya returns from the shower and thrusts his erection through the thin white paper of the shoji lattice door behind which Eiko awaits him.

The film versions of the two stories were smash hits, with “Crazed Fruit” featuring Yujiro Ishihara in his first starring role and Shintaro in a bit part. It is by far the more accomplished film. According to critic Mark Mohan, it has the style and theme of the French nouvelle vague, despite being released several years before Truffaut and Godard had made their first films.

The most problematic of the Taiyo-zoku films is “The Punishment Room”, adapted from an early Ishihara short story by noted director Kon Ichikawa and his script-writer wife Natto Wada. The original story depicts an ordinary student called Katsumi who takes the Taiyo-zoku philosophy to an extreme by engaging in date-rape and unmotivated attacks on American soldiers.

“I do exactly what I feel like doing,” he declares. “That’s all I know  – that’s all I’m able to do.” The retribution of his fellow students is sickeningly violent and prefigures the murderous internecine battles of Japan’s student radicals in the late sixties and early seventies.

The film version is only slightly less brutal.

Encapsulating the Frustration of a Time

Altogether, Ishihara was involved in over forty films between 1956 and 1972, mostly as writer of the source material and / or script, but occasionally as actor, director, or composer, and sometimes singer of the theme song.

For my money, by far the best of them is “Pale Flower,” an existential gangster film much esteemed by Francis Ford Coppola and Martin Scorsese, who has apparently watched it over thirty times.

From the opening monologue of the world-weary protagonist to the deadly climax, reinforced by the soaring voices of Henry Purcell’s “Dido and Aeneas” opera, the viewer is swept along by the characters and the inevitability of their tragic fate.

Muraki, in his immaculately tailored suit, must be the best dressed yakuza in the world. The mysterious, thrill-seeking woman who he meets at the gambling table looks as if she has just arrived from another planet. The cinematography is extraordinary, as is Toru Takemitsu’s dissonant soundtrack.

Director Masahiko Shinoda is a celebrated auteur who was in his prime in the 1960s and early 1970s.  In an interview about the film, he commented that there were only two novelists capable of encapsulating the frustration that young Japanese felt about their country’s loss of agency during the Cold War. Those two were Kenzaburo Oe and Shintaro Ishihara.

Pairing from the Left and Right

From today’s perspective, it seems an unlikely pairing. Oe, awarded the Nobel prize for literature in 1994, is a prominent leftist intellectual who at the time greatly admired Mao Tse Tung. Ishihara was a man of the right.

Ishihara himself was a frequent visitor to avant garde events. As he wrote in a contemporaneous article for Bungei Shunju, he and Mishima were both users of “Haiminaru” (ハイミナール) the Japanese slang for methaqualone, known familiarly in the West as “ludes”, “mandies” or “disco biscuits”.

Though widely used as a recreational drug, it was legal almost everywhere at the time. In Japan, where it was manufactured under licence by Eisai Pharmaceutical, you didn’t even need a prescription.

In short, there would have been nothing strange about a young lion of Japanese new wave cinema praising Ishihara’s artistic vision. Indeed, he was to be involved –  as script writer and writer of the source material – in two later Shinoda films.

Ishihara helped to mold the era, and the era molded him.