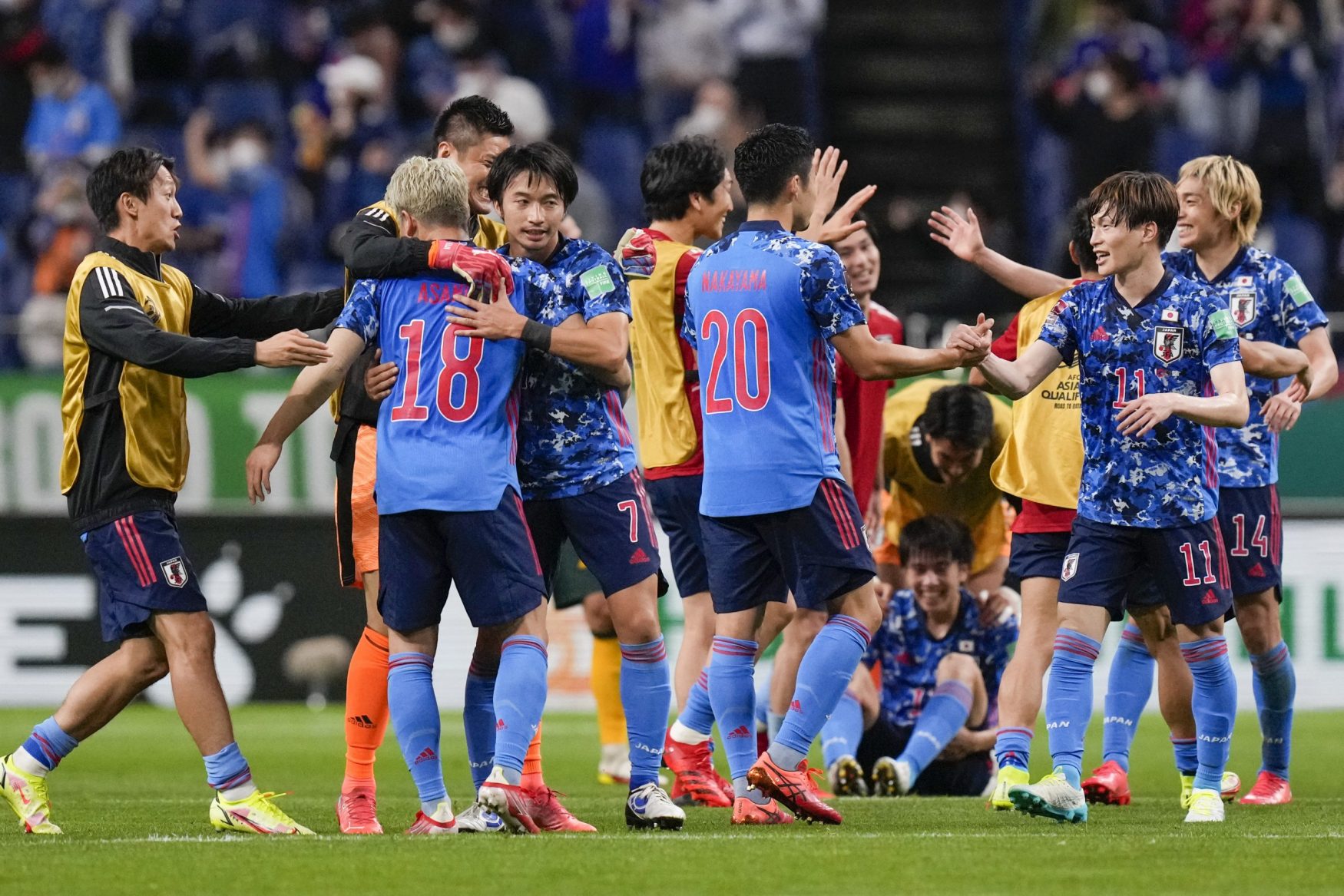 An early goal set the tone for Japan in a pressure-packed 2022 World Cup qualifying match against Asian Group B foe Australia on Tuesday night, October 12 at Saitama Stadium.

It was the Socceroos’ eighth straight loss to Japan.

Australia had evened the score in the 70th minute on an Ajdin Hrustic free kick, a brilliantly placed twisting, rising ball that sailed into the upper left corner of the net. Initially, Hrustic had been awarded a penalty kick and Japan’s Hidemasa Morita was assessed a foul for taking him down in the penalty area. But upon further review the Video Assistant Referee (VAR) used video footage to determine a foul had not been committed in the area, overruling the PK decision and switching it to a free kick.

Hrustic booted the ball above the Samurai Blue wall of players, a clinical display of poise under pressure, and past the reach of Japan goalie Shuichi Gonda.

That play seemed to ratchet up the level of intensity on the field.

And the spirited duel intensified as both teams vied for a go-ahead goal, with quality scoring opportunities at both ends of the field.

Japan caught a break in the 86th minute. Substitute Takuma Asano, who entered in the 78th minute, took a hard shot that rebounded off the post. But before it could be cleared away by the Socceroos, the ball bounced off Australia defender Aziz Behich and rolled into the net, and the own goal gave Japan a 2-1 lead it would not relinquish. (And Australia's winless stretch against Japan that began in 2009 was extended.)

When the final whistle sounded, there was a collective sigh of relief from Samurai Blue and the team's 14,000-plus supporters in the stadium.

“I thought both teams had a go at each other,” he said after the match. “It was an exciting game ... [and] at the end of the day I thought the boys did a great effort.

“The positives were we played some great football,” added Arnold, a former Sanfrecce Hiroshima player (1997-98) added. “At the end of the day it wasn’t meant to be. We’re on nine points from four games. It’s one game at a time.”

Australia finished with a 53.4% time of possession advantage to Japan’s 46.6. But Japan had 10 shots to Australia’s nine, including Adam Taggart’s blast that ricocheted off the post in the opening half. Yuya Osako also had a good scoring chance in the 34th minute, but his shot was off the mark.

'We've Been Preparing Ourselves Diligently'

In the postgame news conference, Japan manager Hajime Moriyasu, whose team improved to 2-2 in the final round of World Cup qualifying, spoke about the pressure his team faced in picking up a win to keep alive its hopes of qualifying for the World Cup for the seventh consecutive time.

"We've been preparing ourselves diligently, and that led to this result. We were under great pressure, but the players, coaches [and] the entire staff came together as one and stood tall," Moriyasu was quoted as saying by Kyodo News.

There was a visible look of relief on Moriyasu's face while making his opening remarks. Five days earlier, the look of disappointment was apparent throughout his press appearance following Japan’s 1-0 away defeat to Saudi Arabia.

In setting up Tanaka’s early goal, fellow midfielder Takumi Minamino surveyed the shifting movement of the defense and the spacing in front of the goal. He then set up Tanaka for a quality scoring chance, making a cross-field pass from left to right into the area.

Tanaka capitalized on the opportunity with a well-timed, low kick with his right foot, reaching his target.

"I believed in Takumi's ability to do his job there and just kept running. I stopped the ball and was able to concentrate and did well to get it in," Tanaka told reporters in a post-match interview.

A Critical Victory for Japan

Entering the fourth match of qualifying for Asian Group B, Japan was tied with China and Oman with three points apiece, with Australia and Saudi Arabia atop the group with nine points and winless Vietnam at the bottom with zero points.

Speaking about the challenge of facing an in-form Australian team after his team’s long journey to Saudi Arabia, Moriyasu insisted on Monday, October 11 that his players would be ready.

“The players have recovered both physically and mentally, and they are ready for the match against Australia,” Moriyasu told a news conference.

He continued: “We still have a chance to get back on track. In order to qualify for the World Cup, we will enter the match fully determined to win against Australia.”

As it turned out, determination was a defining characteristic of Japan’s performance against the Socceroos.

Now with six points through four games (of its 10 total matches in the final round of qualifying), Japan shifts its focus to a pair of upcoming road matches, at Vietnam and at Oman on November 11 and 16, respectively.