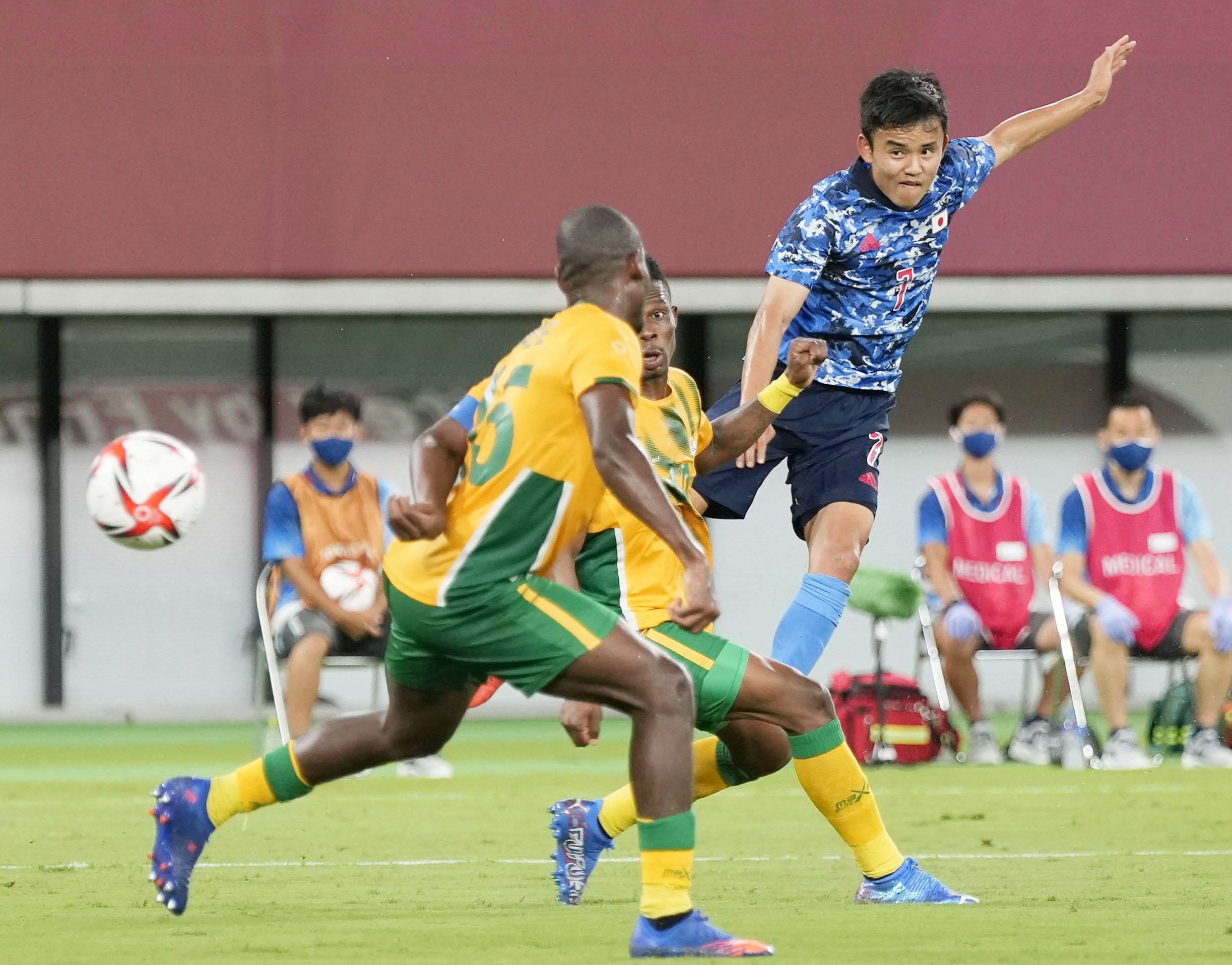 Japan's Takefusa Kubo scores in the 71st minute against South Africa on July 22.

Real Madrid winger Takefusa Kubo scored a superb second-half goal to lead host Japan to a 1-0 win over South Africa in its opening game of the men’s soccer tournament at the Tokyo Olympics on Thursday, July 22.

Kubo, who turned 20 last month, fired an angled, left-footed shot from the side of the box that deflected in off the far post to give Japan the lead in the 71st minute.

“We got off to a slow start but gradually got better after the break and then were able to protect the lead,” said Japan captain Maya Yoshida, who is playing in his third Olympics.

Thursday’s game at Tokyo Stadium was played without spectators as part of strict coronavirus countermeasures.

“Of course, we would have liked to have our fans here,” Yoshida said. “But it didn’t affect our play in any way and we were able to play as expected.”

Kubo has solidified his place as one of Japan’s brightest young stars and Thursday’s goal will only add to that status.

He has spent his first two seasons with Real out on loan to other clubs in La Liga, including most recently at Getafe. The Kawasaki native first appeared on the radar of Japanese soccer fans after being recruited by storied Barcelona youth academy, La Masia, at just 10 years old.

South Africa pressed for an equalizer after Kubo’s goal but was unable to find the net.

Japan had the better of chances in the first half and appeared to have taken the lead in the 34th minute, but Daichi Hayashi was ruled offside after beating the South African goalkeeper Ronwen Williams.

Hayashi came close again after the break with a close-range shot that Williams calmly turned away.

There was some question as to whether Thursday’s game could even be played. Two South African players and a member of the staff tested positive for coronavirus last weekend.

Eighteen players were determined to be close contacts. They were all staying at the Athletes’ Village and were forced to produce negative PCR tests before the start of Thursday’s game.

Tournament rules say a side needs at least 13 players for the match to proceed.

“After all the confusion and rumors, it turned out South Africa was in very good condition and was a difficult opponent,” said Kubo.

In Group A’s other match, Alexis Vega scored the first of four second-half goals for 2012 gold medalists Mexico in a 4-1 victory over France.

Vega scored first in the 47th minute and Sebastian Cordova added a second in the 55th.

Andre-Pierre Gignac, who plays for Mexican club Tigres, scored from the penalty spot in the 70th minute to narrow the gap for France, which won the Olympic title in 1984. But Uriel Atuna put Mexico ahead 3-1 in the 80th, and Eduardo Aguirre added a goal in stoppage time to complete the rout.

In a rematch of the 2016 Olympic final in Rio, Richarlison scored a hat trick to lead Brazil to a 4-2 win over Germany.

In a major upset, Australia beat Argentina 2-0, while Spain and Egypt played to a goalless draw.