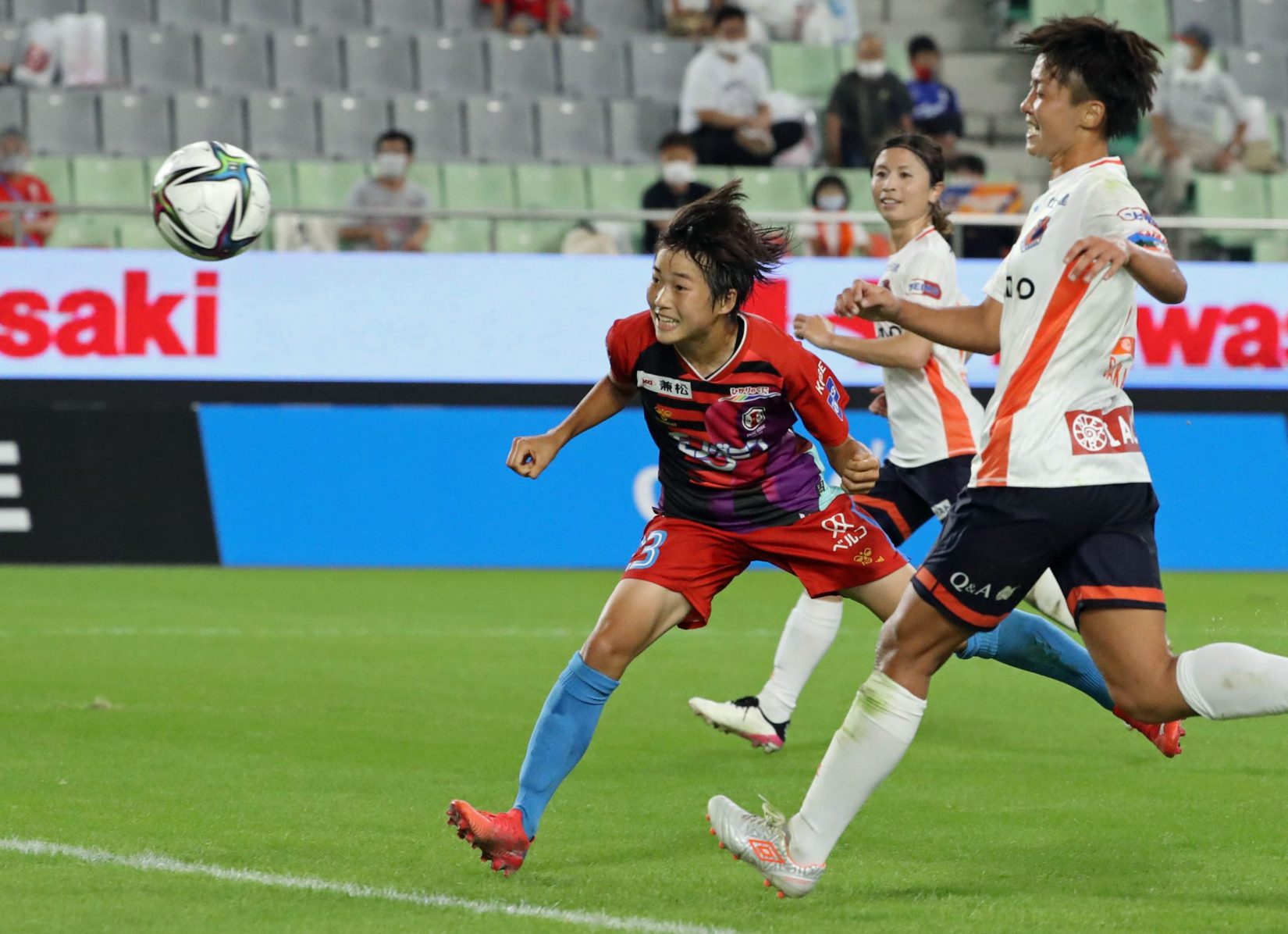 INAC Kobe Leonessa's Maika Hamano scores on a header in the 45th minute against Omiya Ardija Ventus on September 12 at Noevir Stadium Kobe.

The WE League launched its inaugural season with five matches on Sunday, September 12, and INAC Kobe Lionessa provided a plethora of highlights for their fans in a high-scoring rout of Omiya Ardija Ventus.

The “WE” in the name is the league’s stylized abbreviation for its official name, Women Empowerment League. The new league is striving to empower women on and off the field (each team must have 15 players on pro contracts, one female member on its coaching staff and one woman on its board) and in society at large.

What’s more, the league’s establishment holds another important distinction: the professionalization of the sport for the first time across the board in Japan for women’s soccer. The WE League overtakes the amateur 20-team Nadeshiko League as the top flight for Japanese women’s soccer.

In the day’s opening match, it didn’t take long for Takase, a forward, to etch her name in the WE League record book, notching the first goal in league history in the 4th minute.

“I was a little nervous in the opening round, but I’m glad I got a goal early and we finished with a good result of 5-0,” Takase said after the match, which was played before an announced crowd of 4,123 under COVID-19-related attendance restrictions.

An own goal made it 3-0 in the 41st. Hamano added a second tally on a header in the 45th and Takase completed her brace in the 57th minute.

After the match, Sasaki’s counterpart commented on Hamano’s potential.

“Hamano is a player who will lead the future Japan team. Getting the end product is huge for us as a team, too,” INAC manager Kei Hoshikawa was quoted as saying by Kyodo News.

Takase noted that players were active on social media to help spread the word about the league’s opening day. But when the match started just after 10 a.m. the focus was on the field.

For the players, Takase said, “it was a day to express their spirit and feelings on the pitch, so the team was fierce [with] the ball.”

Hamano said, “[The match] was full of excitement, but Takase-san scored the goal first, so I enjoyed the match.”

In the 11-team circuit, one team will have a bye each round, giving it extra time to participate in community-based and promotional activities. The scheduling format will consist of a fall season and a spring season, 20 games in total per club.

WE League chairperson Kikuko Okajima spoke about the new circuit’s ambitious agenda in an on-field ceremony before the Urawa-Tokyo match.

“A new page for women’s sports will open today in Japan,” Okajima said. “It is a league that is prepared to move forward with gender equality.”

Speaking to Agence France-Presse, Urawa striker Yuika Sugasawa said the new league must entertain the fans on a consistent basis.

“To create the right environment in Japanese women’s football, it’s important we play the kind of football people want to watch,” the striker was quoted as saying.

The WE League returns to action with a pair of matches on Saturday, September 18 (AC Nagano Parceiro Ladies vs. Tokyo Verdy Beleza and Sanfrecce Hiroshima Regina vs. Mynavi Sendai Ladies) and three more on September 20.

RELATED:
[ODDS and EVENS] Japan Football Association Raises the Bar for Women’s Soccer with WE League