On August 15th, as part of the National Liberation Day ceremony commemorating the 72nd anniversary of the liberation of the Korean peninsula from Japanese control, President Moon Jae-in touched upon the issue of conscripted laborers, saying “the suffering continues of those who were forcibly mobilized” under Japanese domination.

Read that again: “We will consider a joint north-south investigation of the victimization of conscripted laborers and others.”

Even if this statement carried the condition “improvement in north-south relations,” in the context of continued North Korean development of nuclear weapons and intercontinental ballistic missiles, it raises the question of how “in touch with reality” President Moon is when it comes to the unstable situation on the Korean peninsula.

Prior to raising the north-south issue, President Moon touched on “historical issues” between Japan and Korea. Although he did not explicitly call for a renegotiation of the agreement between Japan and Korea pertaining to the “comfort women,” his reference to “forced labor mobilization” under Japanese domination (conscripted labor, the Women’s Volunteer Corps, etc.) was something new.

The Japanese government’s position is that the right of individuals to make claims as former conscripted laborers or as members of the Women’s Volunteer Corps were extinguished by the 1965 Japan-Korea Agreement on Claims, and that this is an issue that has been fully settled between the governments of Japan and Korea.

Nonetheless, President Moon has brought it up again. Moreover, he has coupled it to a “joint investigation” with North Korea, a country that is the subject of international approbation for its missile development and other issues.

In 2012 the Korean Supreme Court ruled that “the right of individuals to make claims has not been extinguished.” This was followed by a series of lawsuits seeking compensation from Japanese companies. Last week, two judgments against Mitsubishi Heavy Industries were handed down. This brings to 12 the total of Korean court victories for former conscripted laborers and others.

Last week “conscripted laborer statues” were placed in Seoul and Inchon in parallel with the increasing momentum to erect “comfort women” statues.  President Moon’s speech is in harmony with the recent trend in Korean society. It is “raking over the old ashes” of an issue which, like that of the “comfort women,” had been settled. Korea has once again unilaterally confronted Japan over historical issues.

Further, he declared that “military action against North Korea cannot be decided upon without the agreement of South Korea.” President Moon’s speech has to be taken as a case of playing to South Korean public opinion and burdening Japan with the newly raised issue of conscripted labor.  As such it is a direct anti-Japanese statement.

On August 14th, some regular city buses in Seoul started carrying plastic replicas of the “comfort women” statues. The 14th was said to be “World Comfort Women Day” in commemoration of former “comfort woman” Kim Hak-sun (1924-1997) first going public with her story on August 14, 1991.

The mayor of Seoul, who rode on a bus carrying a comfort woman statue, has been very busy participating in “performances” against the Japan-Korea agreement on this issue. In a public area in the center of Seoul, a group supporting former “comfort women” set up 500 gold colored replicas of the statues, something that can only be described as a bizarre sight. 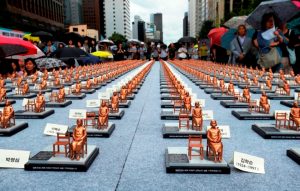 Given the question of how to deal with the outbursts from North Korea, one can only wonder what South Korea is trying to do by ignoring the tense situation.