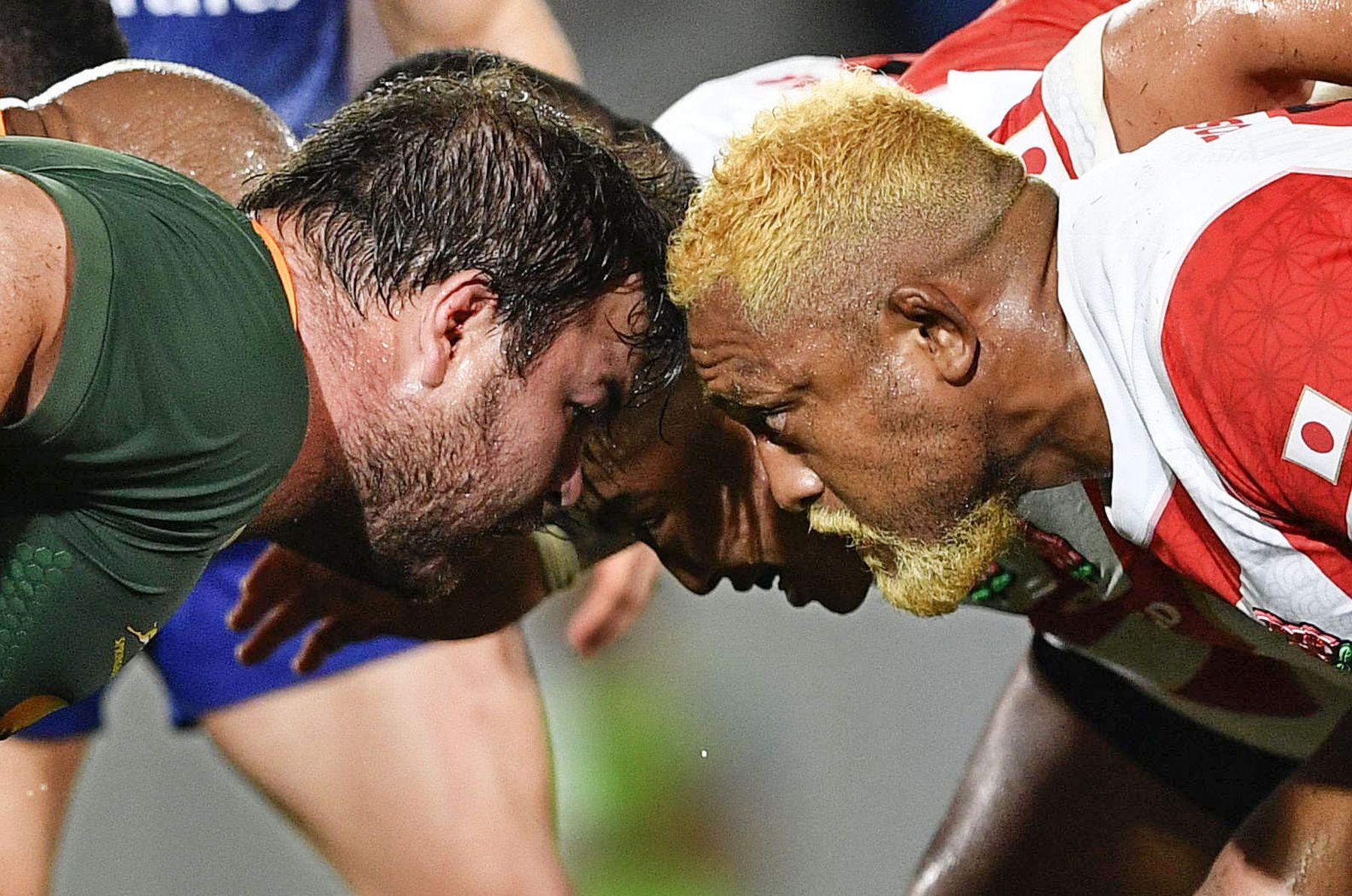 Japan’s high hopes to reach the knockout stage in the upcoming Rugby World Cup 2019 were dented by a 7-41 loss to powerful South Africa on September 6 at Kumagaya Rugby Stadium in Saitama Prefecture.

The Springboks thereby gained a measure of revenge for perhaps the greatest upset in rugby history, the “miracle at Brighton,” when the South African team fell 32-34 to the Cherry Blossoms in a classic nail-biter at the last world cup in England in 2015.

Nevertheless, the final tune-up for the big event had a silver lining as it showed Japan’s team what it needs to do to be ready for its opening World Cup match against Russia on Friday, September 20, at Tokyo Stadium.

The Game at Kumagaya Stadium 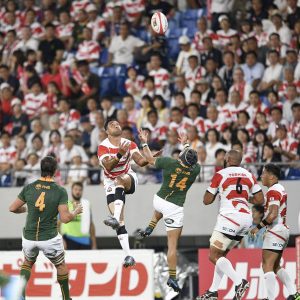 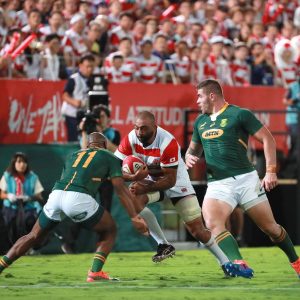 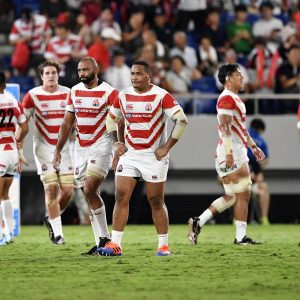 From the kickoff, the South Africa side moved the ball at a torrid clip against a Japan side that had just finished first at the Pacific Nations Cup in July/August — where it won all three of its matches. However, the Springboks who came to Kumagaya were of an entirely different caliber from the teams the Cherry Blossoms had faced in the PNC.

When the Japanese players sought to speed up their offensive attacks, South Africa’s hard tackling prevented them from advancing the ball. Even with rucks, confident in their physicality, the Springboks would commit a minimum number of players, while consolidating their next-phase defense.

While Japan was able to control the ball for the majority of the time, the Springbok defense remained impregnable. Repeatedly counter-attacks by the Brave Blossoms broke down or they lost the ball, by penalties, fumbling or having it stolen by their opponents.

Japan turnovers in turn repeatedly led to tries by their opponents. The end result was that during the first half, Japan’s heralded offense was completely contained.

Taking a Hard Look at the Mistakes

At the press conference following the match, Fighting Blossoms head coach Jaimie Joseph identified the reasons for the loss and looked towards the World Cup.

“We created a lot of opportunities for us to score, but, through small mistakes, the opposition really punished us,” Joseph admitted. “Still, the scrum functioned well and this match [with a strong side] was great preparation for us, exactly what we needed going into the World Cup.”

He added that whereas the teams Japan beat in the PNC were all Tier 2 teams ranking out of the Top 10, South Africa is ranked No. 5 in the world. Therefore, what worked at the PNC will simply not be enough to win against such top-flight opponents.

South Africa proved such a formidable opponent, not just because they were physical and fielded a coolly efficient defense.

Whereas in the past South Africa had been known among rugby powerhouses for its orthodox style of play, at Kumagaya it took to the air in a big way with a constant barrage of kicks. That kept Japan’s back three pinned down, and largely limited the play area to Japan’s backyard.

Adding to Japan’s woes was the fact that star flying wing Kenki Fukuoka was forced out of the match at only the four-minute mark of the first half with an injury to his right leg. That meant that his replacement, Ataata Moeakiola, had to deal with kicks in a role he was unaccustomed to.

Preparing for the Next Game

Although in terms of the score the Kumagaya tussle was a crushing defeat, captain Michael Leitch was looking to the future.

“We got beaten,” he said, “but now we know what we need to do. We got mauled because we let down in handling this or that detail. So as for what needs to be changed in the future, we need to pay attention to those details.”

Leitch added: “But this match brought home to us once again how impressive and strong Tier 1 teams are. It was a great match in terms of getting us ready for the World Cup.”

The details that Leitch was referring to include things like getting there one step faster on defense, or shaving a second off the timing of a pass. Those are the things that the Brave Blossoms need to work on. Whereas their abilities regarding such details seemed to do the trick at the PNC, they proved inadequate against a strong South African side.

Turning things around in short order might appear to be a herculean task, but Leitch remained confident, saying, “We can make a lot of changes…before the World Cup begins.”

If all team members work together to fine tune things, Japan may well be able to give teams of South Africa’s stature a run for their money.

Finding Hints for the World Cup 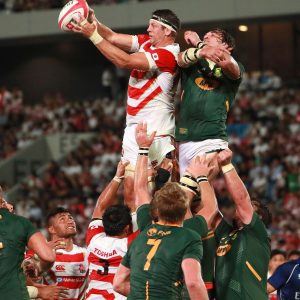 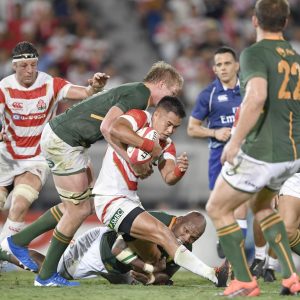 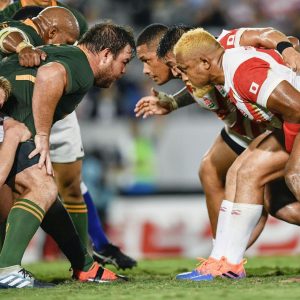 South Africa and Japan compete in a the 2019 Rugby World match.

Luke Thompson (LO), who can boast having appeared in the past three World Cups, evaluated the loss this way: “The precision of our play was hardly perfect. South Africa is big and strong, quite a team. So, it was a great experience for us.”

He added that they picked up a lot of hints on how to contend with Ireland and Scotland, powerful opponents in their World Cup group.

Other teams participating in the World Cup are also likely to take lessons from the way South Africa dismantled Japan’s game. As captain Leitch put it: “Without a doubt, that will happen. That’s why we need to get ready by ironing out the details.”

The Brave Blossoms seem confident that they have what it takes to make the necessary adjustments. The team has increased its ability to make necessary adjustments to details, thanks to the strategy devised since Joseph’s appointment as head coach in the fall of 2016 and the shared consciousness of team play instilled through shared activities and training since the team roster was announced in February 2019.

Whether the team slogan “One Team” can be translated into improvement on the pitch will be the key to whether or not the team can turn its 7-41 thrashing into a credible run for the knockout round at the World Cup.