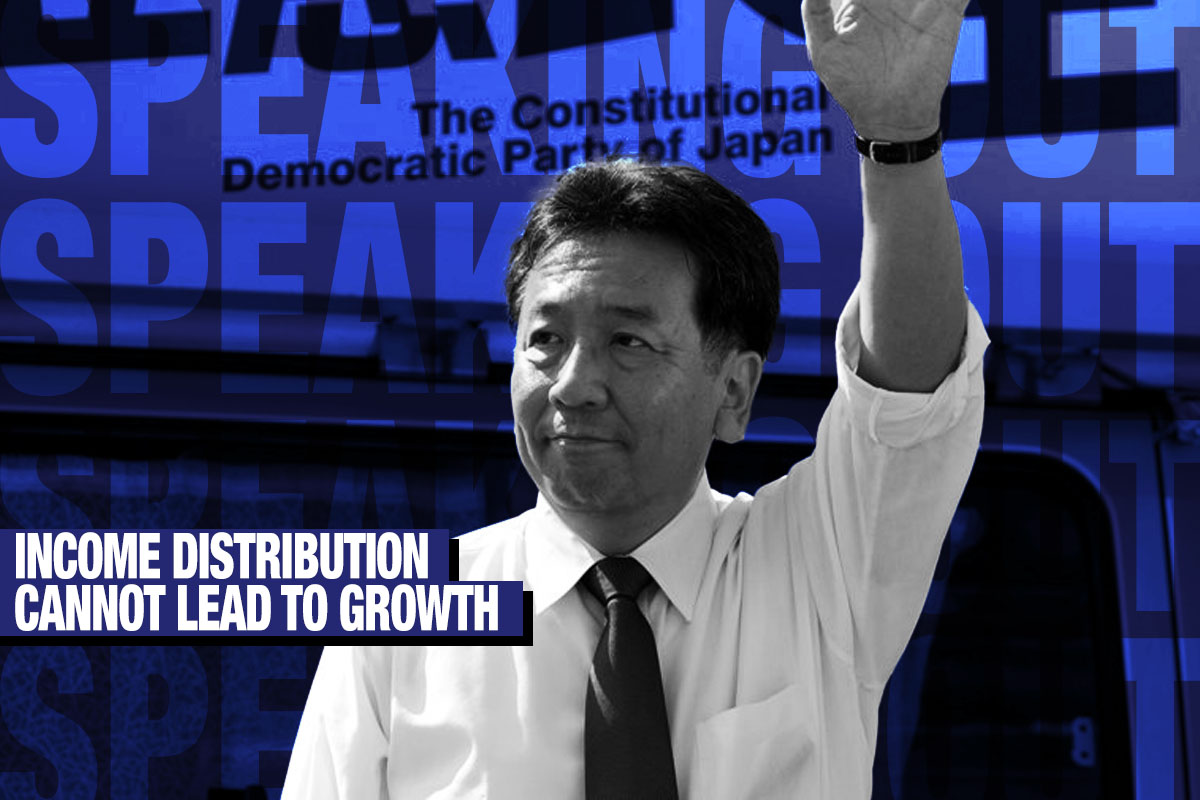 Yukio Edano, leader of the Constitutional Democratic Party of Japan (CDP), the largest opposition group, has adopted a slogan “no growth without distribution.”

A key economic policy issue for Japan’s October 31 general election of the House of Representatives is a difference between the ruling and opposition parties’ stances on economic growth and income distribution.

Only Growth can Expand the Pie

Which should come first, economic growth or income distribution?

As far as economics is concerned, it is clear that economic growth should come first. This is because an economic pie or gross domestic product (GDP) as added value can expand only through economic growth based on innovation.

If income distribution comes first it affects the efficiency of resources distribution, and the economic pie may shrink instead of expand. The virtuous cycle of growth and distribution can be achieved only if a pie exists for distribution.

Japan’s long economic stagnation is mainly attributable not to an expansion of the income gap, or deflation meaning moderate price falls, but to a decline in economic potential. That decline occurs when labor productivity growth and potential growth (growth excluding the impact of economic cycle) continue a downtrend.

Japan’s hourly labor productivity ranks 21st among the 37 members of the Organization for Economic Cooperation and Development (OECD). Moreover, it has remained low since 1970.

Its potential economic growth stayed above 4% in the asset-inflated bubble economy period until around 1990, but plunged later. It has remained below 2% since the burst of the bubble economy.

Therefore, while income redistribution to narrow income gaps is important, the current Japanese economic situation indicates that top priority should be given not to the distribution of the economic pie, but to economic growth policy to expand the pie.

Income Gaps are Not Expanding

CDP leader Edano has emphasized the expansion of income gaps as the reason for giving priority to income distribution. But workers’ share of national income exceeded a long-term trend level, reaching 52.2% in the second quarter of 2021. Before that, it had been leveled off for nearly three decades.

The income redistribution Gini coefficient, which indicates a distribution bias, has followed a slow downtrend since 2005, falling back to the 1990 level in 2017.

Clearly, the special cash payment during the COVID-19 pandemic last year has expanded outstanding household financial assets. It has been found that only some 30% of the payment was spent.

The Bank of Japan would purchase government bonds from private sector banks, allowing funds to flow back to the government. This would make debt-ridden economic management easier and mitigate any economic crisis perception, encouraging the government to avoid any strong economic growth policy or painful structural reform.

I hope a new government would give top priority to an innovation-based economic growth strategy rather than any easy income distribution or fiscal and monetary policy.

(A version of this article was first published by the Japan Institute for National Fundamentals, Speaking Out #840 on October 21, 2021 in English, and on October 18 in Japanese.)

Yujiro Oiwa is a Planning Committee member and a senior fellow at the Japan Institute for National Fundamentals. He is a former professor of economics at the Tokyo International University.