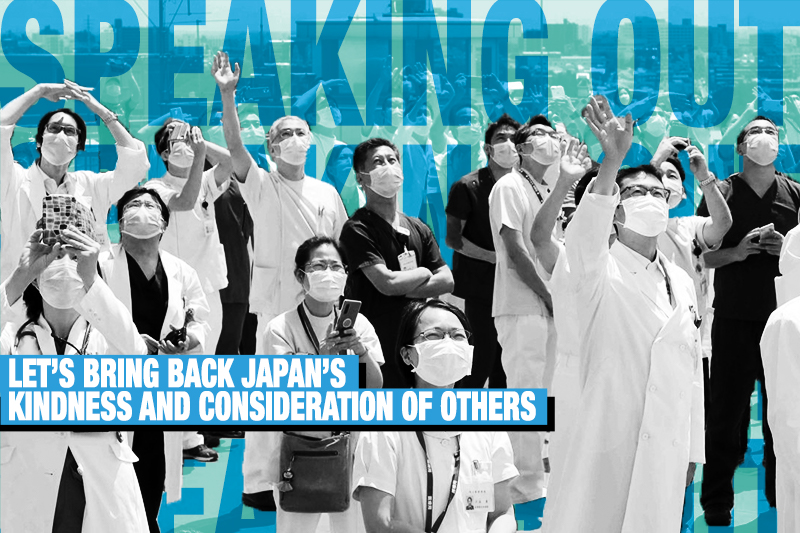 After Prime Minister Shinzo Abe declared a state of emergency in April, Japanese people acted in a remarkable manner. The government declaration was not legally binding or backed by penalties. It consisted only of requests, reflecting the current Japanese constitution’s spirit of implying that a country is an evil entity confronting its people and should not be given even minimum muscle.

Despite this non-obligatory framework, most Japanese people fully embraced the requests made by the prime minister and behaved in a quintessentially Japanese way. As a result, Japan could overcome the first wave of the Wuhan virus outbreak in some 50 days.

The excellent results owe to Japan’s long-standing altruism and morality. The ancient Japanese tale of Princess Oto Tachibana who threw herself into the waters to quell the sea-god’s anger more than tells us of the inseparability of love and sacrifice.

Even in the face of the power and wrath of mother nature, Japanese have always shown concern for others in their thoughts and actions.  When the March 2011 Great East Japan Earthquake devastated northeastern Japan, Japanese people retained their composure and behaved in an orderly and cooperative manner with each other. It was quite natural for Japanese people, but the rest of the world watched and wondered how Japanese were able to keep from pushing and stampeding for food and other aid.

The sense of responsibility and the spirit of altruism are steadfastly within us and are what allowed us to overcome the first wave of the novel coronavirus. Since early July, however, the daily number of newly confirmed virus infection cases in Japan has remained hundreds, concentrating in Tokyo.

On Fuji Television’s Sunday news program titled “The Prime” on July 26, Tokyo’s Shinjuku Ward Mayor Kenichi Yoshizumi said that the average positive rate of PCR (polymerase chain reaction) tests for the novel coronavirus at night clubs and other establishments in Shinjuku’s Kabukicho nighttime entertainment district was an astonishing 45.9% in the first half of July.

Tokyoites and other Japanese must rightly recognize this terrible reality. According to some statistics, more than 70% of newly confirmed infections are in those younger than 40. It is often said that young people are more likely to be asymptomatic if infected, but at the same time long term aftereffects remain for some of them, such as lung disease.

Smart behavior and accurate information are two sides of the same coin. National and local governments have an obligation to provide the best possible information. This virus can be fought off if all generations share the information with each other and act responsibly.

Regulations with Teeth are Necessary

In the face of swift growth in the number of new cases and the rapid spread of infections from Tokyo to other parts of Japan, prefectural governors are demanding national legislation to enhance their enforcement power. The time has come to correct the abnormal situation in which national and local governments lack the authority to issue compulsory orders and enforce them. These reforms should be accelerated as a first small step to becoming a normal democracy in which the people do not view their country with hostility.

Tokyo has an abundance of wealth, convenience and intelligence, but isn’t it leaving behind the spirit of altruism in pursuit of entertainment? Tokyoites must understand that their rights and freedoms are dependent on responsible behavior that does not cause harm to others.

As Japan develops into a normal country in which the people and the nation support each other, perhapsーled by Tokyoites who are experiencing the highest number of infectionsーit is time to relearn those values that have long stood Japan in good stead.

(A version of this article was first published by the Japan Institute for National Fundamentals, Speaking Out #703 on July 29, 2020.)

Yoshiko Sakurai is President of Japan Institute for National Fundamentals and a freelance journalist.