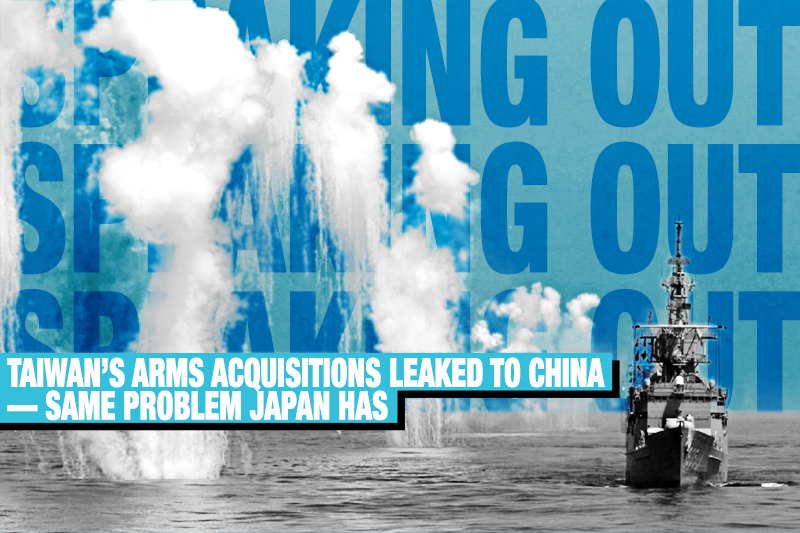 On May 20, when a ceremony was held for Taiwan President Tsai Ing-wen to enter her second term, the United States announced the sale of 18 torpedoes to Taiwan. They were MK-48 large guided torpedoes to be mounted on a submarine Taiwan plans to build.

Even one MK-48 is powerful enough to sink a destroyer. However, Taiwan’s possession of these torpedoes will not necessarily enhance its defense capabilities against Communist China. This is because it is believed that Taiwan’s military secrets are being leaked to China. Therefore, the U.S. is still cautious about providing Taipei state-of-the-art weapons.

Presence of Pro-China Elements in Taiwan and Japan

Japan and Taiwan are said to share the same destiny. But they also share vulnerability to Communist China’s penetration.

Pro-China elements in Japan consist of two groups. One emerged from Franklin D. Roosevelt’s “Four Policemen” scheme to govern the post-World War II world under the four veto-holding permanent United Nations Security Council members: the United States, the Soviet Union, the United Kingdom, and the Republic of China. The other hails from Chinese agents Mao Zedong sent to Japan after the breakout of the Korean War. Japan then had a pro-Beijing policy of securing a non-U.S. partner after its defeat to the U.S., which left it open to the presence of Chinese agents.

Taiwan also has two pro-Beijing groups. One stems from Chinese mainlanders (elites and military personnel) brought into Taiwan by Chiang Kai-shek. The other stems from Communist Chinese agents who entered Taiwan after the implementation of Chiang Ching-kuo’s policy of allowing Taiwanese to visit relatives in continental China.

From the time family visits were allowed in the late 1980s, retired senior officers of the Taiwanese army have frequently visited continental China for the nominal purpose of attending alumni reunions of graduates from the Whampoa Military Academy (founded by Sun Yat-sen). There, they have interacted with active or retired generals of the People’s Liberation Army, heard lectures by the Communist Party of China general secretary, and sung China’s national anthem.

Darkness of the La Fayette Scandal

The so-called La Fayette scandal refers to the formidable effect of the infiltration of two pro-Beijing (anti-Taiwan) groups into Taiwan. The scandal occurred when Taiwan purchased six La Fayette-class frigates from a French munitions company in 1993 for the sum of $2.65 billion USD. At the same time, Singapore also bought six ships, but paid only $1.25 billion USD, half of what Taiwan was charged. Moreover, Taiwan had to pay an extra $2 billion USD for weapons for the frigates it had purchased because the weapons had been delivered instead to Communist China, along with 56 boxes of La Fayette blueprints, in exchange for Beijing’s tacit approval of the deal.

Taiwan’s payments were doubled compared to the Singaporean deal in order to generate kickbacks. China used the blueprints from France to build frigates of the same type and still operates them. As a result, the performance of major weapons in Taiwan is well known to Communist China.

In the wake of this scandal, more than 10 individuals, including some French nationals, have died under suspicious circumstances. According to Andy Chan, a Taiwanese living in the U.S. who investigated the scandal, Taiwan’s Navy has been put under the influence of the Green Gang secret society (a secret society and criminal organization said to be based in mainland China), and the bodies of those who died were disposed of in the Green Gang style. Those suspicious deaths remain unsolved, and no one has been punished.

It is difficult to prevent the infiltration of Communist China. But prevention of the loss of secrets is an important issue for the rest of the world. Japan, as well as Taiwan, should make a whole-of-government effort to prevent the leak of highly classified and confidential information.

(A version of this article was first published by the Japan Institute for National Fundamentals, Speaking Out #684, on May 28, 2020.)