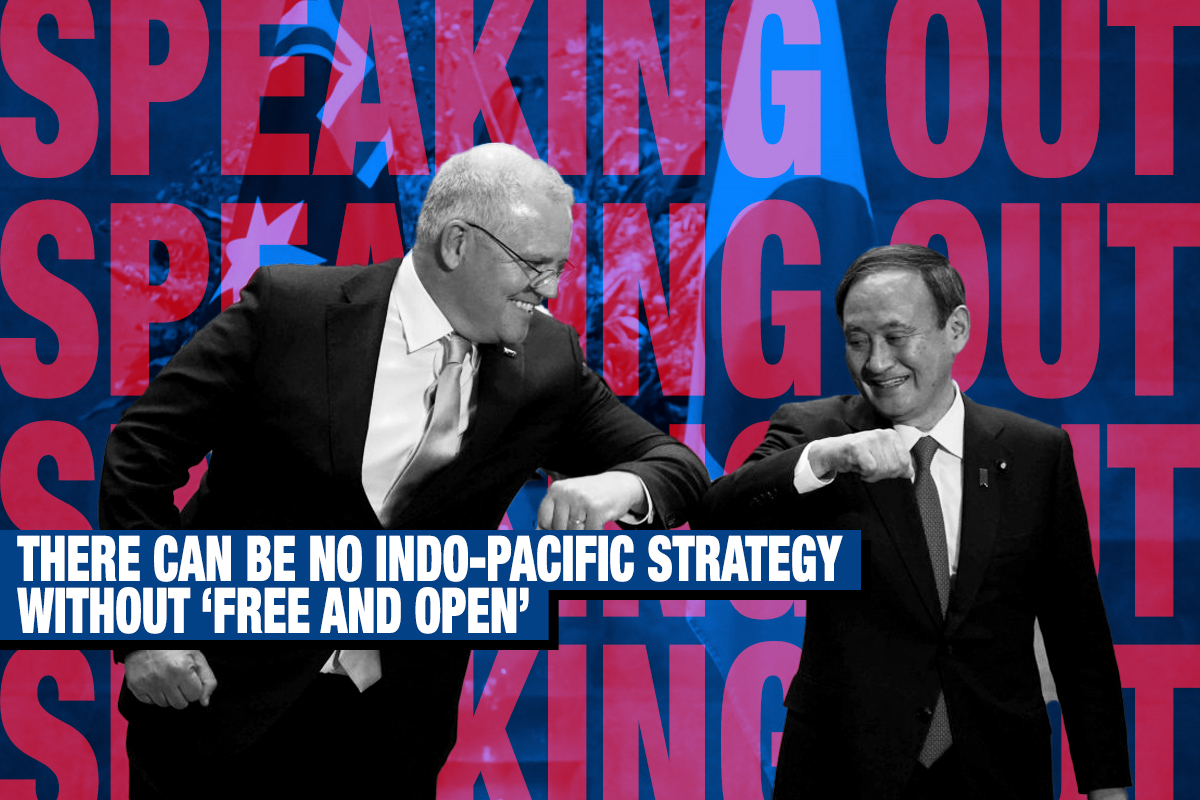 For the Indo-Pacific, “Free and open” is an indispensable keyword. Without the  keyword, the concept may become soulless.

A remark by Japanese Prime Minister Yoshihide Suga to the press after an online meeting with the leaders of the Association of Southeast Asian Nations on November 14 created a ripple. He mentioned a “peaceful and prosperous Indo-Pacific” instead of a “free and open Indo-Pacific” that Japan has advocated.

In a political bid to contain such a Chinese diplomatic attitude with  “freedom” and “openness,” then- Japanese Prime Minister Shinzo Abe launched a “free and open Indo-Pacific” in 2016. By emphasizing universal values such as freedom and democracy, he led cooperation with like-minded countries. This approach can be appreciated as a value-oriented type of diplomacy that has not been seen before in Japan.

If “free and open” is replaced, however, with “peaceful and prosperous” to preface the Indo-Pacific, a simple geographic concept of the region may be left with no significant values.

“Free and open” is an indispensable keyword. Without the  keyword, the concept may become soulless. Being unable to accept these universal values, China has been opposed to the concept of a “free and open Indo-Pacific.” The  revised phrasing is likely to please only China.

The revised phrasing immediately came under fire in Japan. Embarrassed  by the unintended outcome, Chief Cabinet Secretary Katsunobu Kato at a press briefing and Foreign Minister Toshimitsu Motegi at a parliamentary session explained that the government’s policy of promoting a “free and open Indo-Pacific” remains unchanged. A joint statement by Prime Minister Suga and his  Australian counterpart Scott Morrison on their talks on November 17 restored the concept of “free and open.”

However, separate from the domestic explanation, the problem is how Suga’s remark was interpreted by the rest of the world. Just as some in Japan are concerned that U.S. President-elect Joe Biden could take a conciliatory attitude toward China, some in the United States have similar suspicions about the Suga administration.

Why did Suga make such a blunder? Did he do it in consideration of ASEANー that does not want to irritate China? Or was he influenced by Biden, who has not used the phrase of “free and open”?

In fact, some foreign policy advisers in the Biden transition team are reluctant to use the phrase adopted by the Trump administration. At a time, while the forthcoming Biden administration’s Indo-Pacific policy is still undecided, the team may be cautious about the terminology. If Japan ceases to use the keyword “free and open,” however, it could be taken as a Japan’s step back, after having made a conciliatory move toward China.

Bureaucrats should be held responsible for preparing the misleading and ill-considered remark for Suga without understanding the strategic meaning of the Abe-advocated phrase. However, it is even more important that Suga himself show he can pursue coherent diplomacy based on principles.

(A version of this article was first published by the Japan Institute for National Fundamentals, Speaking Out #739 on November 26, 2020.)

Masahiko Hosokawa is a professor at Meisei University and a former  director-general of the Trade Control Department at Japan’s Ministry of Economy,  Trade and Industry. He is also a Planning Committee member at the Japan  Institute for National Fundamentals.