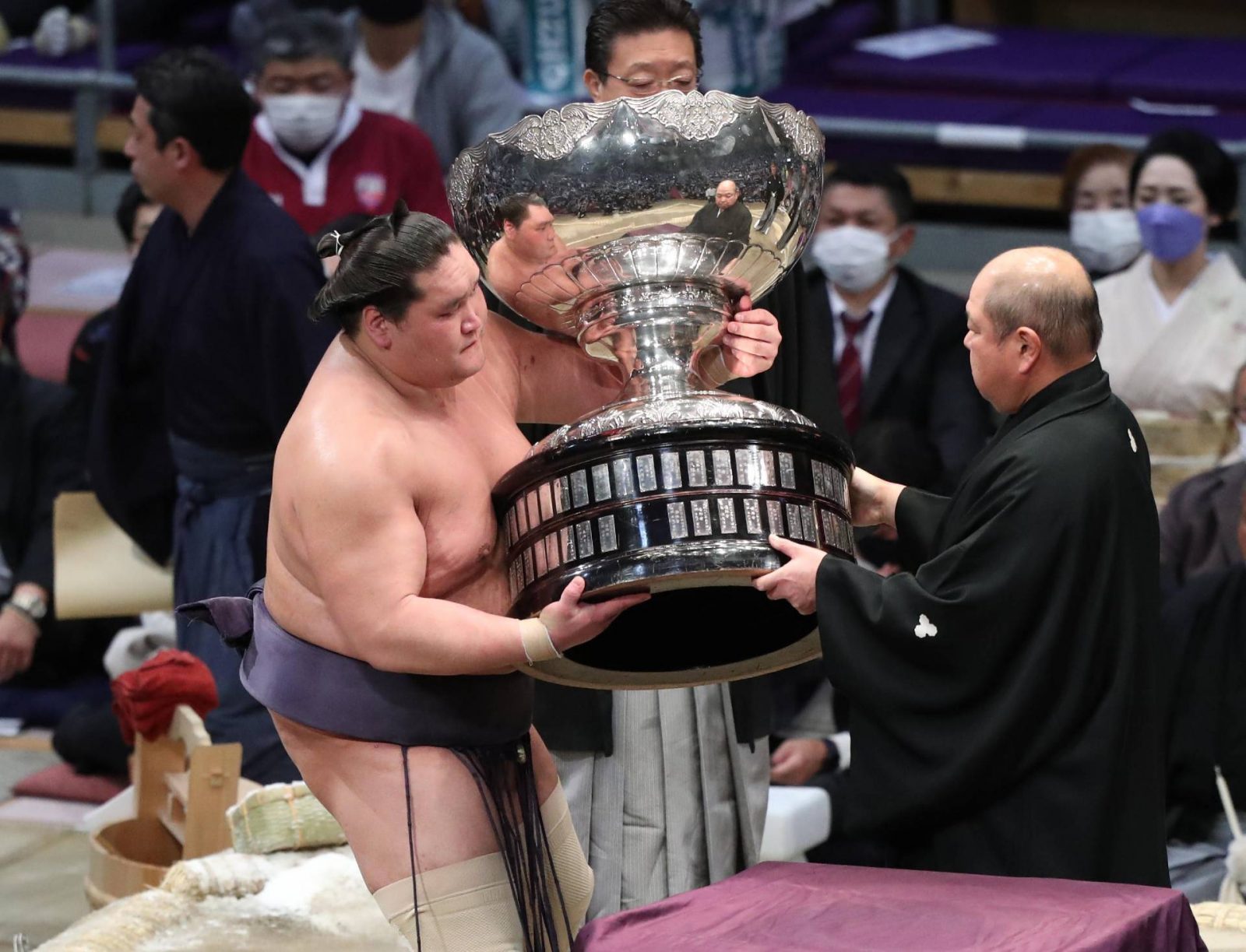 Yokozuna Terunofuji wrapped up the year with back-to-back titles, including the Kyushu Grand Sumo Tournament in Fukuoka.

One day after wrapping up his sixth Emperor’s Cup, Terunofuji was pushed back by Takakeisho shortly after the face-off but quickly recovered to shove his opponent out in the day’s final bout at Fukuoka Kokusai Center. Takakeisho dropped to 12-3.

“I was able to fight with confidence,” Terunofuji said. “I’ve never won with a perfect record before so I am so happy I was able to achieve it. I didn’t think too much about it but just tried to do my best. I tried to utilize my big body and use it to my advantage.”

It was a fitting end to what has been a spectacular year for the 29-year-old Terunofuji, who won his second straight title since being promoted to the sport’s highest rank.

He secured the Emperor’s Cup with a win over Abi on Saturday and was gunning for his first “zensho yusho,” or perfect record championship, on Sunday.

Terunofuji was promoted to the sport’s highest rank in July, then won the September tournament in his debut as yokozuna for his fifth title overall.

His promotion to grand champion capped an epic comeback for Terunofuji, who wrestled at the sport’s second-highest level of ozeki before injuries to both knees saw him fall into the fifth-tier jonidan division in March of 2019.

“I’ve had big goals in mind but never did I imagine that I would achieve this much,” said Terunofuji, who will turn 30 on Monday, November 29. “I don’t want to think about my age too much. I’ll just continue to set big goals for myself in 2022.”

In other major bouts, sekiwake Mitakeumi completed his impressive Kyushu campaign when he bulldozed ozeki Shodai out to improve to 11-4. It was not a strong showing for Shodai, who finished at 9-6.

No. 2 maegashira Takanosho overwhelmed Abi with a series of arm thrusts to improve to 11-4 and secure one of the tournament’s two Fighting Spirit Prizes.

“I knew right before the bout I could win the prize if I won, so I was a bit nervous,” Takanosho said. “I knew Abi is strong so I just decided to be aggressive and go on the attack from the outset.”

Abi fell to 12-3 but won the tournament’s other Fighting Spirit Prize for his impressive results that included challenging Terunofuji for the title.

Elsewhere, No. 15 maegashira Chiyomaru wrapped up a winning record and improved to 8-7 with an overarm throw against seventh-ranked maegashira Ura.

Ura, who took home the tournament’s Technique Prize, finished with a strong 10-5 record and impressed fans with his variety of unorthodox winning techniques.

Sekiwake Meisei took advantage of a superior face-off and forced out Mongolian-born Ichinojo to earn his seventh win against eight losses. Komusubi Ichinojo could only manage a 5-10 record and will be falling down several ranks for the next tournament.

No. 12 maegashira Hokutofuji closed out his successful Kyushu campaign with a force-out win over No. 7 Chiyoshoma (8-7) to improve to 11-4.

Popular fourth-ranked maegashira Endo also wrapped up a winning record of 8-7 when he shoved out Kaisei, a No. 17 maegashira who fell to 7-8.

Mongolian Hoshoryu finished the tournament in style when he used a textbook overarm throw to send Takarafuji sprawling to the dirt surface.

Fifth-ranked maegashira Hoshoryu finished at 7-8 while fourth-ranked Takarafuji closed out with a 5-10 record.

Top maegashira Wakatakakage overpowered Tobizaru (7-8) to secure a winning record of 8-7 with a frontal shove out. Tobizaru, sumo’s flying monkey, lived up to his name when he ended up in the spectator seats after flying off the dohyo.

Daieisho, also a top maegashira, finished on a high note when he swatted down No. 12 Ishiura to improve to 8-7. Ishiura fell to 7-8.

Mongolian Kiribayama finished his debut tournament at komusubi with a frontal force out of Tamawashi to post his sixth win against nine losses. It wasn’t the result that Kiribayama was hoping for but he was facing sterner competition as a komusubi. Sixth-ranked maegashira Tamawashi finished at 9-6.

Earlier Sunday, Ichiyamamoto won the juryo division title with a 13-2 record to ensure promotion back to the elite makuuchi division for the next tournament.

First Star: Terunofuji. With his first ever “zensho yusho,” it doesn’t get much better for Terunofuji who is clearly ready to usher in a new era in the absence of yokozuna legend Hakuho who retired this year.

Second Star: Takanosho. With a win over Abi on the final day, the No. 2 maegashira ensured that he will be moving up the ranks for the New Year Basho in January.

Third Star: Wakatakakage. The top maegashira turned in an impressive performance against Tobizaru on the final day to secure a winning record.