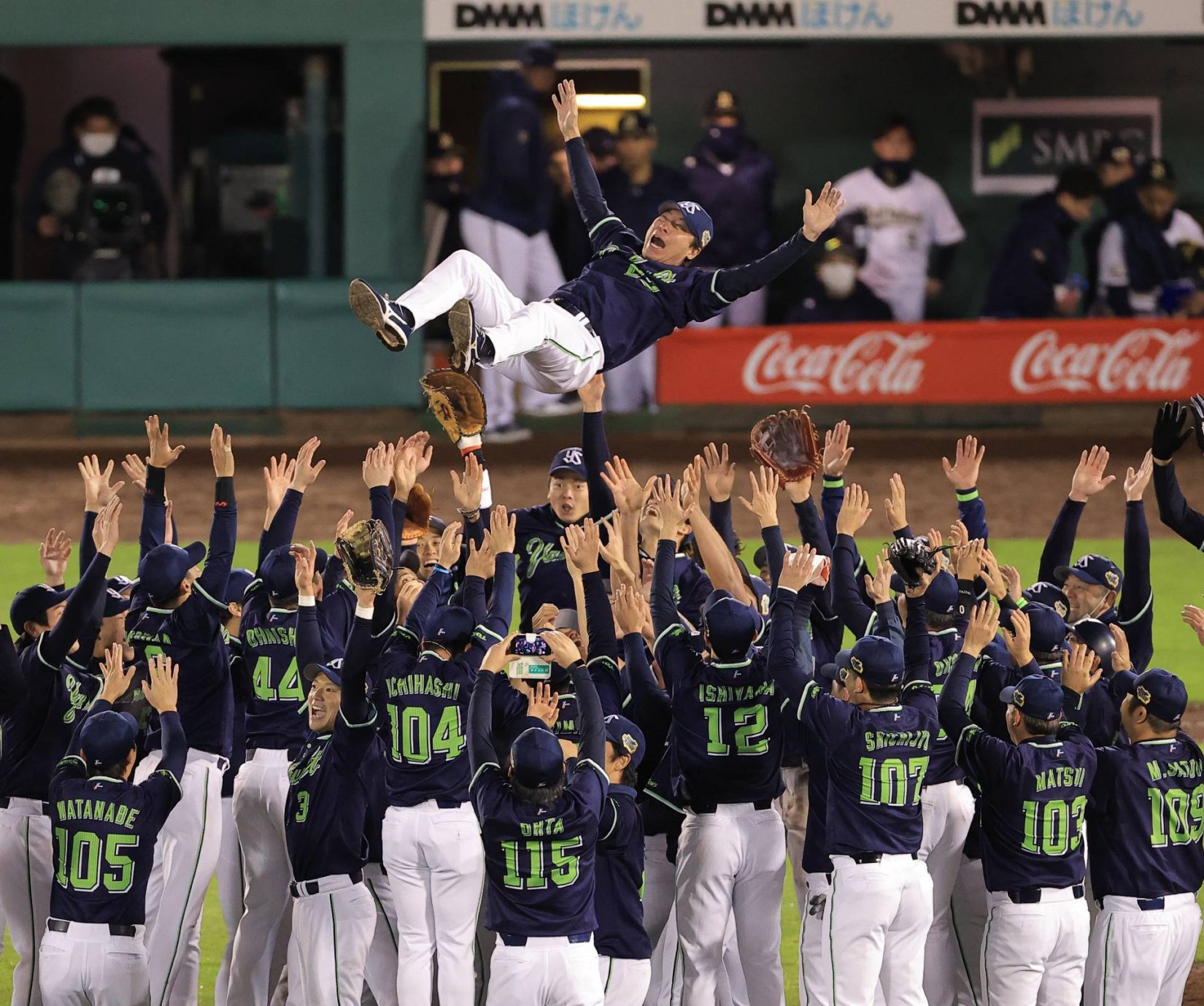 From worst to first to Japan Series champions.

Shingo Kawabata drove in the winning run on a pinch-hit single to left with two outs in the 12th inning as the Tokyo Yakult Swallows beat the Orix Buffaloes 2-1 on Saturday, November 27 to win their first Japan Series championship in 20 years.

After finishing dead last in the standings last season, Yakult made a remarkable turnaround this year, capturing the Central League pennant and winning the best-of-seven series four games to two for the sixth championship in franchise history.

“I relied on him all season long,” Yakult manager Shingo Takatsu said of veteran Kawabata. “He didn’t get all of it but he really hung in there and it was a great at-bat.”

It was another stellar performance by Orix ace Yoshinobu Yamamoto who struck out 11 Yakult batters and gave up one run, one walk on six hits over nine innings. He finished with 141 pitches.

“We knew the chances against him would be limited,” Takatsu said of Yamamoto, who also started Game 1 for Orix. “We just waited it out and everyone did a great job.”

Takatsu, a former closer, paid tribute to his pitching staff as well. Hirotoshi Takanashi started and held Orix to one run on four hits over 4⅔ innings while striking out seven.

Closer Scott McGough earned the win after striking out four and holding Orix scoreless over the final 2⅓ innings.

Swallows catcher Yuhei Nakamura was named Japan Series MVP. He was credited for his solid hitting (a team-best .318 average against the Buffaloes) and for leading the pitching staff in the Japanese Fall Classic.

"My teammates gave me a lot of support and I want to thank everyone around me," Nakamura said. "I'll do my best to help the team win the Japan Series again next year."

Game 6, which lasted five hours, was played at Hotto Motto Field Kobe and was the first game of the series to be played outdoors. It was a chilly night with most of the players wearing neck warmers and long sleeves.

Yakult took the lead in the top of the fifth.

Jose Osuna hit a single to center and advanced to second on a sacrifice bunt and then scored on a single to left by Shiomi.

A strong throw from left fielder Masataka Yoshida would have beaten the runner but it was cut off by third baseman Yuma Mune and Osuna scored easily.

The Buffaloes came right back to tie the game in the bottom of the fifth.

With Kenya Wakatsuki on second, Shuhei Fukuda hit a bloop single over the head of the third baseman scoring Wakatsuki.

Both the Buffaloes and the Swallows finished last in their respective leagues last season. The Buffaloes haven’t won a Japan Series championship since 1996 when they were known as the Orix BlueWave.

The Swallows last won the Japan Series in 2001 when they beat the Buffaloes.

“It was a tough season, a difficult one in many ways,” Takatsu said. “We’re happy to end it on a winning note and I really want to thank our fans for sticking with us during these difficult times.”

It was a close series with every game except one ー a 2-0 win for Yakult in Game 2 ー decided by one run.

While Orix had the stellar pitching of Yamamoto, Yakult countered with more clutch hitting. Shiomi was 2-for-4 in Game 6 while Osuna was 3-for-5.

Veteran Norichika Aoki hit a double to left in the 10th inning. He took part in the post-game celebrations and was visibly emotional in what may be his final game.

It would be the perfect way for the 39-year-old outfielder to go out after a professional career that started with Yakult way back in 2004 and included stints with seven major league teams.