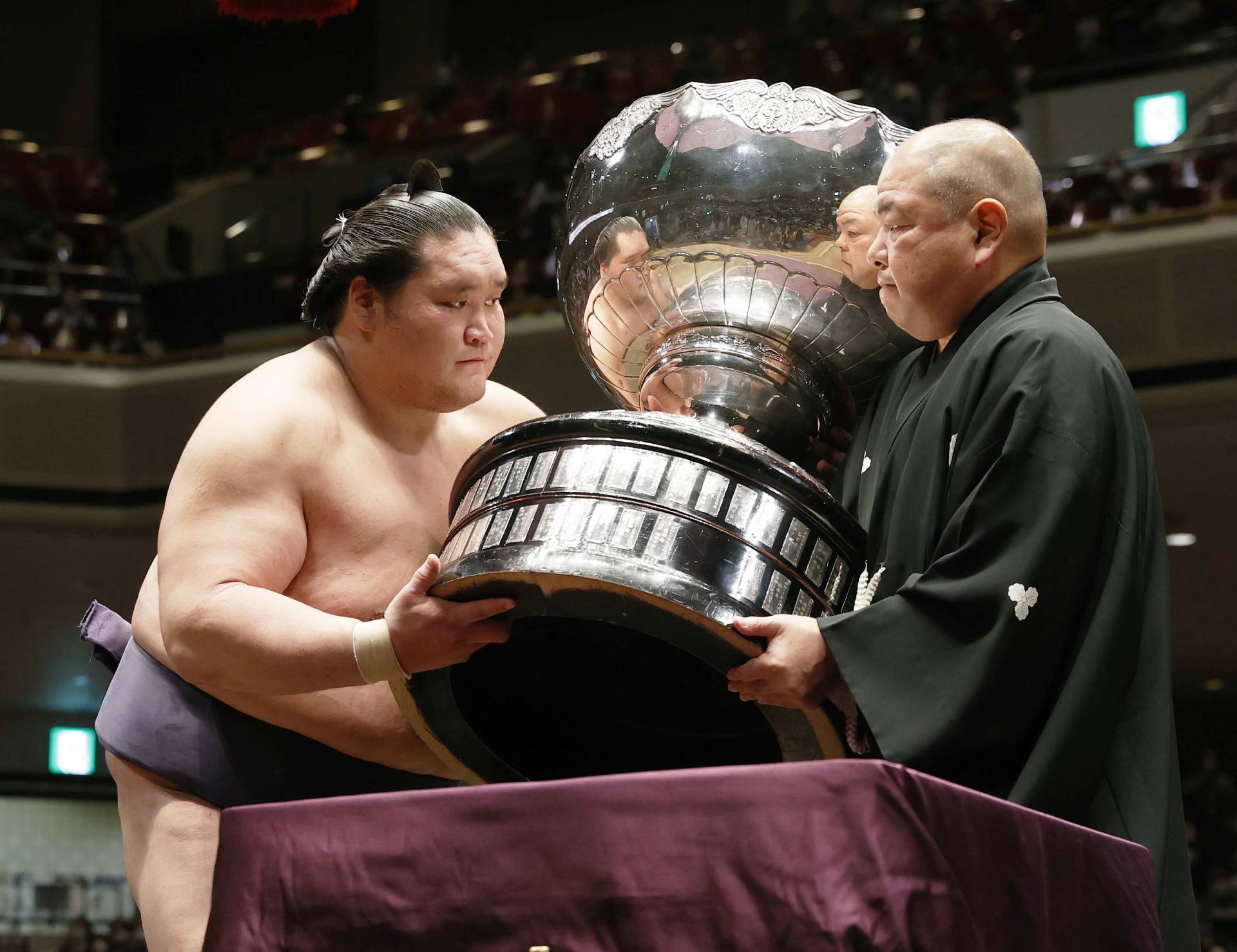 Yokozuna Terunofuji is the center of attention after winning his fifth career title on September 26 at Ryogoku Kokugikan.

With the title already secured, new yokozuna Terunofuji overpowered ozeki Shodai on the final day of the Autumn Grand Sumo Tournament to put the finishing touches on his championship-winning debut at the sport’s highest rank.

Mongolian Terunofuji got a double-handed grip on the belt of Shodai shortly after the face-off and bulldozed his opponent out to complete the tournament with an impressive 13-2 record and secure his fifth championship on Sunday, September 26.

Shodai, who was unable to mount much of a challenge in the day’s final bout at Ryogoku Kokugikan, finished with an 8-7 record.

“I’m glad that I gave it my all,” Terunofuji said shortly after accepting the hardware. “I just wanted to focus on each individual day and try not to get ahead of myself. Before I got to the venue today I was ready for whatever could happen and I was able to do everything I could.”

Terunofuji became the 73rd grand champion in July after going 14-1 in the Nagoya tournament.

With fellow grand champion Hakuho sitting out the tournament after two of his stablemates tested positive for the coronavirus, Terunofuji was the odds-on favorite going into the Autumn Basho.

However, there were questions about his knees which he had surgery on. But he held up well and won his third tournament of the year with relative ease.

His only losses came at the hands of lower-ranked wrestler Daieisho and sekiwake Meisei.

“I didn’t want to overthink things,” Terunofuji said. “I think it’s the job of a sumo wrestler to show the fans that you are doing your best everyday. I’m appreciative of the fact that I could win the tournament in my debut at yokozuna.”

The title was decided about 10 minutes before Terunofuji entered the ring when new sekiwake Meisei easily defeated Myogiryu, the only other wrestler still in contention, in the third-to-last bout to take some drama out of the proceedings.

Meisei used an under-shoulder swing down to dispatch Myogiryu in a matter of seconds and dash any title hopes the 10th-ranked maegashira might have had.

Meisei improved to 8-7 while Myogiryu, who claimed the tournament’s Technique Prize, fell to 11-4.

In the day’s penultimate bout, sekiwake Mitakeumi overpowered ozeki Takakeisho with a series of arm thrusts to close out with a 9-6 record.

Having already wrapped up the winning record he needed to maintain his ozeki status, Takakeisho didn’t put up much resistance and fell to 8-7.

Both ozeki finished with 8-7 records, a result that won’t please sumo officials as more is expected of those at the sport’s second-highest rank.

In other major bouts, fourth-ranked maegashira Daieisho forced out Ichinojo with several powerful thrusts to improve to 10-5. Daieisho was awarded the tournament’s Outstanding Performance prize, in part due to his win over Terunofuji.

Mongolian komusubi Ichinojo closed out with an 8-7 record.

Third-ranked maegashira Wakatakakage won his fifth straight bout when he swatted down Chiyonokuni shortly after the face-off to give both wrestlers a 9-6 record.

Second-ranked maegashira Kiribayama hoisted No. 16 Chiyomaru (8-7) up and over the straw ridge to finish at 9-6.

Ninth-ranked maegashira Hidenoumi used a twisting motion to bring down Hoshoryu and pick up his seventh win against eight losses.

Top maegashira Hoshoryu, who missed two days due to tonsillitis, finished the tournament with a 5-8-2 record.

Mongolian No. 4 maegashira Tamawashi (6-9) used a barrage of arm thrusts to send Onosho out over the edge in a one-sided bout. Onosho, who was in title contention up until Day 14, fell to 10-5.

Further down the ranks, No. 11 maegashira Endo deployed an arm throw of Okinoumi to finish with a record of 11-4. No. 8 Okinoumi dropped to 10-5.

First Star: Terunofuji. It doesn’t get any better than winning the title in your yokozuna debut and the new grand champion deserves all the accolades.

Second Star: Meisei. Even though he took some drama out of the final day, Meisei came up big against an opponent who had everything to fight for.

Third Star: Endo. With an impressive 11-4 record, the No. 11 maegashira will be moving up the ranks for the next tournament in November.