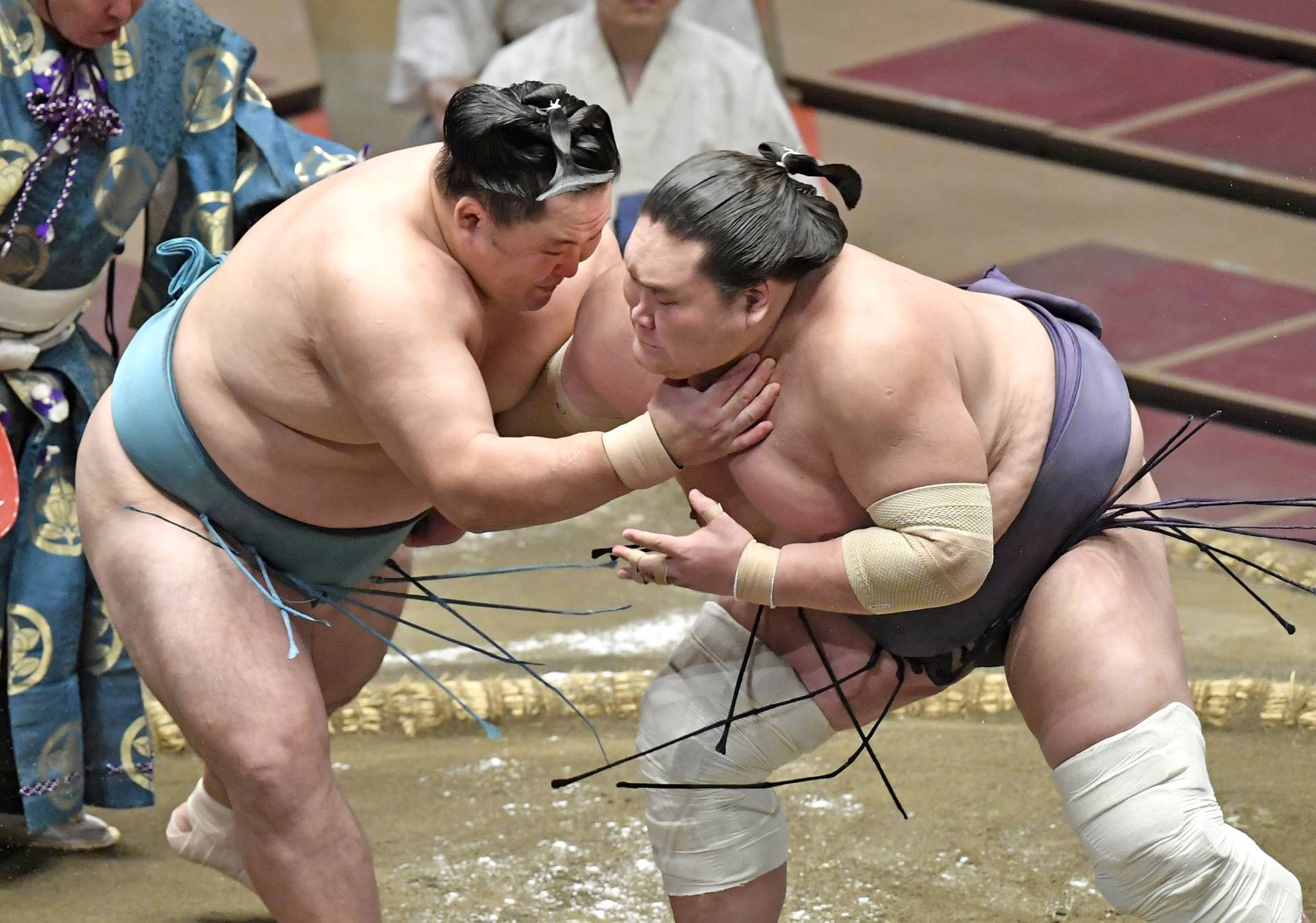 Maegashira No. 4 Tamawashi (left) and yokozuna Terunofuji square off at the Autumn Grand Sumo Tournament on September 19.

Terunofuji survived his biggest scare of Autumn Grand Sumo Tournament on Sunday, September 19 when he was pushed to the brink by Tamawashi before recovering to remain undefeated at the midway point of the 15-day tourney.

Terunofuji, the lone yokozuna competing in the Autumn Basho, was shoved back to the edge when his Mongolian compatriot used an arm thrust to the neck in the day’s final bout at Ryogoku Kokugikan.

But showing incredible composure, the grand champion got both hands on the belt of the No. 4 maegashira and shoved him out to improve to 8-0. Tamawashi dropped to 3-5.

With fellow grand champion Hakuho sitting out the tournament after two of his stablemates tested positive for the coronavirus, Terunofuji is the clear title favorite.

The 29-year-old became the 73rd yokozuna in July after he went an 14-1 in the Nagoya meet and appears well on his way to going one better in this meet.

Elsewhere, veteran grappler Myogiryu, a No. 10 maegashira, stayed very much in contention for the title and improved to 7-1 when he used a frontal force out to send Chiyonoo over the straw bales.

In the day’s biggest upset, up-and-comer Kotonowaka used an outside right-hand arm throw at the edge to stun ozeki Shodai, who dropped to 5-3.

Shodai started out well and appeared to be in control but Kotonowaka, who is just 23, quickly turned the tables and dispatched Shodai to improve to 3-5 with his first-ever win over an ozeki.

“I was able to observe my opponent well and I had a feeling I could use that throw at the edge,” Kotonowaka said. “I knew I couldn’t use any tricky moves against an ozeki so I just went straight at him. It’s a huge confidence booster for me.”

Takakeisho, who needs a winning record in this tournament to maintain his ozeki status, swatted down fourth-ranked maegashira Daieisho (5-3) to even his record at 4-4.

In an all-sekiwake showdown, Mitakeumi stayed two wins off the pace at 6-2 when he used a hand pull down technique to defeat Meisei, who fell to 3-5.

Hoshoryu, the nephew of former yokozuna Asashoryu, returned from a bout of acute tonsillitis and was forced to fight giant Mongolian compatriot Ichinojo twice after their first bout ended in a rare draw.

Hoshoryu appeared to have won the first bout with an arm throw of the massive 206-kg Ichinojo but the ringside judges determined that both men hit the dirt surface at the same time.

In the rematch, top maegashira Hoshoryu finally prevailed with a frontal force-out to improve to a record of two wins, four losses and two days absent. Komusubi Ichinojo dropped to 3-5.

Fifth-ranked maegashira Chiyoshoma finally got his first win when he dodged to his side at the face-off and took komusubi Takayasu down with an arm throw. The struggles continued for Takayasu, who saw his record fall to an unflattering 3-5.

Top maegashira Takanosho, a former sekiwake, used a frontal pushout to beat Kiribayama and improve to 4-4.

No. 2 maegashira Kiribayama had a stellar first half of the tournament with wins over two ozeki, a sekiwake and two komusubi but has now lost two in a row and dropped to 5-3.

Further down the ranks, No. 17 maegashira Chiyonokuni bounced back from the previous day’s loss to Endo when he deployed several powerful arm thrusts to quickly dispatch Kotoeko to improve to 6-2. No. 11 maegashira Kotoeko fell to 2-6.

Veteran Okinoumi also stayed within striking distance of the lead when he came bursting out of the face-off and shoved Chiyotairyu out in a matter of seconds.

Fan favorite Endo also improved to 6-2 when the No. 10 maegashira bundled out No. 7 Shimanoumi, who dropped to 3-5.

In a showdown of two unorthodox wrestlers who have a flair for the dramatic, No. 6 maegashira Ura used a frontal thrust down to defeat Tobizaru.

After both wrestlers hesitated at the face-off, Ura eventually forced eighth-ranked maegashira Tobizaru to the edge where he forced him out to give both wrestlers a 4-4 record.

First Star: Kotonowaka. With a big upset over ozeki Shodai, rising star Kotonowaka is hands down the day’s No. 1 star.

Second Star: Myogiryu. The No. 10 maegashira ensured the tournament still has some drama with a clutch victory to stay one win back of Terunofuji.

Third Star: Hoshoryu. After coming off a bout of tonsillitis, Hoshoryu was forced into double duty to beat Mongolian behemoth Ichinojo.