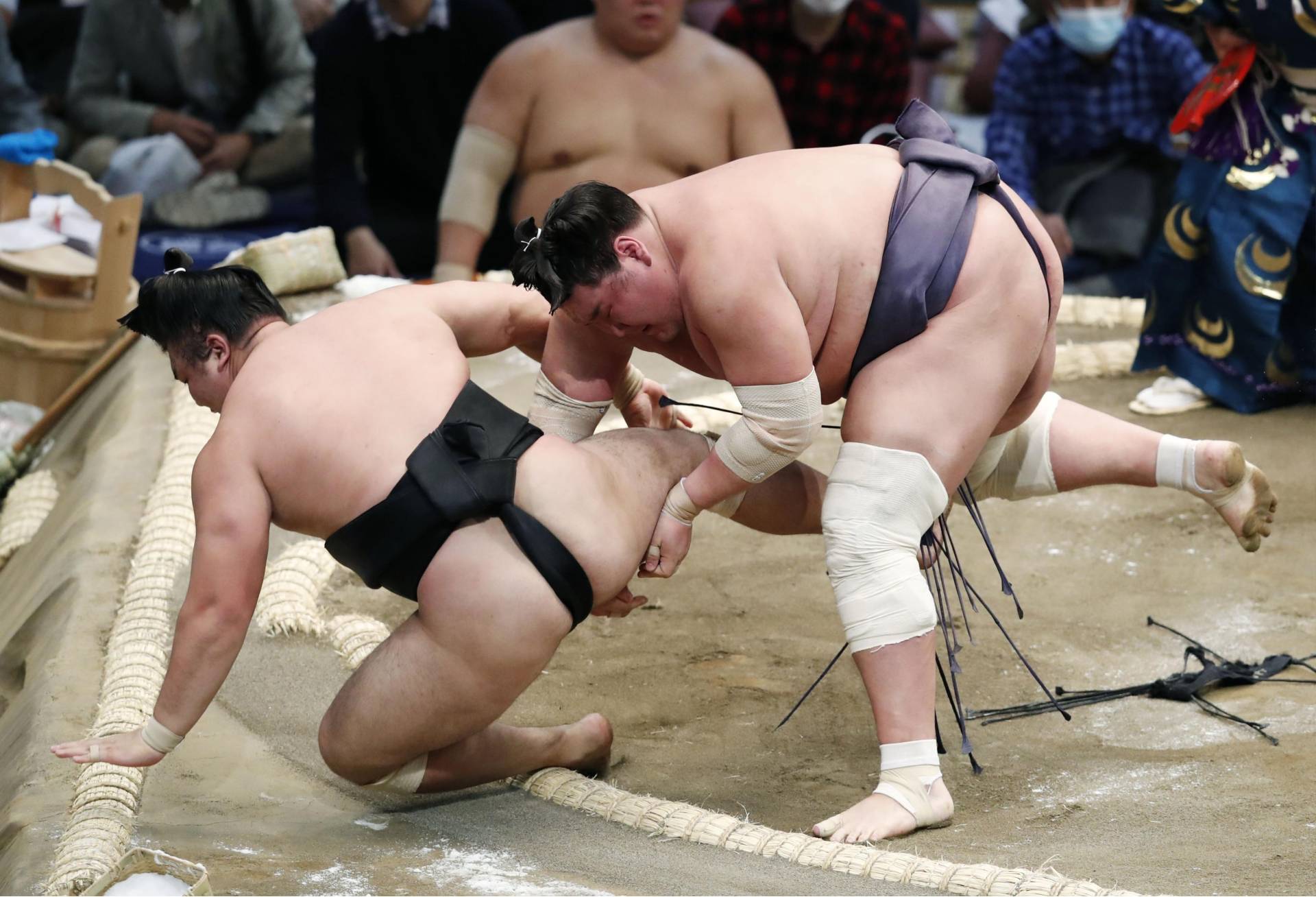 Yokozuna Terunofuji defeats Kiribayama on the first day of the Kyushu Grand Sumo Tournament on November 14 at Fukuoka Kokusai Center.

Terunofuji kicked off his reign as the sole yokozuna with a hard-fought victory over Mongolian compatriot Kiribayama on the opening day of the Kyushu Grand Sumo Tournament on Sunday, November 14.

Terunofuji won his fifth Emperor’s Cup in his debut at the sport’s highest rank in September’s Autumn Basho and is looking to follow that up with another title in Fukuoka.

But his first win of the November meet did not come easily as newly promoted komusubi Kiribayama came charging out of the face-off and quickly got a right overarm belt hold to ensure it wouldn’t be an easy bout for his opponent.

But Terunofuji got a brief grip on the belt of Kiribayama and attempted an arm throw before finally disposing of the determined komusubi with a rare “komatsuki” technique in which a wrestler uses an over thigh scooping body drop.

Terunofuji posted an impressive 13-2 record in his debut at the sport’s highest rank in the September tournament for his first title as a yokozuna and fifth overall.

It won’t get any easier for the big Mongolian.

Terunofuji will face Daieisho on Day 2. Daieisho was one of only two wrestlers who beat Terunofuji in the September tournament.

Top maegashira Daieisho, who won the New Year tournament, came bursting out of the face-off and used a powerful arm thrust to the neck to stun Shodai and send the ozeki out over the straw ridge.

“I was able to do my brand of sumo and am content with the win,” said Daieisho, who notched his 400th career victory. “I hope to keep making progress by just sticking to the basics.”

Ozeki Takakeisho kicked off his November tournament on a winning note when he swatted down top maegashira Wakatakakage.

Like Shodai, Takakeisho could only manage an 8-7 record last time out and will be looking for better things in this tournament.

Elsewhere, Takanosho celebrated his 27th birthday with an upset win over sekiwake Meisei. No. 2 maegashira Takanosho forced Meisei to the edge when he used a thrusting down technique to pick up the win.

Meisei beat Terunofuji in the September meet and expectations are high for him at the Kyushu Basho.

Mongolian komusubi Ichinojo, the heaviest wrestler in the top division, used a frontal force out to send third-ranked maegashira Okinoumi over the straw ridge.

Sekiwake Mitakeumi came bursting out of the face-off and used a left-hand outside grip to send No. 2 maegashira Onosho over the edge in a matter of seconds with a frontal force out.

Further down the ranks, fifth-ranked maegashira Hoshoryu kicked off his Kyushu campaign on a winning note when he deployed a textbook arm throw to send No. 8 Shimanoumi toppling to the dirt surface.

Hoshoryu’s uncle is former yokozuna Asashoryu. Like his famous relative, Hoshoryu has impressed sumo fans with his unorthodox techniques, speed and relentless attacks.

Ura went into his usual bag of tricks when he came in low at the face-off and grabbed the leg of Tamawashi to topple the sixth-ranked Mongolian.

Seventh-ranked maegashira Ura is not one to rely on bread-and-butter techniques. The unorthodox grappler has executed 29 different winning techniques in his career in the makuuchi division.

No. 5 maegashira Takayasu and Endo needed an extra bout after their first match ended in a rare draw. In the second bout, Takayasu used a frontal force out to dispatch popular fourth-ranked maegashira Endo.

Former grand champion Hakuho, who retired in September, was in attendance on Day 1, performing security duties at Fukuoka Kokusai Center as part of his transition to the position of a stable master.

First Star: Terunofuji. Faced with a stern challenge from upset-minded Kiribayama, the lone yokozuna didn’t blink and came through with a performance worthy of a grand champion.

Second Star: Daieisho. With an upset win over ozeki Shodai, top maegashira Daieisho proved he means business in the Kyushu meet and will get another shot at an upset against Terunofuji on Day 2.

Third Star: Takayasu. After a hugely disappointing autumn campaign, Takayasu served notice that is aiming for better results in Kyushu with a hard-fought win over Endo in a rematch after the first bout was ruled a draw.