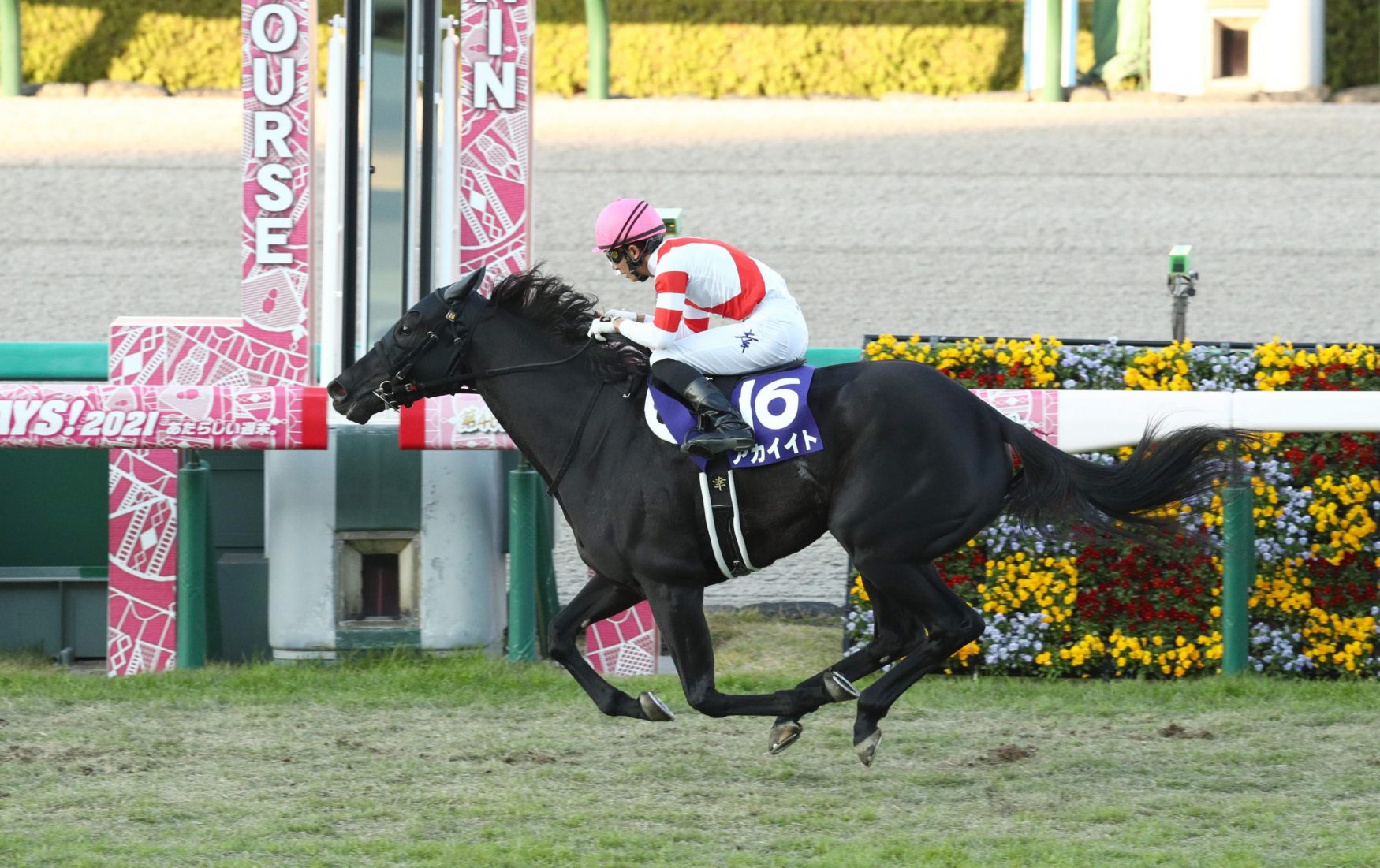 Hideaki Miyuki rides Akai Ito to a two-length victory in the Queen Elizabeth II Cup at Hanshin Racecourse on November 14.

Akai Ito, ridden by Hideaki Miyuki, closed out the race with a tremendous display of speed to win by two lengths over her blood relative in 2 minutes, 12.1 seconds in Takarazuka, Hyogo Prefecture.

The 4-year-old overcame a slow start in the 2,200-meter race to earn her first Japan Racing Association Grade I victory.

After finishing seventh at the G2 Fuchu Himba Stakes on October 16, Akai Ito rebounded with an upbeat performance on Sunday, giving Miyuki his eighth career G1 victory and Nakatake his third. (See the video of the race here.)

Soft Fruit (Mirai Iwata) took fourth, by a neck’s length, followed by Izu Jo no Koseki (Ryuji Wada) before an announced crowd of 5,909 two weeks before the Japan Cup, a big-purse (¥300 million JPY, or about $2,86 million USD) to the winner), 2,400-meter extravaganza, is held at Tokyo Racecourse.

Tenno Sho (Autumn) winning-jockey Takeshi Yokoyama, who rode Efforia to victory on Halloween, finished 16th aboard Win Marilyn, who faded down the stretch.

Miyuki was delighted that his training methods worked.

“As she seemed to be a bit tense when I trained her the other day, I tried to race her in her own rhythm,” said Miyuki, who is No. 9 on the JRA’s 2021 jockey win list (73) through Sunday.

How was this accomplished aboard the 10th pick in a crowded field?

“Though I could not break her smoothly out of the gate, I was able to eventually race her in the intended position at the backstretch. I was confident that she would stretch well at the end and, because it was a G1 race, I made a bid earlier than usual. We were able to take the front earlier than I had expected and, as there was no horse right behind us, I just kept on urging her to go until [the finish].”

That strategy paid off.

Over the final three furlongs, Akai Ito’s time of 35.7 seconds was the fastest.

As a result, Miyuki and Akai Ito were able to successfully rebound from a relatively slow start, including a late break out of stall 16.

Shamrock Hill and Rose Armour, who placed 15th and 17th, respectively, were 1-2 after the first turn as the early pacesetters.

Akai Ito, meanwhile, remained near the back of the pack for most of the race before turning it up a notch, especially over the final three furlongs (about 603 meters).

With a gutsy inside move past Akaitorino Musume, Akai Ito was able to climb toward the front of the pack before a burst of speed clinched the upset victory.

Akaitorino Musume, winner of the Shuka Sho at the same track on October 17, wound up in seventh place.

In the 17-horse field, nearly one-third of them were siblings, with six being Deep Impact-sired horses.

In addition, Kizuna, father of three in the race, was sired by Deep Impact.