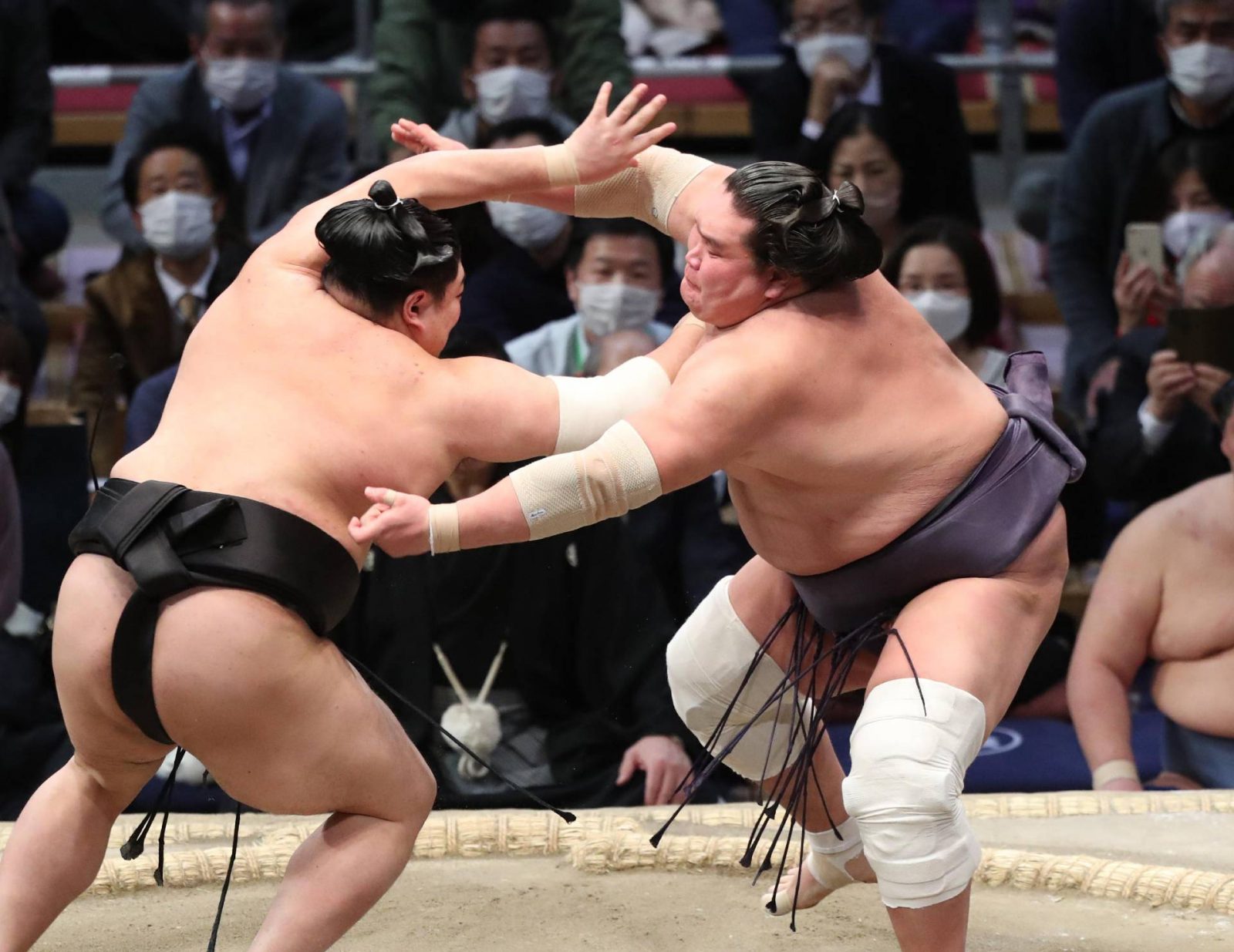 Yokozuna Terunofuji (right) grapples with Abi at the Kyushu Grand Sumo Tournament on November 27 in Fukuoka.

Lone yokozuna Terunofuji defeated rank-and-filer Abi on Saturday, November 27 to win his second straight title at the sport’s highest rank and sixth overall with one day to spare in the Kyushu Grand Sumo Tournament.

In the day’s final bout at Fukuoka Kokusai Center, Terunofuji was pushed back to the edge by the upset-minded No. 15 maegashira but then used a push-down technique to topple his opponent and improve to a perfect 14-0. Abi dropped to 12-2.

“I wasn’t thinking about my opponent’s rank and was just going for the win,” Terunofuji said. “He had the momentum at first and I just tried to do everything I could to stop him.”

The victory caps an impressive year for Terunofuji in which he won three championships.

He was promoted to the sport’s highest rank in July then won the September tournament in his debut as yokozuna for his fifth title overall.

In August, he gave up Mongolian nationality and acquired Japanese citizenship.

His promotion to grand champion capped an epic comeback for Terunofuji, who wrestled at the sport’s second-highest level of ozeki before injuries to both knees saw him fall into the fifth-tier jonidan division in March 2019.

“When I got demoted to the lower divisions, I learned how important it is to stay mentally strong,” Terunofuji said.

Even though he lost, it has been an impressive showing for Abi.

In July 2020, Abi was found to have repeatedly broken the Japan Sumo Association’s Covid guidelines both before and during the tournament in that month.

He was suspended for three tournaments and received a 50% pay cut for five months and contemplated leaving the sport altogether.

In other major bouts, Takakeisho thrust out fellow ozeki Shodai to improve to 12-2. Shodai stands at 9-5.

Sekiwake Meisei used a frontal push out to defeat Ura and pick up his sixth win against eighth losses. Ura was completely overwhelmed by his opponent and dropped to 10-4.

No. 2 maegashira Takanosho wrapped up double-digit wins when he dispatched ninth-ranked Hidenoumi to improve to 10-4. Hidenoumi fell to 8-6.

Top maegashira Wakatakakage moved a step closer to a winning record when he dodged to his side shortly after the face-off and shoved out fourth-ranked Endo to give both wrestlers a 7-7 record.

No. 12 maegashira Hokutofuji thrust down Ichinojo to improve to 10-4.

It’s been a disappointing meet for komusubi Ichinojo, who dropped to 5-9 likely meaning he will fall down a rank for the next tournament.

In a showdown of two Mongolians, Hoshoryu used a frontal force out to send Kiribayama toppling off the raised ring. No. 5 maegashira Hoshoryu improved to 6-8 while Kiribayama fell to 5-9 and, like Ichinojo, will lose his komusubi status in the New Year tourney.

First Star: Terunofuji. With a clutch win over Abi, Terunofuji did what even the great yokozuna Hakuho wasn’t able to accomplish in his illustrious career: winning his first two tournaments at the rank of yokozuna.

Second Star: Takakeisho. The ozeki wrestler temporarily kept his title hopes alive with a clutch win over fellow ozeki Shodai, but his hopes to defend his title from a year ago in this tournament were dashed when Terunofuji defeated Abi.

Third Star: Takanosho. The No. 2 maegashira will be moving up the ranks for the New Year tourney in January thanks to his impressive showing in this tournament.