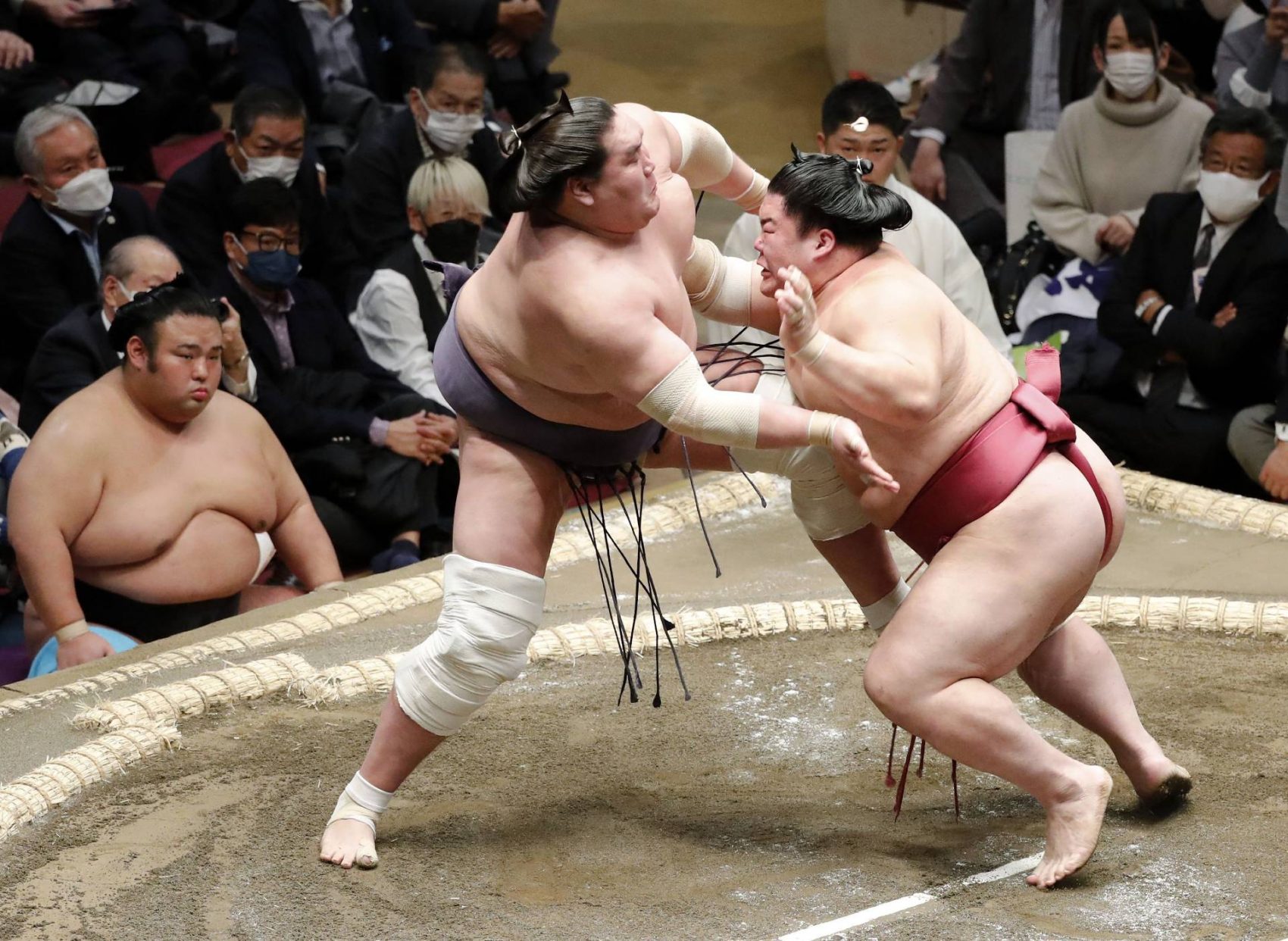 Yokozuna Terunofuji grapples with komusubi Daieisho on the first day of the New Year Grand Sumo Tournament on January 9 at Ryogoku Kokugikan.

Yokozuna Terunofuji fought off a spirited challenge by Daieisho on Sunday, January 9 to post an opening-day win at the New Year Grand Sumo Tournament.

Komusubi Daieisho went on the attack from the outset in the day’s final bout at Ryogoku Kokugikan when he sent Terunofuji back to the edge of the ring with several powerful arm thrusts to the neck.

But Mongolian-born Terunofuji kept his poise and eventually maneuvered Daieisho to the edge, where he swatted the upset-minded grappler down to notch a hard-fought win.

Terunofuji is bidding to win a third straight Emperor’s Cup for the first time in his career.

He was promoted to sumo’s highest rank in July of 2021 and then won the September and November tournaments.

In other major bouts, ozeki Shodai, looking to improve on his 9-6 record from the previous tournament, was pushed back to the edge by Kiribayama, but used an arm-lock throw to dispatch the top maegashira.

Mongolian Kiribayama had the upper hand for most of the bout and came close to upsetting Shodai, but was unable to finish his opponent off when he had a chance and paid the price.

Takakeisho made it a clean sweep for the ozeki wrestlers when he used his trademark pushing and thrusting technique to send top maegashira Wakatakakage backpedaling over the straw ridge.

Takakeisho won 12 bouts in the November tourney and was a contender right up until the final weekend.

Abi, who went an impressive 12-3 and contended for the title in the November meet, used several powerful arm thrusts to the neck of Takarafuji to send the No. 7 maegashira toppling off the raised ring.

No. 6 maegashira Abi was one of the few wrestlers to seriously challenge Terunofuji for the championship last time out, losing to the yokozuna on the penultimate day in Kyushu.

Hoshoryu, the nephew of former yokozuna Asashoryu, kicked off his New Year campaign with a win when he deployed a perfectly timed right leg kick to topple No. 5 maegashira Chiyoshoma.

Hoshoryu, a fifth-ranked maegashira, will be looking to improve on his 7-8 record from the November meet.

Mongolian behemoth Ichinojo, who weighs in at 206 kilograms, got a left-hand grip on the belt of Takanosho and hoisted the sekiwake out to post an opening-day win.

Ichinojo is a former komusubi who is fighting in this tournament at No. 2 maegashira.

Sekiwake Mitakeumi got both arms around Ura and shoved the No. 2 maegashira out in a matter of seconds to start the tournament with a win.

Mitakeumi went 11-4 in the previous basho and is among several wrestlers looking to challenge for the title this time out.

Further down the ranks, Oho, the grandson of legendary yokozuna Taiho and the son of former sekiwake Takatoriki, kicked off his debut in the elite makuuchi division with a win over Kaisei.

No. 18 maegashira Oho got his left hand under the arm of the 17th-ranked Brazilian grappler and thrust him out in a matter of seconds.

“I was a bit nervous but it was over in a flash,” said the 21-year-old Oho. “I want to fight my style of sumo so that I can move up the ranks.”

Wakamotoharu, the older brother of top maegashira Wakatakakage, also won in his makuuchi debut with a frontal force-out of Ichiyamamoto.

First Star: Terunofuji. Showing incredible poise under pressure, Terunofuji had to use every ounce of his abilities to thwart a determined effort by Daieisho.

Second Star: Daieisho. Even though he eventually lost, the komusubi wrestler gave the fans at Ryogoku Kokugikan a huge thrill with his spirited sumo that had everyone thinking upset. He walked off to a rousing ovation normally reserved for the winning wrestler.

Third Star: Oho. The 18th-ranked maegashira would have made his grandfather Taiho proud with a one-sided win over the larger Kaisei in his makuuchi division debut.