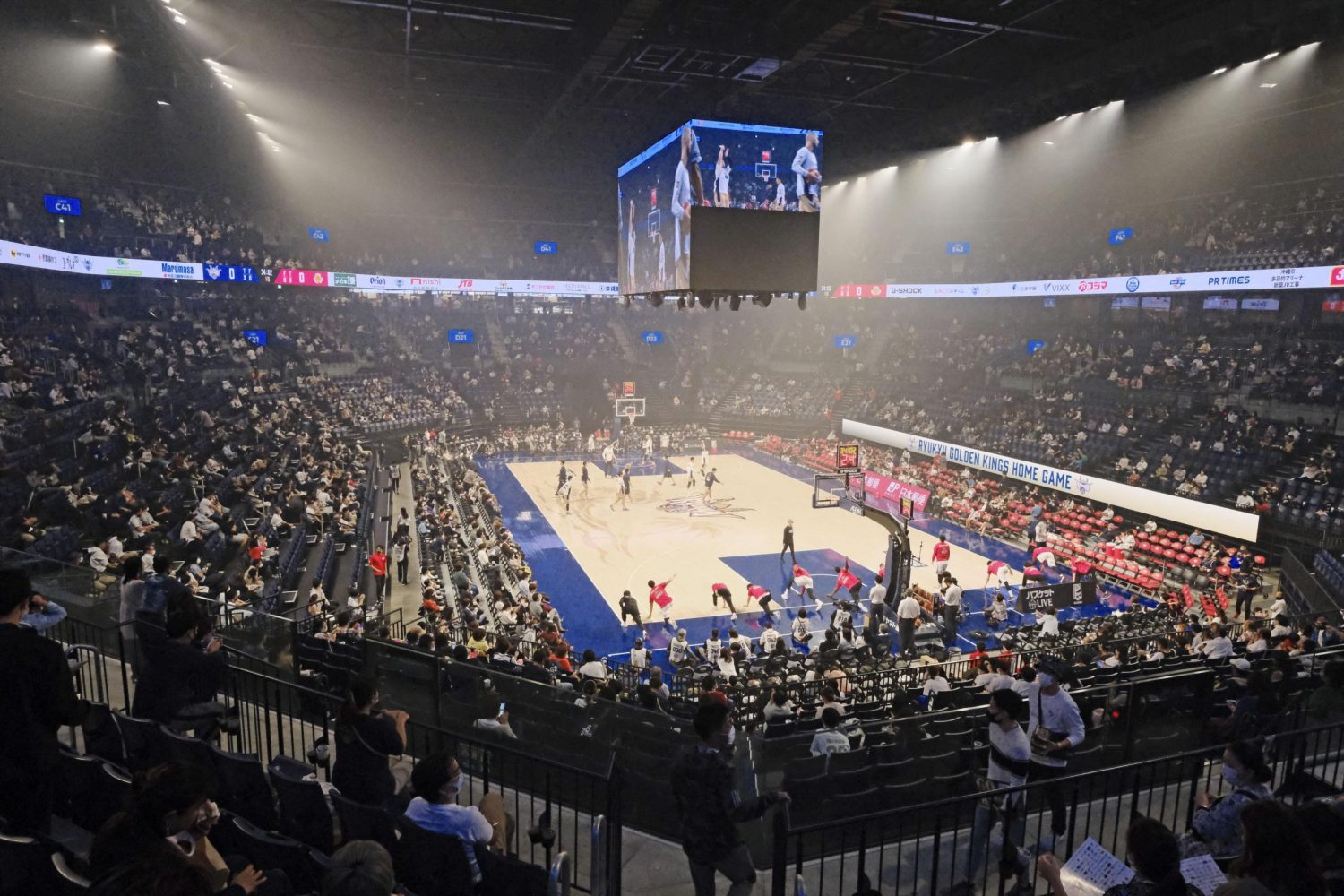 Okinawa Arena, home of the B. League's Ryukyu Golden Kings (B. LEAGUE)

The B. League All-Star weekend, a major promotional vehicle for Japanese pro basketball, will not be held for the second straight year.

Scheduled for January 14-15 at the state-of-the-art Okinawa Arena, which opened in 2021, this season’s midseason showcase was called off on Thursday, January 6 amidst a rapid increase in COVID-19 cases in Okinawa Prefecture in recent days and coronavirus clusters among some B. League teams.

“With the theme of ‘B. Style,’ we have a strong desire to energize the host city through the B. League All-Star Game,” B. League chairman Shinji Shimada said. “It is unfortunate that the event has been canceled for the second consecutive year. I am very sorry.”

The All-Star weekend was to include skills competitions, including the ever-popular Slam Dunk Contest, as well as an Asia Rising Star Game on January 14 and an Under-18 All-Star Game before the main event the next day.

As of 10 PM on Saturday, January 7, 16 of 22 B. League matches were canceled from January 8-10 due to positive COVID-19 cases among players and staff, including a reported 18 cases on the Hiroshima Dragonflies and nine on the Osaka Evessa.

Last year’s B. League All-Star weekend events were set to be held in Mito, Ibaraki Prefecture, in the same month. But plans changed due to the global pandemic.

In January, the Nippon Professional Baseball and soccer’s J. League are both in the offseason, giving basketball greater opportunities for media exposure.

As a result of Shimada’s announcement, comprehensive press coverage will be lost due to the canceled events in Japan’s southernmost prefecture.

The bj-league, one of two disbanded leagues that merged to create the B. League in 2016, held its first-ever All-Star Game in 2007 in Ginowan, Okinawa Prefecture. At the time, the upstart circuit was in its second season and had eight teams. The next season, the Ryukyu Golden Kings joined the fray as an expansion team.

The NBL, consisting of former corporate teams, was the other league that joined forces with the bj-league.

In a series finale against the Yokohama B-Corsairs on Monday, January 3, Osaka Evessa guard D.J. Newbill scored a game-high 44 points to lead his team to a 98-69 road win and a series split.

The Penn State alum made 16 of 23 shots, including six 3-pointers. He also had seven rebounds and seven assists for the Evessa (13-13).

Newbill, who is averaging 22.5 points per game, had his previous season-high scoring games on October 17, when he dropped 37 on the Shimane Susanoo Magic.

A trio of matches marked the start of the Japan Rugby League One’s inaugural season on Saturday, January 9.

The JRLO, a 12-team circuit, replaced the Japan Rugby Top League atop the Japanese rugby hierarchy this year. The Top League consisted of players on professional contracts and players who were corporate employees of their respective squads. The Top League began in 2003.

League One’s first match was set for Friday night, January 7, but was canceled after six Saitama Panasonic Wild Knights players tested positive for COVID-19. The Wild Knights and the Kubota Spears Funabashi Tokyo Bay were penciled in to play the inaugural match in the capital city’s New National Stadium.

Israel Folau, 32, sparked the Shining Arcs with two tries. The Australian notched his first try in the fourth minute. He added another in the 76th.

Folau had been sidelined for about two years since Rugby Australia tore up his contract after he made controversial remarks on social media that were labeled homophobic.

Ex-Wallabies player Liam Gill told Fox Sports Australia that Folau will be a dynamic player in 2022 in Japan.

“I dare say once he plays this season of the Japanese League One, he’ll be considered one of the best in the world again,” Gill told the website.

Scottish Premiership club Celtic’s Japanese player contingent has increased from one to four, it was announced last weekend.

Maeda, who was tied for the J. League lead in goals (23) in the 2021 season, has moved to the Glasgow-based club on loan until June. Published reports indicate the team is planning to offer him a long-term contract in the coming months.

For the 24-year-old Maeda to remain with Celtic beyond the loan, his new Scottish team would owe Marinos £1.7 million GBP (about ¥267 million JPY, or $2.31 million USD), which the Glasgow Evening Times dubbed a “compulsory clause to buy at the end of the season.”

Hatate, a 24-year-old defender, and Ideguchi, a 25-year-old midfielder, have agreed to four-and-a-half-year deals with Celtic.

“Clearly, I am well aware of their attributes and I think in bringing all three to the club we are bringing even more quality, personality and energy to the squad to work with the players who have done so well for us already this season,” Postecoglou told reporters.

Postecoglou, who managed Maeda at Marinos before accepting the Celtic job last year, has high hopes for the three newcomers.

“They are all really at the peak of their careers, ambitious to achieve more success and I am sure at this particular time we will be getting their best years,” Postecoglou said.

“I am delighted to have secured these players so early in the transfer window, I look forward to working with them and myself, my backroom team and the rest of the squad will be making sure we help them settle into Celtic as quickly as possible.”

Yushiro Hirano has taken an important step toward his goal of reaching the National Hockey League.

The AHL is the top tier of North American minor league hockey, one step below the NHL.

Hirano shined for the Cincinnati Cyclones of the ECHL (formerly known as the East Coast Hockey League) before Abbotsford signed him. In 25 games for the Cyclones, Hirano had 16 goals and 13 assists.

In 2019, the Hokkaido Prefecture native became the first Japanese player to appear in an AHL game, when he laced up his skates for the Wilkes-Barre/Scranton Penguins.

With a big lead after the opening day of the Tokyo-Hakone College Ekiden, the Aoyama Gakuin University runners maintained their strong form on the second day to capture the program’s sixth event title.

There are five stages on the first day and five on the second day in the distance-relay event, which features 20 universities.

Aoyama Gakuin manager Susumu Hara, whose team held what proved to be an insurmountable lead of 2:37 heading into Day 2, hailed his runners’ teamwork and effort.

“We surpassed the greatest team of the past, and that is due to these amazing students,” Hara was quoted as saying by Kyodo News. “There is an Aoyama Gakuin method, and the athletes apply themselves and excel within that method. But, more than that, each individual is proactive, identifying every issue that stands in his way and tackling it.”

Naomi Osaka withdrew from the Melbourne Summer Set women’s semifinals before her match against Veronika Kudermetova on Saturday, January 8.

“I had a lot of fun playing here in Melbourne. Unfortunately I have an abdominal injury which I need to rest and prepare for the Australian Open,” said Osaka, who had taken a break from tennis since losing in the US Open third round in September, in a statement.

The Australian Open commences on January 17.