Tokyo is often considered a foodie’s paradise, with Japan’s capital having more Michelin-starred restaurants than any other city in the world. From the chaos of Tsukiji Market—where sushi of all types entice both locals and foreigners alike—to cozy izakaya serving yakitori, ramen shops, and vegetarian-friendly restaurants, there seems to be something for everybody. However, if one ventures out from the famous mega-city, they will experience many traditional Japanese foods that, while having less international recognition, would unquestionably please any self-described gastrophile.

The cuisine of Yamanashi and Kanagawa prefectures offer a decent introduction for those willing to venture outside Tokyo. Aside from stunning views of Mt. Fuji, stunning autumn leaves, and easy access to Fuji-Q Highland, the small town of Fujikawaguchi (often simply referred to as Kawaguchiko) offers an interesting noodle-dish for those who like udon called “hoto.” Its origin is a bit of a mystery; however, one popular theory contends the daimyo Takeda Shingen created hoto for samurai under his employ to eat before going to battle. Others contend the dish originated in China—possibly from Shanxi Provence—and later was introduced to Japan during the Nara Period. Regardless, modern hoto consists of unusually broad, flat noodles and local vegetables in a rich miso broth. These noodles are prepared in a manner similar to dumplings and served in an iron cauldron making for a hearty meal. Hotou Fudou is perhaps best known for its high-quality hoto, but many shops encircling the picturesque Lake Kawaguchi served this regional dish. 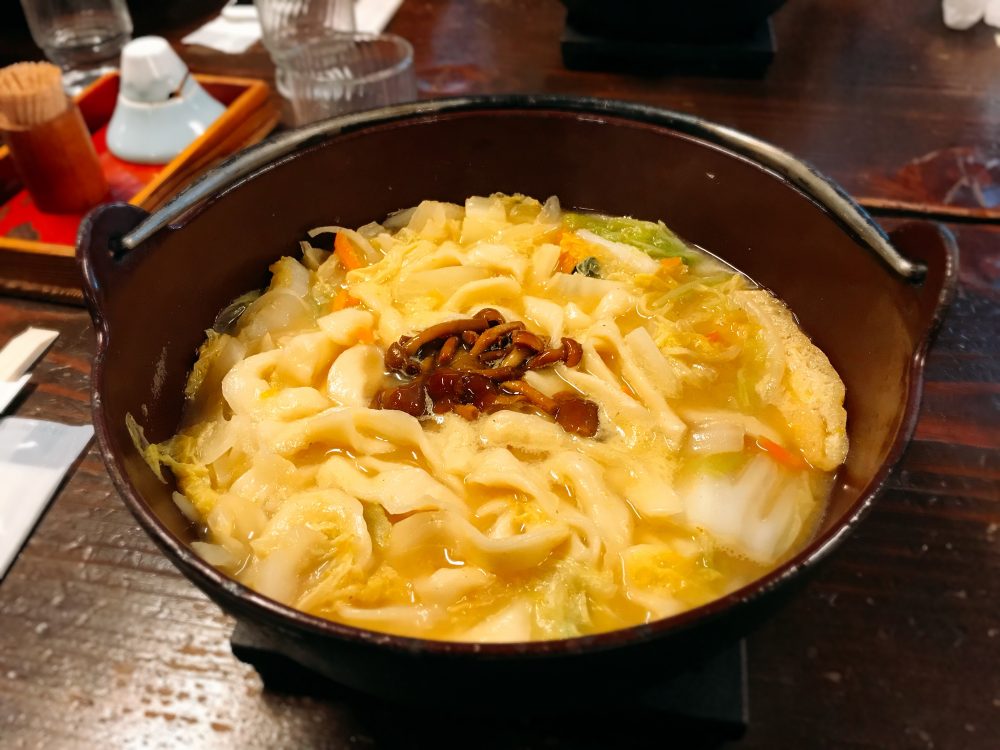 A short bus or train ride to Hakone, tucked away in the neighboring prefecture of Kanagawa, brings one to a hot spring filled, volcanic crater, known as Owakudani—meaning the Great Boiling Valley. This admittedly ominous sounding location is the ideal place for trying kuro-tamago. Basically, an ordinary chicken egg, the shell turns black due to being boiled in local hot springs. With a distinct sulfur aroma, local tradition holds that for each black egg a person eats, seven years are added to one’s life. Eating more than two is not suggested, however.

Dangerous conditions have previously caused the hot springs, where the black eggs are produced, to close. In fact, production of the black eggs was temporarily suspended in May 2015 because increased levels of sulfuric fumes were being released from the geysers. Luckily for casual visitors and onsen aficionados, regular activities resumed in April 2017. 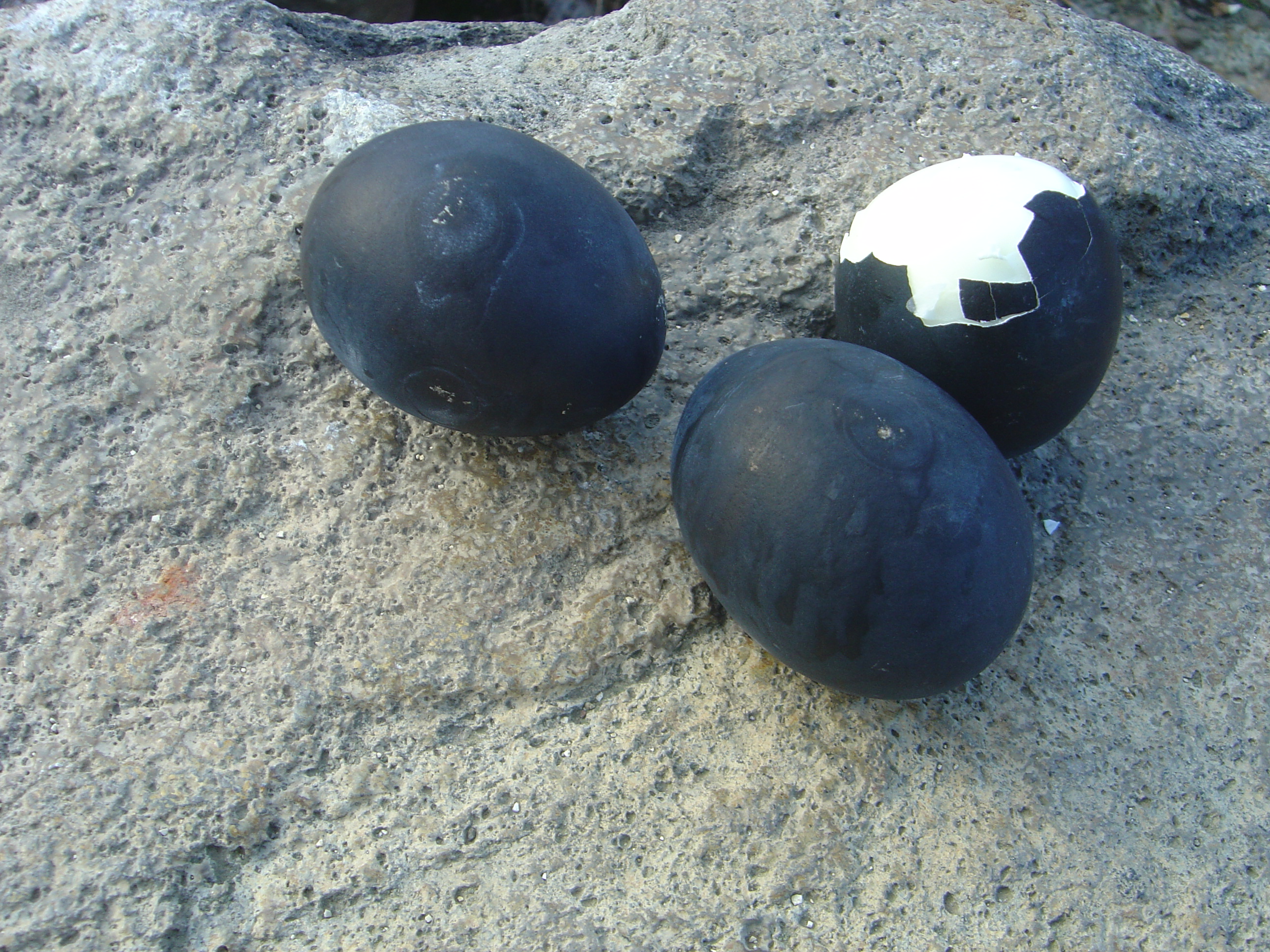 While relaxing in a local onsen, try Hakone’s iconic black eggs—they’re only 500 yen

For those who like soba, Hakone also provides tororo and yama soba. The first refers a soba that one dips into a bowl of grated nagaimo—a type of tuber. Tororo is a sticky, white, batter-like cream that usually is mixed with other ingredients like wasabi, green onion, and other vegetables. People usually either love or hate tororo soba, just as with natto. Conversely, yama soba can be served warm, but with a “plop” of gratted raw Japanese mountain yam on top. Tofu is another local favorite that can be experienced in a wide array of tempting dishes—owing, in part, to Hakone’s water, sourced from local mountain streams. 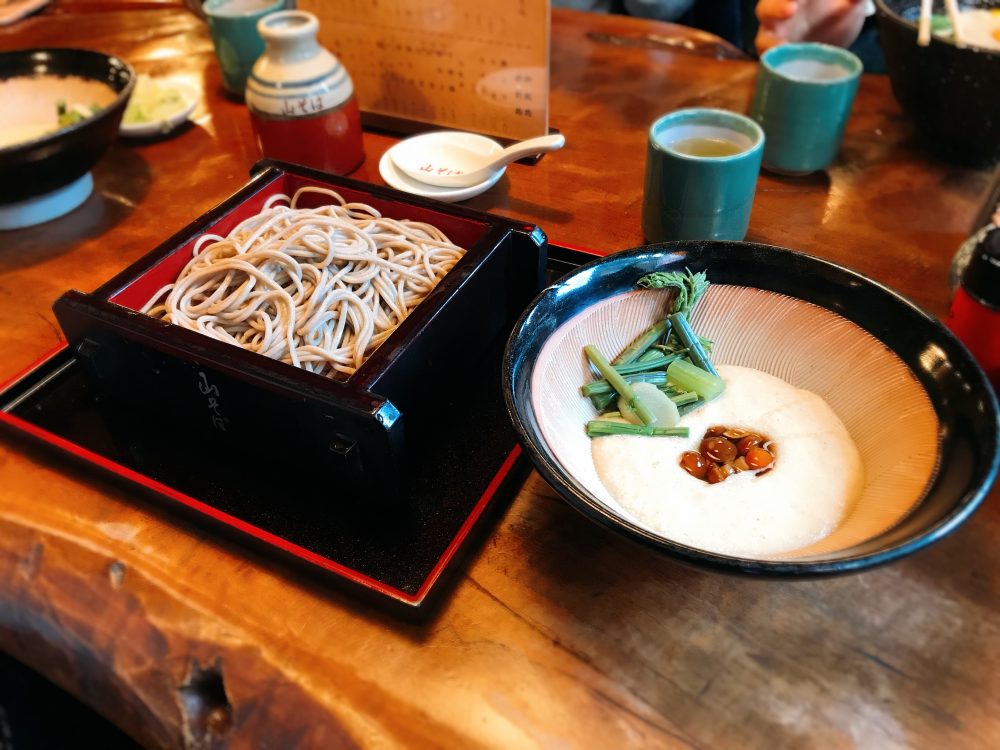 While not for everyone, tororo soba is nonetheless a local favorite

This only represents a small taste of the various local cuisines that can be experienced just outside Tokyo. Seemingly a world apart, Kawaguchiko and Hakone are, nonetheless, easily accessible from Shinjuku. Traveling via train, the most direct route to Kawaguchiko from Shinjuku Station is the Limited Express. Upon arriving at Otsuki, where you need to make a quick transfer to the Fujikyu railway, the whole trip is just over 2 hours to reach Kawaguchiko Station. Alternatively, you could use a highway bus from Shinjuku, Shibuya, and/or Tokyo Station. It’s a cheaper option—costing about 2,000 yen—but schedules vary at each station. If you’re heading to Hakone, the express train (Odakyu Line) from Shinjuku Station is a reasonable option—costing about 1,190 yen and taking 2 hours. However, you should consider getting a Hakone Freepass, which covers a round-trip on Odakyu express trains and most local transport in Hakone as well. This two-day pass also gives you discounted admission to 50+ attractions in Hakone, including the famous hot springs. The famed Japanese Bullet Train (also known as the Shinkansen) is yet another option for getting to Hakone. Thus, one does not have to forgo the internationally recognized gastronomic experiences of Japan’s capital to experience regional cuisine, all while in the shadow of Mt. Fuji.