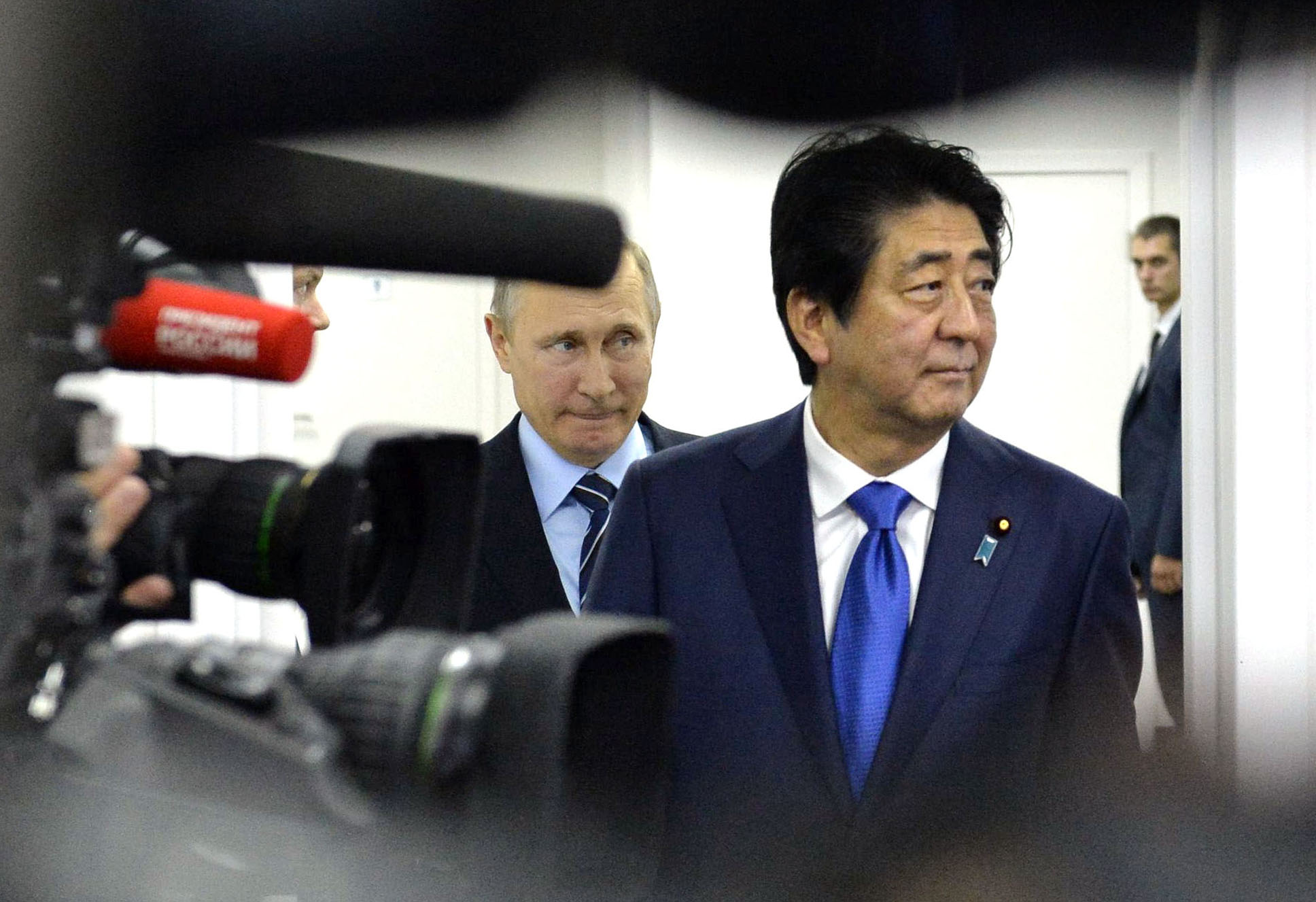 On May 6, 2016, Prime Minister Shinzo Abe emerged from a meeting with President Vladimir Putin in Sochi, Russia, to tell the waiting press, “I have a sense that we are moving towards a breakthrough in the stalled peace treaty negotiations.” He continued by unveiling a “new approach” to bilateral relations, consisting of enhanced economic cooperation in eight key areas, including healthcare, energy, and technology. The underlying aim is to demonstrate the value of ties with Japan and thereby induce concessions from Russia on the dispute over the Northern Territories (known as the Southern Kurils in Russia), four islands seized by the Soviet Union at the end of World War II, which continues to prevent the signing of a peace treaty.

Following another productive meeting in Vladivostok in September, it was agreed that Putin would travel to Japan in mid-December for an informal summit with Abe in his home prefecture of Yamaguchi. Expectations began to grow that this could be the moment when the long-standing territorial question might finally be resolved.

In addition to Abe’s statement in Sochi, Japanese optimism has been driven by the belief that several factors now point towards a deal. Firstly, Putin and Abe are both unusually powerful leaders, meaning that they have the potential to overcome domestic opposition. They also have good personal relations, developed over the course of 15 previous meetings. The hope is that, in the course of extended one-on-one discussions in Yamaguchi, the Japanese leader can convince his Russian counterpart of the merits of a deal. Furthermore, Japanese optimists find encouragement in the current weakness of the Russian economy, believing that low oil prices and G-7 sanctions will make Russia willing to consider territorial concessions in return for promises of investment.

Shaped by this thinking, Japanese media began to speculate about the details of a deal. In particular, the Nikkei newspaper, with likely government encouragement, reported in October that Japan would propose an agreement that would see the return of the two smaller islands (Shikotan and Habomai), plus joint administration over the larger islands (Kunashiri and Etorofu in Japanese, Kunashir and Iturup in Russian) similar to the system of condominium exercised by the United Kingom and France over Vanuatu prior to 1980. Rumours were simultaneously spreading that the government was planning a snap election in January 2017 to profit from the success of the December summit.

Having reached such great heights, expectations fell back to earth in November. First was the arrest of Aleksei Ulyukaev, the Russian minister who had been overseeing economic cooperation with Japan, on corruption charges, followed by Russia’s deployment of anti-ship missiles on Kunashiri and Etorofu. In early December, the Russian side even rejected the Japanese government offer of an Akita puppy as a partner for the dog that Putin received from Akita prefecture in 2012.

However, it truly became apparent that a breakthrough would not be achieved in Yamaguchi on November 19 when the Russian and Japanese leaders met on the sidelines of the APEC summit in Peru. Following an unexpectedly long meeting, a visibly disappointed Abe informed the media, “It’s not easy to make a big step forward, but I would like to move forward step by step.” With the Japanese leader repeating this wording several times, the message was clear that, while agreements on economic and other issues will be concluded during Putin’s visit, the public should not expect major progress on the territorial question.

Many in Japan have interpreted this apparent change in Russia’s position as the result of Donald Trump’s surprise election as U.S. president—since Trump seeks better relations with Putin, Russia’s international isolation will end and Moscow’s need for closer ties with Japan will be significantly reduced. It has also been proposed that Foreign Minister Sergei Lavrov, who takes a harder line on the territorial question than Putin, has succeeded in steering Russia away from any territorial deal.

Although plausible, neither theory is correct. Russia’s position has not changed—there never was a significant probability of the territorial impasse being overcome in Yamaguchi. Japanese optimism was always ill-founded. To understand why, it is necessary to understand how this dispute is perceived within Russia and how Russia regards contemporary Japan.

First, while the Japanese may consider that the disputed islands were illegally seized from an already-defeated Japan, within Russia the territory is regarded as being legitimately transferred as a consequence of Soviet victory in World War II. Consequently, Russians emphasise the Yalta Declaration, in which the United States and United Kingdom promised that the “Kurile Islands shall be handed over to the Soviet Union.” It is also commonly argued in Russia that it was the Soviet Union’s entry into the war with Japan on August 9, 1945, and not the atomic bombs, that caused Japan’s ultimate surrender and as an active participant in the victory, the Soviet Union was fully justified in enforcing claims on Japan.

Given this interpretation, there is exceptionally strong opposition within Russia to the return of the islands. According to a recent poll, 78 percent oppose giving up all four and 71 percent are against transferring even the two smaller ones. As a consequence, the Russian government has consistently asserted that a resolution of the territorial dispute is dependent on Japan’s unconditional acceptance of the results of World War II, a demand most recently made on December 2 by Deputy Foreign Minister Igor Morgulov. Since this is something the Japanese government is unwilling to do, it was never probable that a territorial deal would be achievable in Yamaguchi.

Secondly, while in Japan it is commonly believed that Russia needs Japan’s assistance to develop its economy, Russia takes a different view. Japanese investment and technology are certainly welcome, but not worth territorial concessions. Instead, the Russian perspective is that Russia has plenty to offer Japan in return, not least energy exports, so economic cooperation is mutually beneficial.

It should also be noted that Japan is no longer regarded as so important a partner following years of economic stagnation. This is notable from Russia’s new Foreign Policy Concept of November 2016, in which, within the section listing priority countries within Asia, Japan is ranked, not only after China and India, but also after Mongolia.

Finally, it must be remembered that all of the disputed islands, with the exception of Habomai, have long-established Russian populations. The status of these approximately 17,000 individuals represents an additional obstacle to resolution of the territorial dispute. In particular, with Putin having presented himself as the guardian of all Russian people when intervening in Crimea in 2014, it is especially doubtful that he would now permit the abandonment of Russian citizens to rule by a foreign power.

In conclusion, it is unlikely that a breakthrough on the territorial dispute will be achieved in Yamaguchi. What is more, since this is due to deeply entrenched Russian opposition, and not merely short-term developments in 2016, there can be no expectation of this changing any time soon. While economic and security cooperation should continue in 2017 as part of Abe’s “new approach”, there is little prospect this will lead to a territorial resolution that is acceptable to Japan.

James D.J. Brown is associate professor of political science at Temple University, Japan Campus. Follow him on Twitter at @JamesDJBrown